Every year, my neighborhood arts organization, Crosstown Arts, holds a huge vegan-friendly dinner at which artists propose public arts projects and the diners vote on their favorites. It's called MemFEAST, and in years past, it's always been held in my own neighborhood, Crosstown. But this year's event was held in a little arts district just up the street from mine.

The Broad Avenue Arts District is just adorable, and when I'm not hanging out in my own neighborhood, Broad is typically where I go. It's in the Binghampton neighborhood, and about 10 years ago, the stretch of shops was mostly vacant and suffered from a high crime rate. But in the past few years, thanks to some dedicated grassroots-style neighborhood activism, Broad has emerged as a hip little district with art galleries, a dance collective, an arts social club, bars, and other cool stuff. It was also one of the first Memphis neighborhoods to get bike lanes because the residents just painted their own! How DIY! The neighborhood beacon is this old rusty, graffiti-covered water tower.


But with the neighborhood experiencing such a renaissance, it seems kinda silly to leave the water tower all rusty. Tonight, Crosstown Arts expanded out of my Crosstown neighborhood to hold "MemFEAST on Broad," where diners voted on murals and sculptures for the water tower. While we heard presentations from three artists chosen as finalists, we dined on amazing vegan food prepared by Chef Miles McMath!

When we arrived, the tables were decorated with vintage knick-knacks from the Cleveland Street Flea Market. And all the pieces had price tags in case anyone wanted to bring one home. 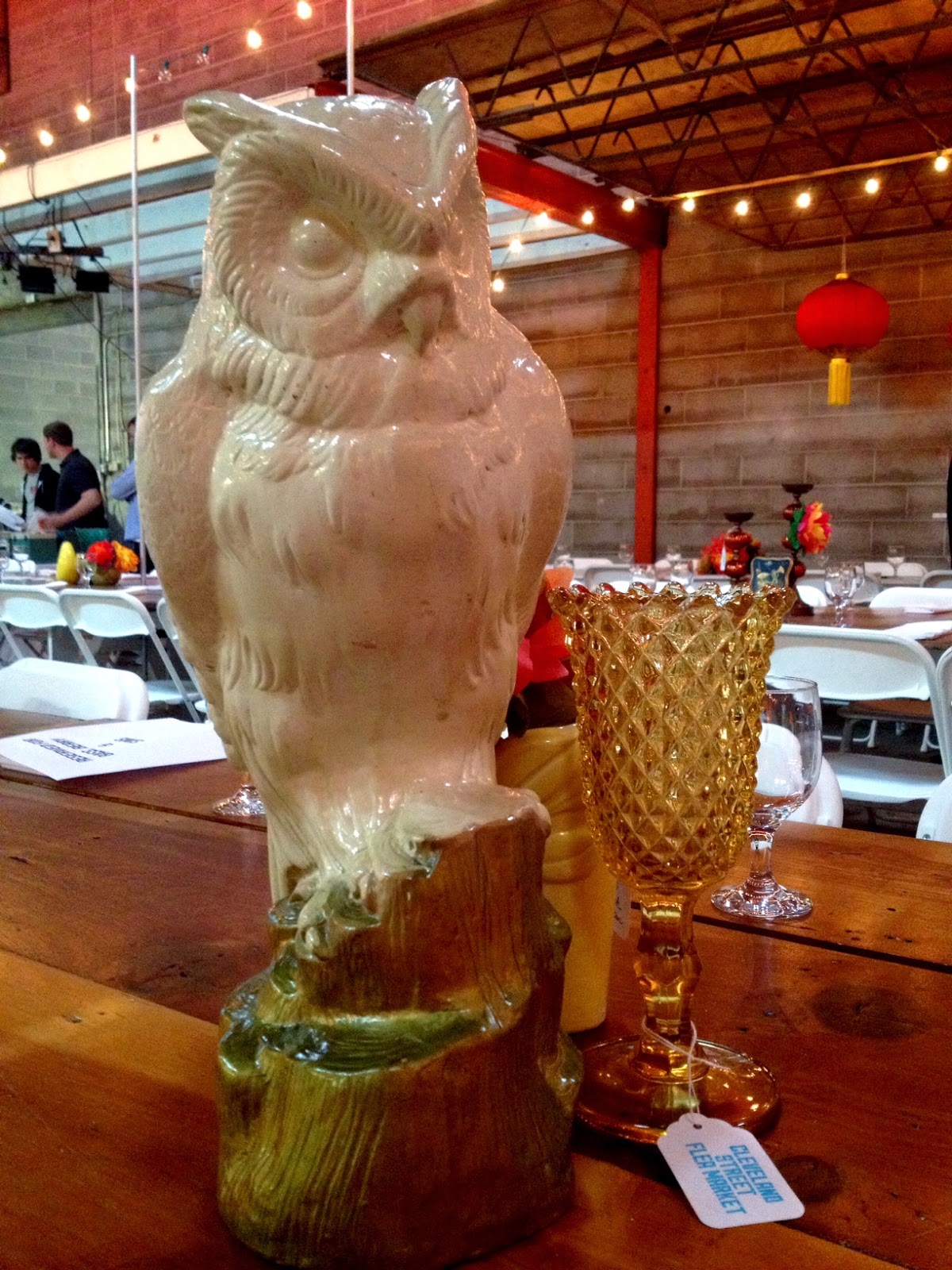 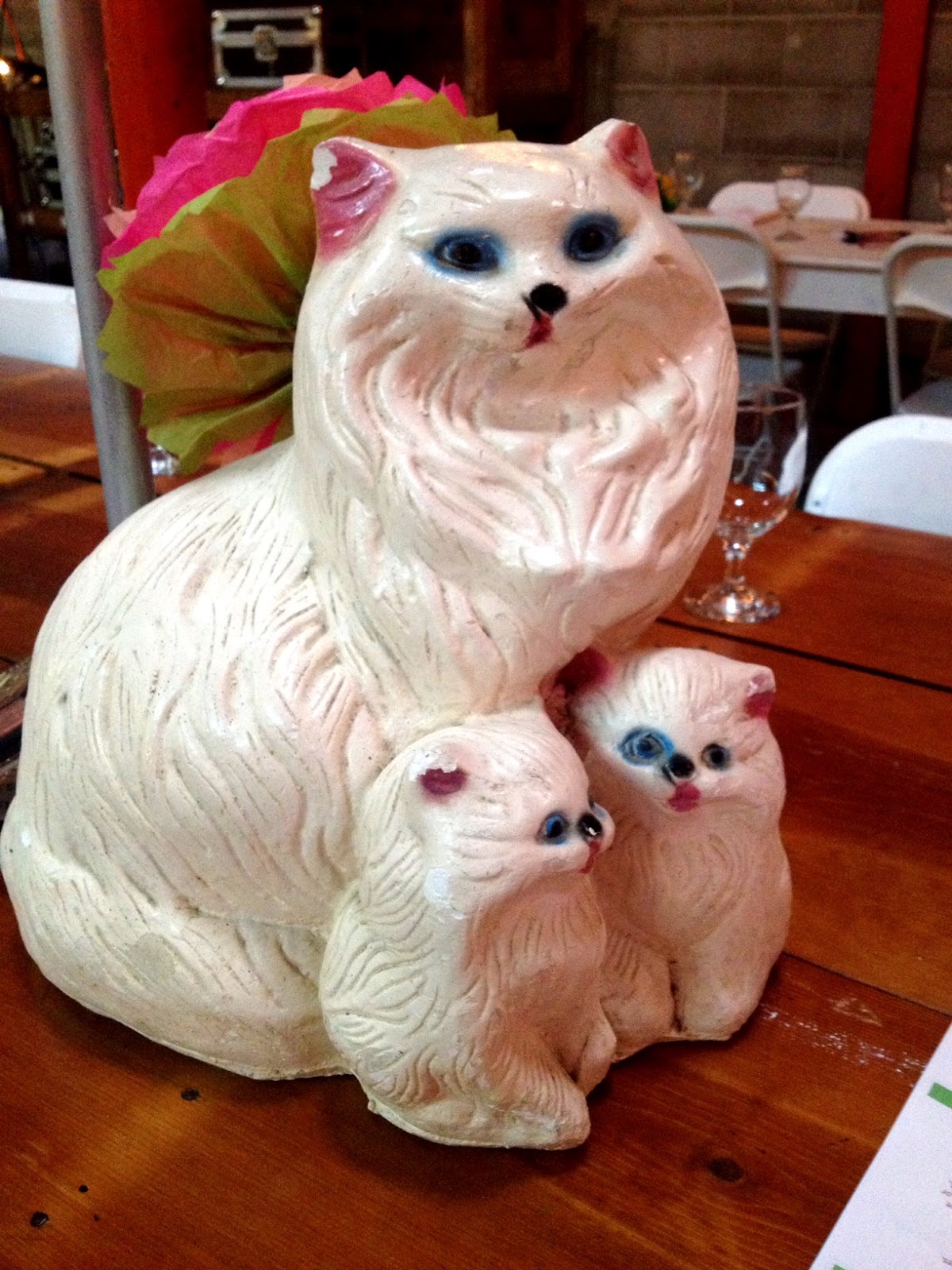 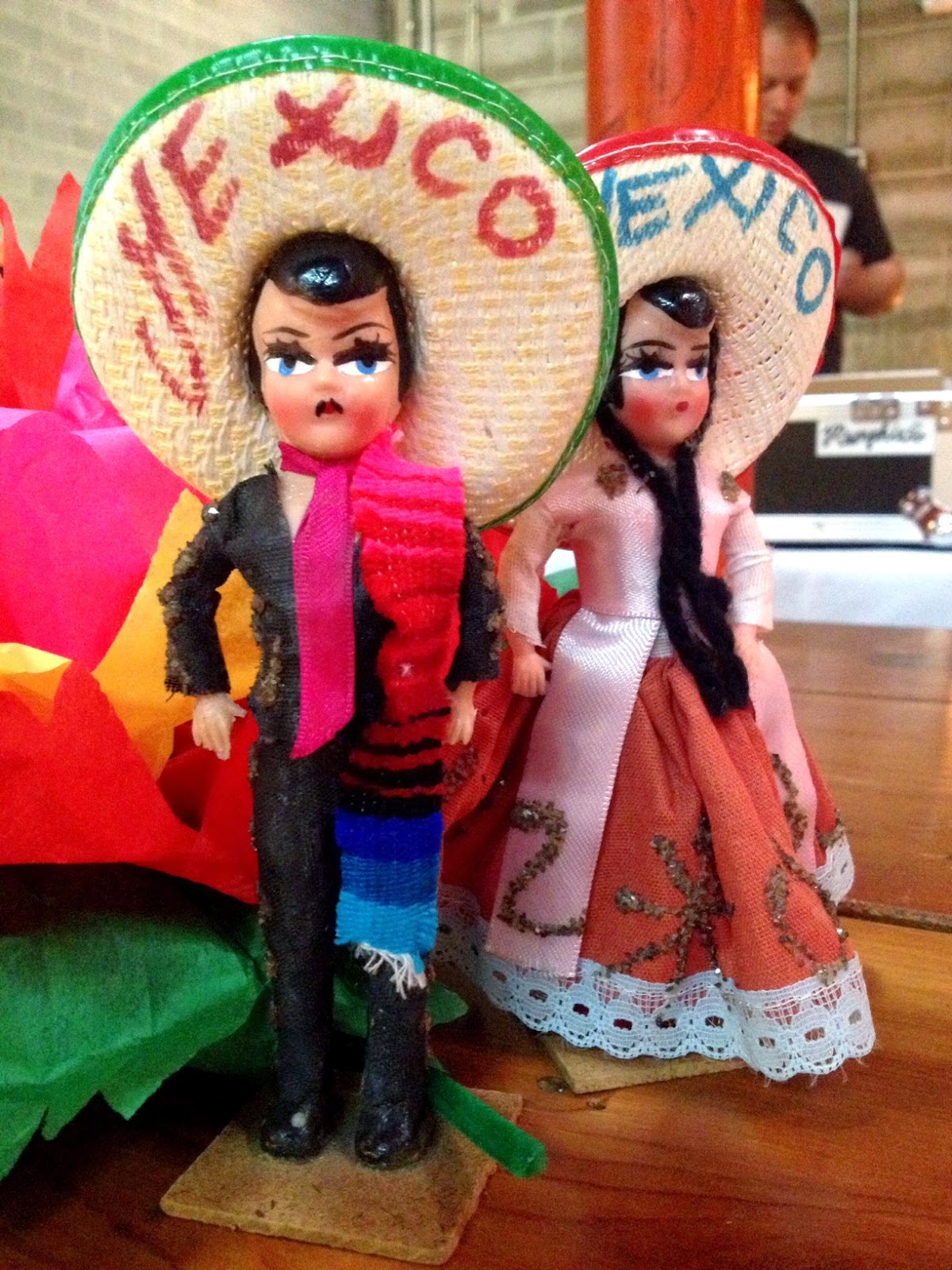 I've been to all five MemFEASTS over the years (there are recaps here, here, here, and here), and the menu is always either totally vegan or vegan with a meat or cheese option. Last year, Chef Miles McMath made a totally meat-free slider bar, but this year, there were options for all diets. Each was labeled with a little sign. 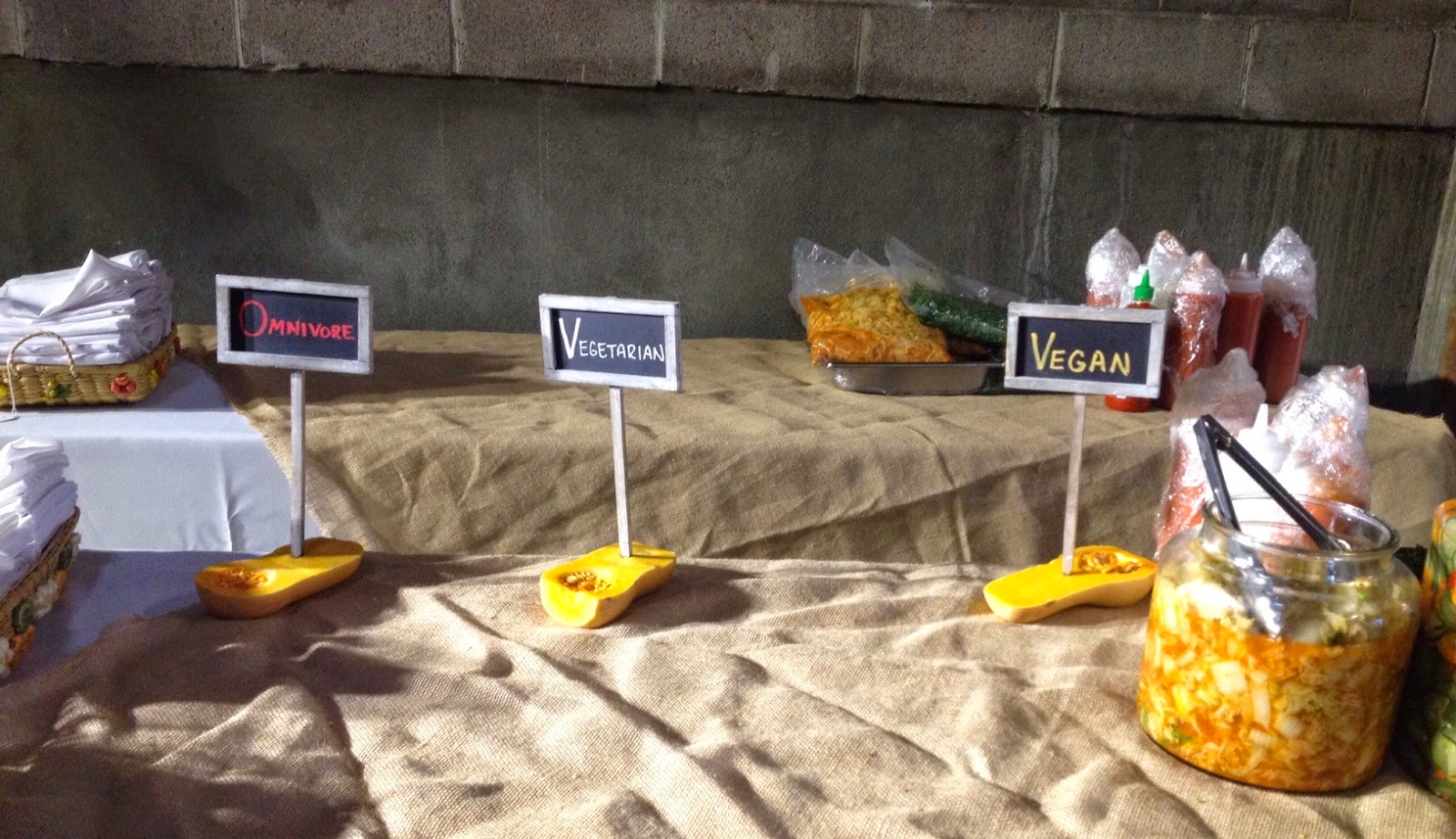 The food theme this year was global street snacks, and everything was made with food that was pesticide-free, GMO-free, regional, and fair trade when possible. Before the buffet began, servers passed out appetizers. The vegan option was Sour Fruit with Chile and Salty Sugar (jicama, green mango, pomegranate, mango, grapefruit, nectarine). 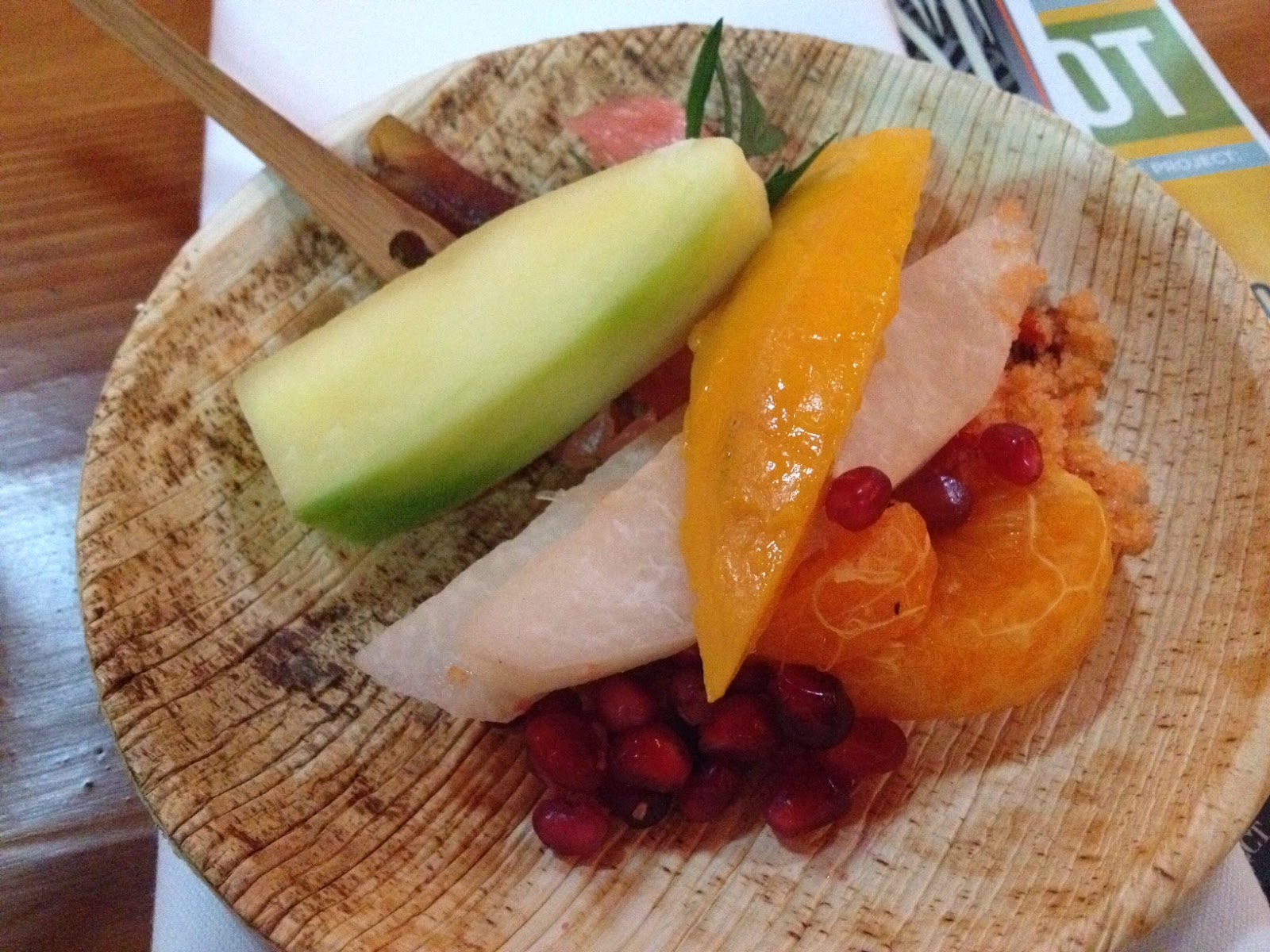 They also passed out Kale Pakoras (deep-fried kale!!!!), but it was served with a vegetarian yogurt sauce. I passed on those, but Amanda, whose husband works for Crosstown Arts, made sure I got a vegan pakora without the sauce later on. I know this looks crazy, but it was delicious! I mean, deep-fried kale! That purple stuff is some kind of chutney. 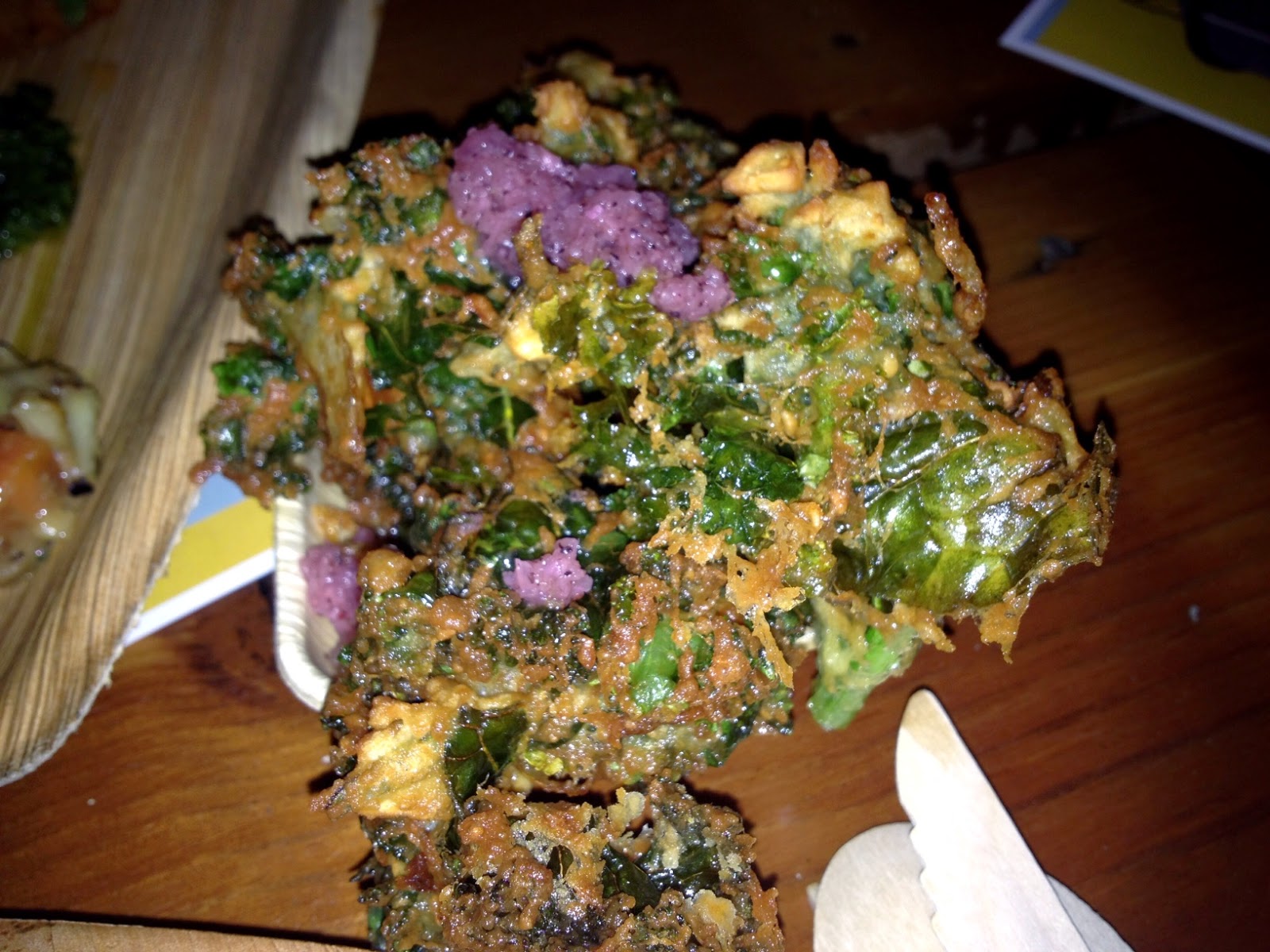 After the apps were passed around, we watched a dance performance by the Collage Dance Collective. And then it was time for the buffet! Each county had its own table, and everything was served in individual plates, so I had quite a stack of plates going by the end. There was Kimchi Slaw and Freezer Pickle Tacos from the Cambodian Taco Shop. These are great! Love some homemade pickles. 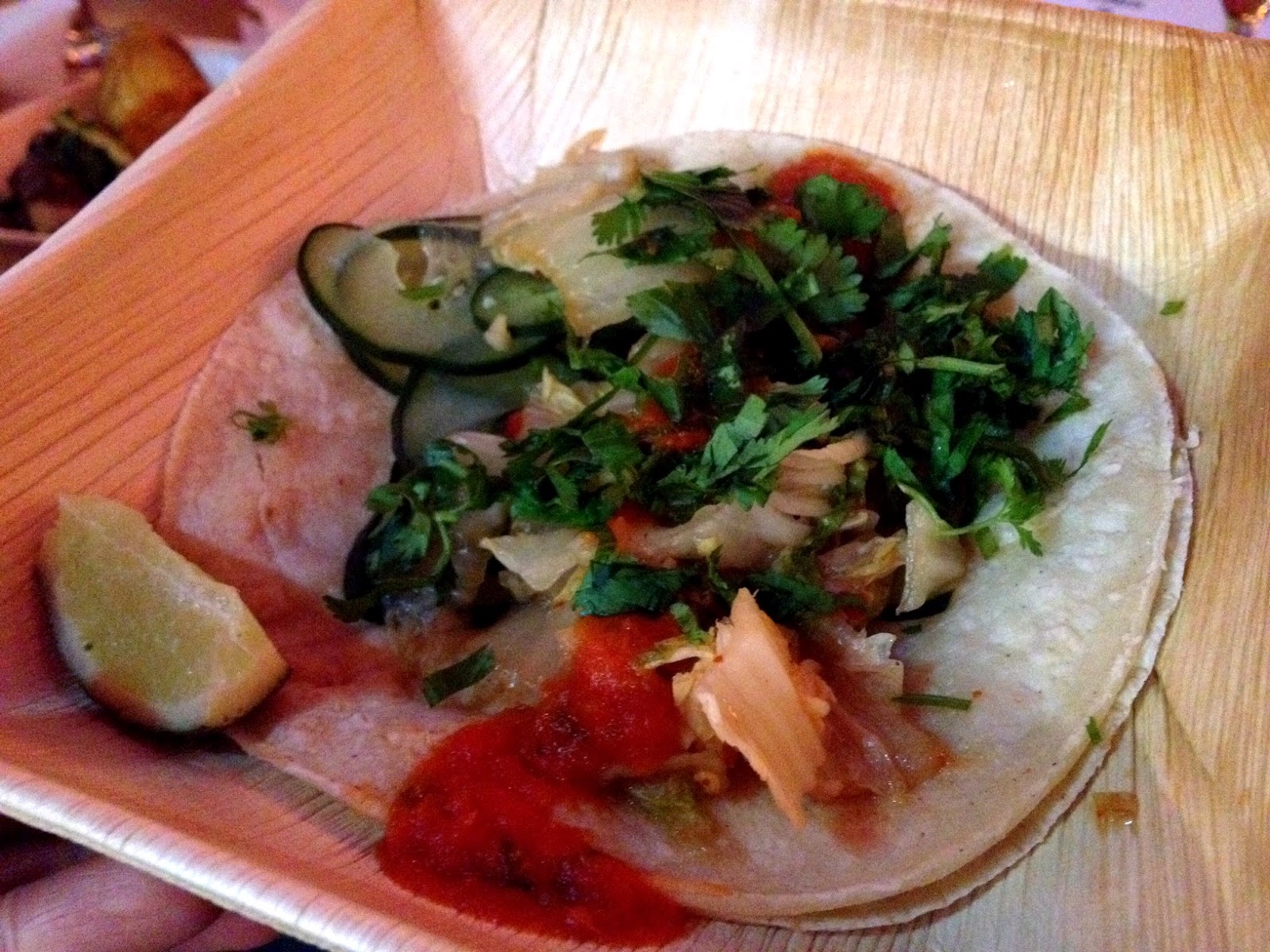 But the Aloo Gobi, Chana Masala, and Naan from the Delhi table was even better. 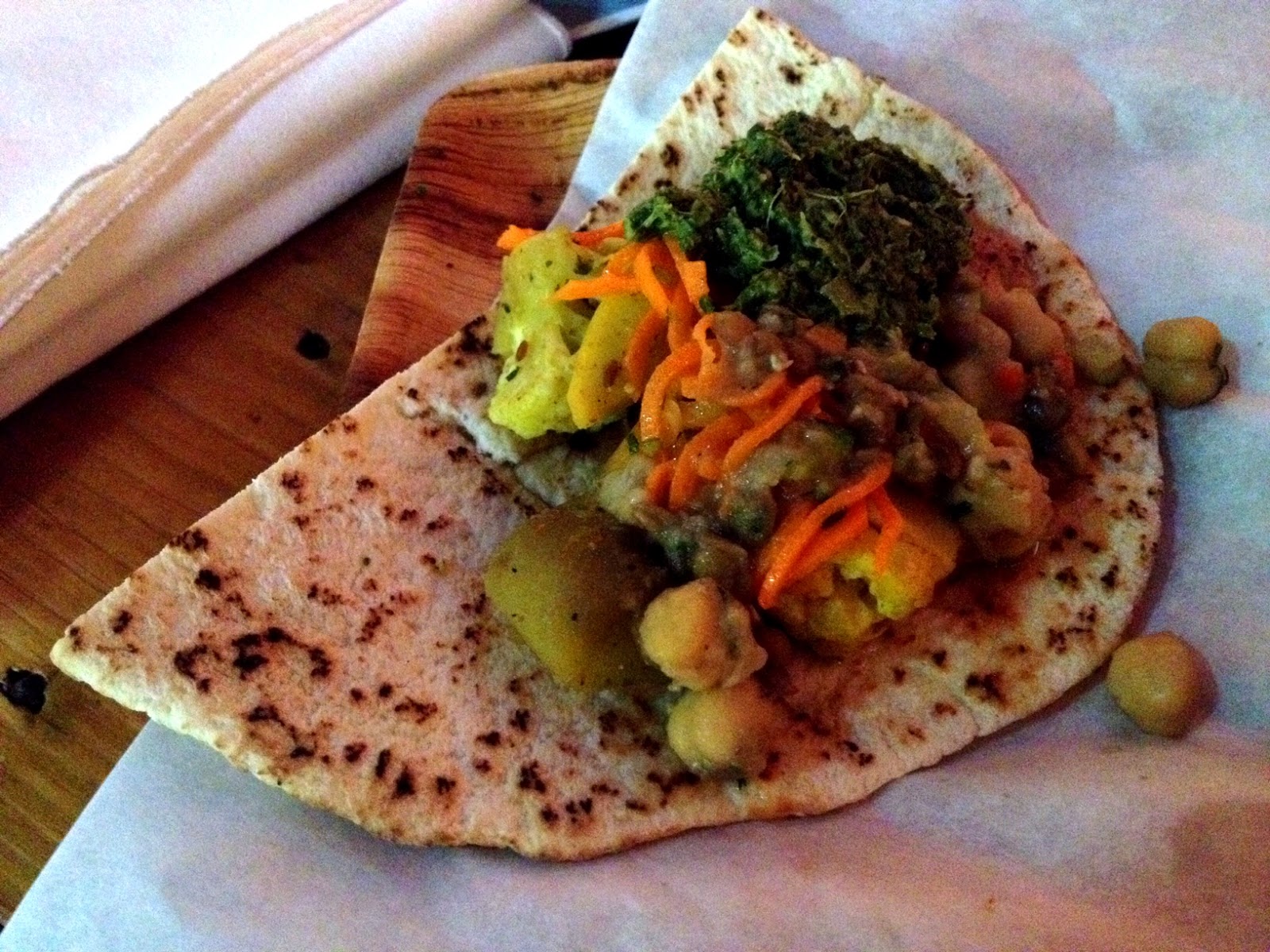 There was an amazing vegan Yuca Patty topped with Plantains and Avocado and served with Chimmichurri and Butterbean Guacamole from the Colombian table. 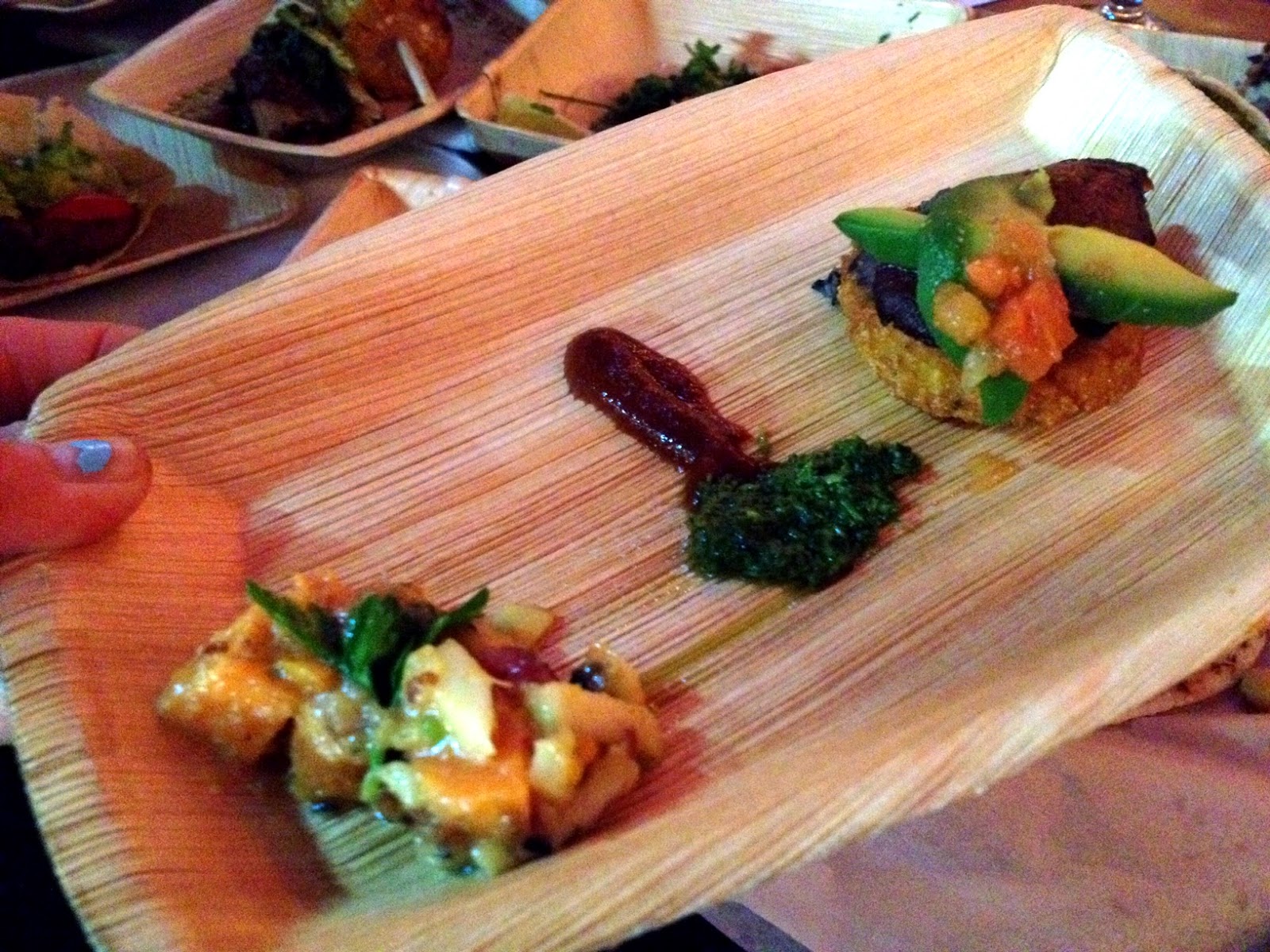 My second-favorite dish of the night was this Vegetable Falafel with Field Pea Hummus and Olive Salad on Pita from the Moroccan BBQ stand. 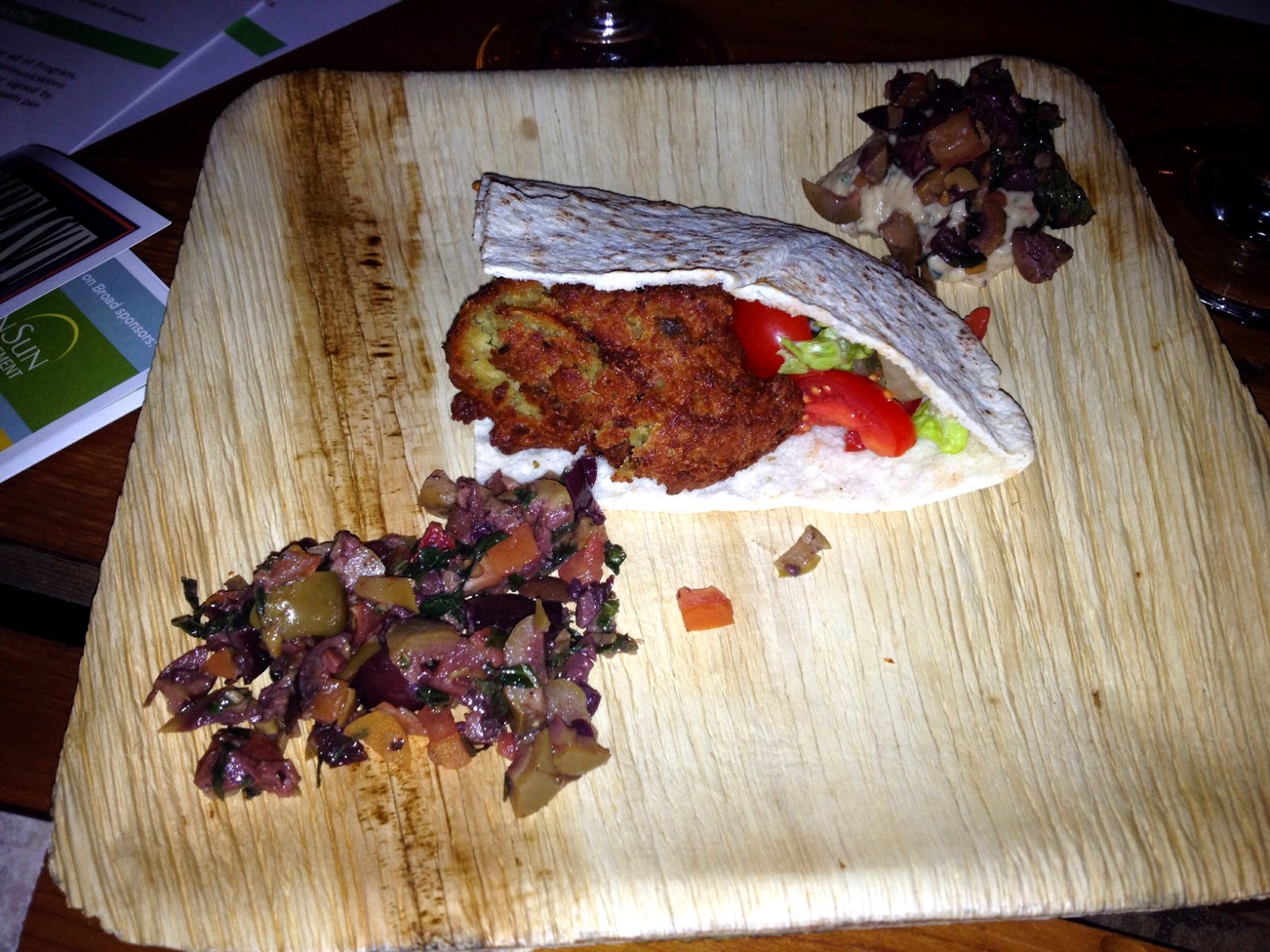 But, for me, the star dish of the night was this Vegan Tamale made with Local Veggies and topped with Pickled Okra. I just love tamales, and this one was perfect. The Grilled Corn on the side was very tasty as well. 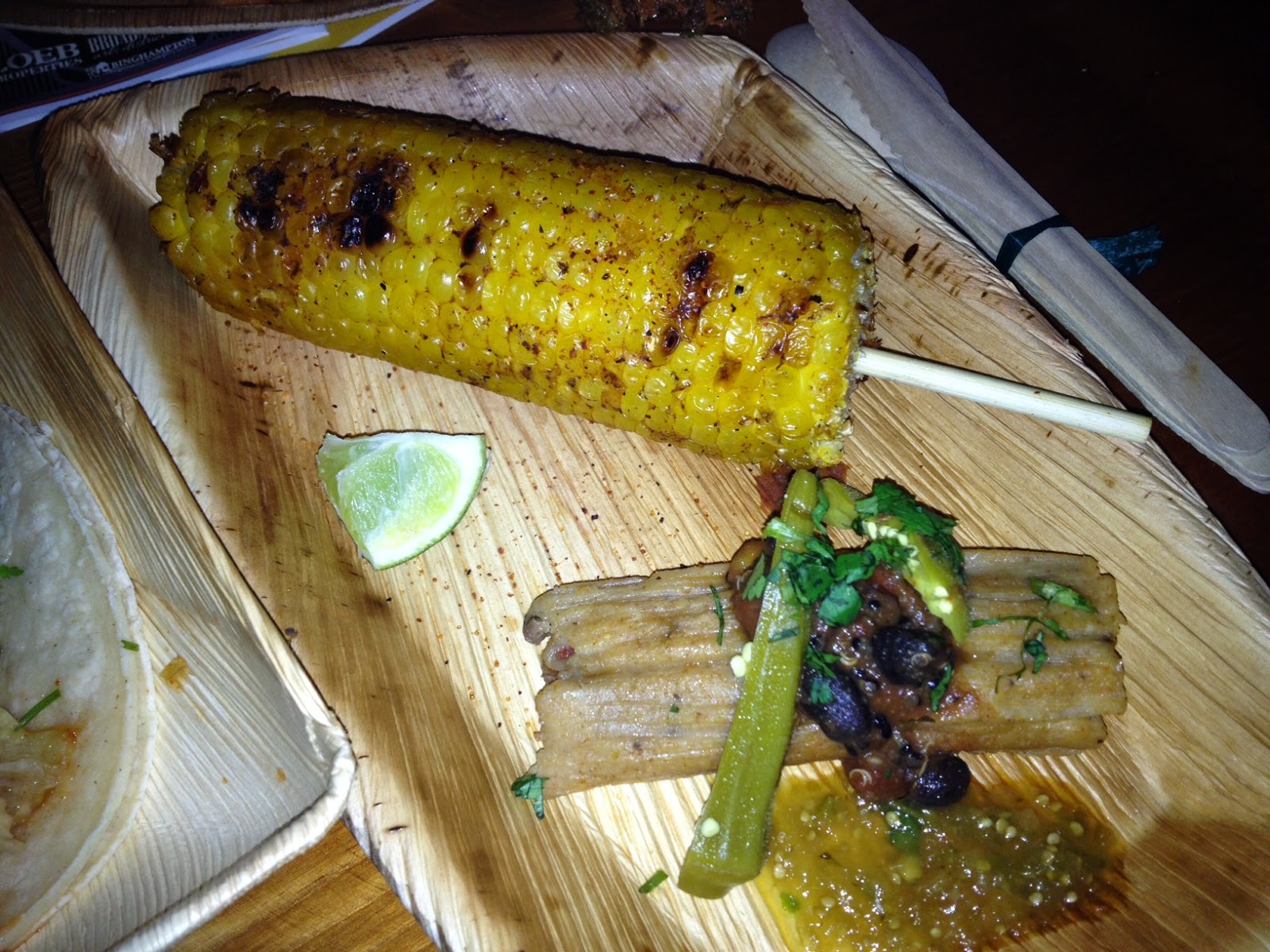 As we dined, local rapper Marco Pave performed. And then we heard the artists' presentations. In the end, the winning proposal by artist Suikang Zhao involved some cool LED lighting on the tower with a metal sculpture wrapping around it. It's hard to explain, but I think it will look way cool.

Also, you know I couldn't resist buying something I don't need, right? All night, I kept staring that cat piggy bank pictured above. It looks like something my Me-Maw has in her house, and since I'm really an old cat lady at heart, I just had to have it. Besides, it was only $25! 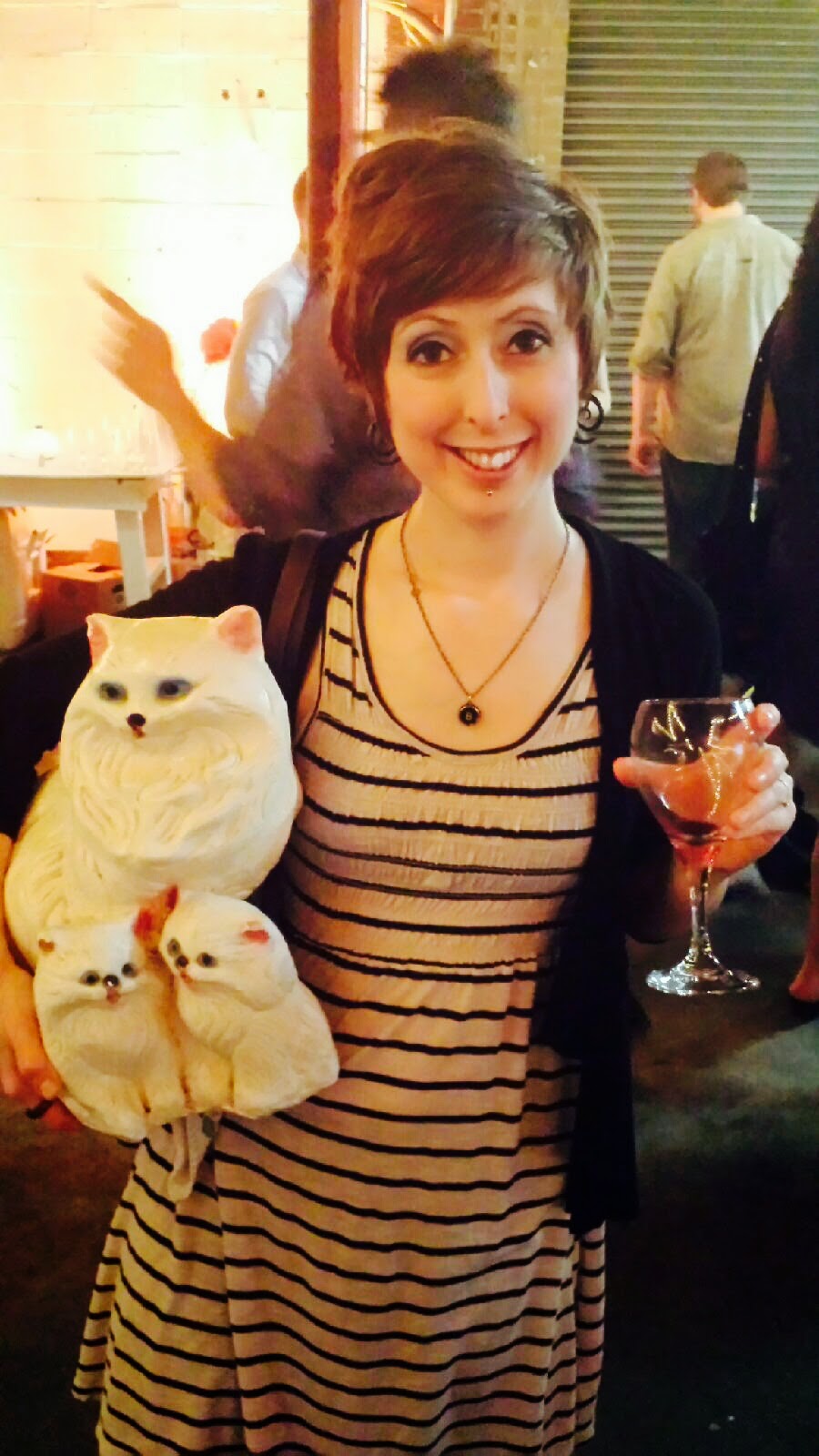 OMG I was going to say that the cat looked just like something my grandma used to have, though I think hers was grey. I would totally find a spot for that in my house!

It sucks I waited to long to buy my ticket but the food Gods smiled on me because there was no Asian themed table. All is well.

I totally would have bought that cat piggy bank too, ha!

I TOTALLY would have snagged those kitties too.

All the food looks amazing, especially the street corn. YUM!