I first heard about Ya Ka Mein on Joni Newman's blog, Just the Food. She posted a recipe for this Cantonese-Creole fusion noodle soup on her blog in honor of Ash Wednesday: 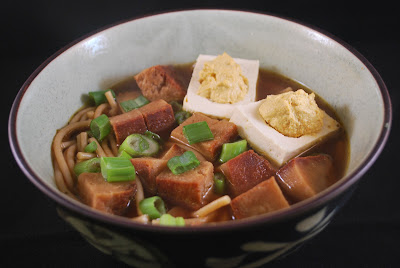 I'm not even sure where to begin because this stuff is that awesome. There's a homemade broth made from vegan beef stock, Cajun seasoning, smoked paprika (I was out, so I substituted Liquid Smoke), and Old Bay seasoning. The noodles are whole wheat spaghetti, and the seitan is fried and delicious.

Joni includes a recipe for homemade seitan, but I had some leftover seitan roast in the freezer. I thawed that out and fried it in a little coconut oil.

About those deviled tofu eggs? Delicious. Joni includes a recipe for those too. They're a little different from the Deviled Tofu Bites in my cookbook in that the tofu filling is made with extra-firm tofu instead of silken. And there's no Vegenaise. I had lots of the filling leftover, and I can't wait to try some spread on toast later this week. But I digress.

Ya ka mein is also known as "Old Sober." It's often touted as a Fat Tuesday hangover cure, and I'm sure it really does help fight off the next-day booze sickies. After all, we all know ramen noodles make the world's best hangover cure, and this dish isn't a far cry from my beloved ramen.

According to Wikipedia, no one quite knows how the soup originated. But legend has it that Ya Ka Mein was created by Chinese immigrants who moved to NOLA from California to build railroads and work on sugar plantations. Others claim African American U.S. troops invented Ya Ka Mein after they returned from the Korean War as a way to recreate a noodle dish they had in Korea. Who really knows? Regardless of its mysterious origins, it's amazingly delicious!
Posted by Bianca at 10:26 PM

YUMMY! I need to make another batch of that goodness.