I can't remember when I first tried vada, spicy Indian lentil doughnuts. I think it may have been at an Indian restaurant in Nashville several years ago. But I do remember being in love with these savory fritters from the very first bite.

For one, they're shaped like doughnuts. And doughnuts are magical. But they have that lentil/gram flour flavor so common in South Indian food. And that flavor is also magical. I've made them from scratch before, but as much as I love fried food, I don't always feel like dragging out the deep fryer. So when I spotted these frozen vada in the Mediterranean Grocery on Park, I just had to have them! 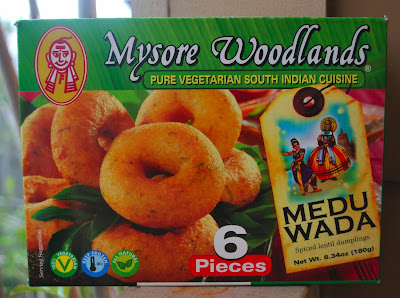 Vada are typically served with some kind of dipping sauce, like a chutney or sambar (a soup made from dal and veggies). The Mediterranean Grocery did have frozen sambar from the same brand. But it looked like a small one-serving package. I wanted more than that. I knew just what cookbook to turn to for a homemade Spicy Sambar recipe — The Lotus & the Artichoke by Justin P. Moore!

Justin's Spicy Sambar has been on my to-make list since he gifted me the book. It's loaded with toor dal (yellow pigeon peas), potatoes, carrots, chiles, peas, tamarind, tomatoes, onion, and lots of Indian spices (garam masala, coriander, cumin, and asafoetida). 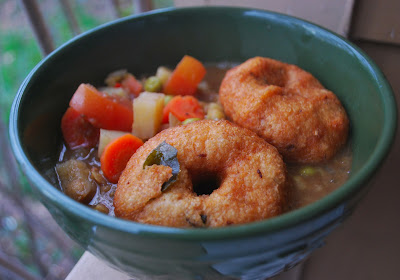 Delicious! This homemade version has way more veggies than any sambar I've ever had at an Indian restaurant. But I like it that way. It's almost like a vegetable soup with Indian spices. And that toor dal (kind of like red lentils) really lends the sambar that classic flavor that I associate with the soup.

I didn't realize this until I started researching sambar with vada for this post, but the combo is a popular South Indian breakfast staple! I prefer my breakfasts savory and all, but I'd never think to eat something like this in the morning. It seems a better fit for dinner, so let's just say I had Indian brinner.
Posted by Bianca at 9:30 PM

I've never had vada! There's a lot of Indian food on the blogs tonight and I'm really eyeing this bowl.

oh my god Bianca, this post is making me drool. One of my favorite things about going to India is getting to eat sambar wada for breakfast. love love love love love. I've never seen frozen wada - how awesome! South Indian breakfasts really are the best. Also, I contributed to the Lotus & Artichoke kickstarter - so I should be getting my copy sometime soon. I'll definitely try the sambar!

I'm absolutely going to be on the lookout for wada now! You're right that anything donut shaped must be magical. We don't have any South Indian restaurants in my town (although there are a few South Indian options at my regular place). So I'm going to have to seek it out the next time I travel!

Mmm I had some Vada and Dosa this weekend at my newly discovered south Indian Restaurant. They had iddlis with sambar too, heaven! But I've not tried making any myself. Well done the vada look the real thing!

Oh cool! I just found this! Thanks for the shout-out Bianca. I haven't had vada in a while. I really need to change that!