I love burgers. Back when I was just a baby vegetarian trying to survive in my small Arkansas hometown, I lived on veggie burgers. This was the 90s, and while vegetarianism was popular then in major cities, it was still a foreign concept in Jonesboro, Arkansas. We didn't even know what "vegan" meant.

But the Kroger in my hometown eventually started carrying Morningstar Farms products, so at least I had veggie burgers (they weren't vegan burgers, but that was okay then). When I got to college (also in my hometown), our cafeteria served veggie burgers. That was one of the few veg options, besides cheese pizza and the salad bar. You'd think that after years and years of burger patties, I'd be sick of them.

But no. I'm sick of Morningstar and Boca, oh yes. But fun, different burgers? No way! One of the best things about being vegan is burger diversity. Omnis, they have, um, what like 2 burger options (beef or turkey). But vegans, we're a creative bunch. We make our own burgers out of all kinds of stuff.

Take for example these Denver Omelet Burgers from The Best Veggie Burgers on the Planet by Joni Marie Newman: 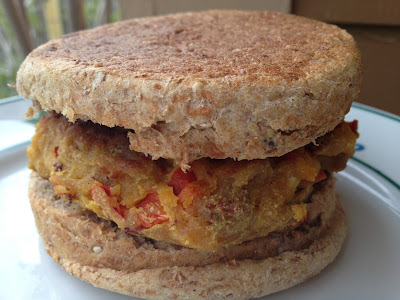 That, my friends, is a breakfast burger. It's a tofu omelet patty with sauteed peppers and onions, seitan "ham," and homemade TVP bacon bits stirred in. And it's served on an Ezekial sprouted grain English muffin with salsa. Here's an inside shot: 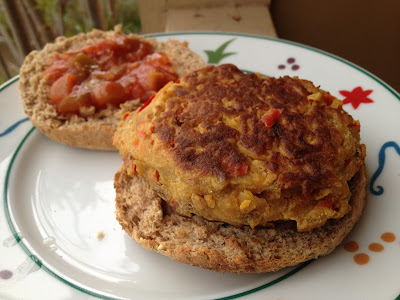 Yep, it's pretty much genius. But everything from the fabulous Ms Newman is astounding, so no surprise there. If I'd have known I'd be eating these kinds of burgers 18 years after giving up meat, I'd have been that much more confident that I'd made best decision of my life back in 1994 when I swore off meat forever.
Posted by Bianca at 10:28 PM

This cookbook has been woefully neglected in my cookbook cupboard. Clearly this needs to change. That sandwich looks amazing!

I only recently bought this book and have not finished reading it, but I already flagged a great many recipes to try. Thanks for posting this. Seeing someone else try out a recipe always helps.

I've made quite a few burgers from this book so far, and I've been wanting to try this one, but haven't gotten around to it yet! I'll definitely have to make it now!

I can't imagine growing up in Jonesboro vegan. I grew up 45 minutes away in Osceola, and I STILL have a hard time when I go home to see the family. It was only later in college (Fayetteville) that I made the transition to vegan, and that seems like a cake walk in comparison. I find myself getting really annoyed if the only option is a veggie burger, but something like this would be fine by me!

I don't think I've ever heard something as beautiful as veggie burgers for breakfast.