Years ago, when I first went vegan and the only cheese on the market was Vegan Rella, I would have never imagined that in 2013, I could go to four — count 'em — four restaurants in Memphis and order a vegan cheese pizza.

But fast forward to now, and that's exactly what I can do. Any night of the week! Memphis may not be Portland, but it's not too shabby in the vegan eats department. We've had four places that offer vegan cheese pizzas for some time, but just as one of those closed recently (R.I.P. Hi-Tone Cafe), another vegan-friendly door opened — Rock 'n' Dough Pizza Co.

This teensy little pizza joint in East Memphis only has about six tables, and as you can probably tell by the name, pizza is pretty much all they do. When I heard they had vegan pizza, I immediately made plans. And this past weekend, I finally tried the Vegan Pie: 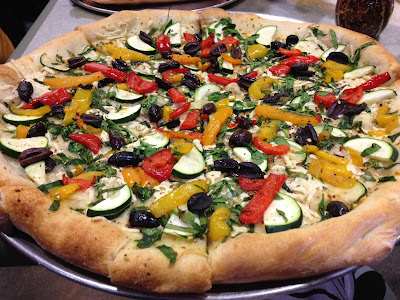 Isn't it gorgeous? This is a small, mind you. There are eight huge slices, which made four meals for me.

Atop the perfect crispy, chewy, buttery crust is a vegan white sauce, Daiya cheese, zucchini, roasted bell peppers, spinach, and kalamata olives. Probably all of my favorite toppings on one lovely pie. I really enjoy a good vegan white sauce over marinara most of the time.

My only complaint is there just wasn't enough Daiya for me. I like a cheesy pizza, so next time, I plan to request extra vegan cheese ... even if that costs a little more. I know some vegans who would rather let the flavor of veggies shine through, and they'd probably prefer less Daiya. But y'all know me. I would live on carbs and vegan cheese alone if that was healthy.

Also, you can build your own pie using vegan cheese and a huge list of veggie options.

Since the place is tiny, I'd recommend checking them out during non-peak meal times or picking up a pie to go.

(In case you're wondering about those other three places to get a vegan cheese pizza in Memphis, that would be Imagine Vegan Cafe, Trolley Stop Market, and Mellow Mushroom).

Oh man, that looks amazing! Having grown up right outside of Memphis and now living in Little Rock, I keep thinking I need to venture back and have a vegan food weekend! There certainly seem to be a lot of places! We don't, that I know of, have any restaurants offering vegan cheese, but US Pizza is pretty good about slathering my veggie pies with their awesome home made guac.

[ Smiles ] Honestly speaking, I am yet to come across any vegan cheese to my liking; they are either too salty or the texture is a little rubbery.

However, I have to give you thumbs up for engaging yourself in some delicious vegan pizza.

I am a vegan who likes to keep it simple with fruits and vegetables.

That is so great that you have so many options! I love that vegan options are becoming more mainstream :) That pizza looks amazing!! It's loaded with veggies, yum! I know there are vegan pizza places in NY but I don't know of any that serve Gluten Free vegan pizza. Wah! I miss pizzeria pizza!

My mouth is watering just staring at that perfect-looking pizza. Maybe I should make a trip down to Memphis. Haha! That aside, I love the idea of making your own pie. I know some pizza parlors that offer it too, which make it great for the pizza lovers who happen to be vegan or on a diet. Thanks for sharing, Bianca!