This is a vegan public service announcement: Imagine Vegan Cafe is moving to a new location! The city's only full-service, vegan comfort food cafe is relocating to 2299 Young Avenue, just a few blocks down from their current home near the corner of Cooper and Young.

I know most of my readers aren't in Memphis, but I wanted to post this for those who are and for any readers who may be planning a trip to Memphis in the near future. In case you're not familiar, Imagine is the place to go for down-home comfort food —fried vegan chicken, BBQ sandwiches, vegan cheese pizza, vegan chicken fried steak, as well as scrumptious vegan desserts by Swell Baked Goods (chocolate chip cookie dough cupcakes, pumpkin cream cheese blondies, cinnamon rolls, and cookie sandwiches to name a few regular treats). It's pretty much my second home since I've eaten there nearly every week for two years (sometimes twice a week).

Anyway, for almost 2 years, Imagine has been at 2156 Young. But the landlord is raising the rent, so they've found a new place at 2299 Young, just down the street.

The last day in the current location is Friday, March 29th, so be sure and stop by if you're local. Getcha one last platter of "turkey" cutlets and gravy with vegan mac & cheese before the big move. They don't expect to re-open in the new space until mid-April. I'll keep y'all posted here.

Since they're moving, they have to print new menus with the new address. So they'll be making a few changes to the menu. I have it on good authority that they'll be adding the Big S'mac (a vegan Big Mac-style sandwich with two non beef patties, special sauce, lettuce, cheese, pickles, onions, on an dairy-free bun) to the new menu. They've been offering it as a special lately, and I finally tried it tonight. 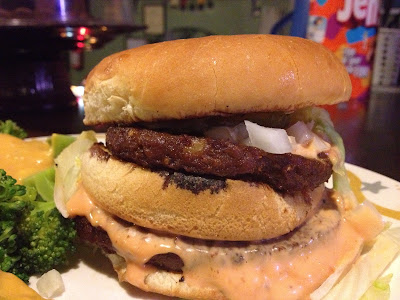 So messy and delightfully sinful. I can't say that I ever had a Big Mac in my meat-eating days. But I can say that this sandwich was delicious. There's a vegan Thousand Island-style sauce, Imagine's killer vegan cheese, and the best-ever Gardein Beefless Burgers (Have y'all tried these? Best veggie burger on the market).

They'll also be removing a few items that haven't sold as well. So I'm sad to say that we'll be saying goodbye to the Vegan Sloppy Joe. 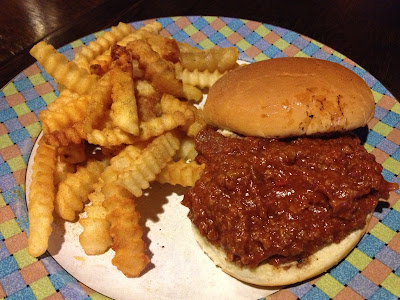 My partner Paul is about the only one who orders this sandwich with any regularity. He's an omni, but he loves this Sloppy Joe. It's tasty. But I'll admit that I typically opt for something a little cheesier.

Anyway, save the date for mid-April. And look for the new Imagine Vegan Cafe at 2299 Young Avenue.
Posted by Bianca at 10:44 PM

My husband heard of vegan sloppy Joe's and his face lit up. So this reminds me that I need to make him some. Thanks for sharing a yummy veg restaurant in Memphis. Hopefully we will get out there within 2 years.

Oh, I haven't tried Gardein's veggie burger yet. Thanks for the tip! I'll have to check it out, especially now that it's warm enough to grill again.

That place sounds awesome and I need that cheeseburger in my life!