I love, love, love cooking shows. But as you know, options for vegan cooking programs are slim. I can watch the meat stuff on the Food Network and pretend I'm looking at seitan or Gardein, but that pretty much sucks. So I was thrilled when I heard some of my favorite chefs — Terry Hope Romero, Miyoko Schinner, and Toni Fiore — were coming to public television with the Vegan Mashup cooking show.

Unfortunately, I'm not one of the lucky people who lives in an area that broadcasts Vegan Mashup on public television. So I waited for the show to come out on DVD, and then I scored a great deal on the disc through Vegan Cuts.

I've watched two episodes of the six on the DVD so far, and I'm in love. Each episode features several dishes, one prepared by each chef and then a dish made by a guest chef (My fellow Memphian/soul food magician Bryant Terry guest cheffed on the first episode!).

Anyway, I'd a total nerd, and I've decided to type out each recipe as it's shown on the screen during the show. And I've made a promise to myself that I will cook every recipe from the first season throughout the year, so you'll see a series of Vegan Mashup posts here.

To start, I picked two recipes from the Party Foods episode. Now, I considered waiting until I had another party at the house, but who knows when that will be? Why not make party food for everyday eats? I made a meal of these appetizers and washed them down with a little red wine, so I could pretend I was having a party with myself.

I made the Gruyere and Pear Croustades by Miyoko Schinner: 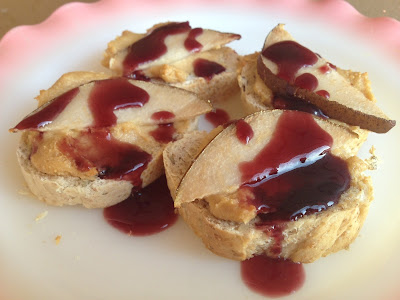 Those are crostini topped with homemade aged cashew gruyere, pear slices, and a sweet red wine sauce. Wow! These flavors just belong together — the tanginess of the aged cheese, the sweetness of the pear, and the dry flavor of red wine. This recipe will be a keeper for entertaining. By the way, it's also in Miyoko's awesome Artisan Vegan Cheese cookbook, so if you have that book, you can make these too! The making rejuvelac and aging cheese takes about a week, so plan ahead.

I also made Toni Fiore's Tempeh Bites with Tzatsiki Sauce: 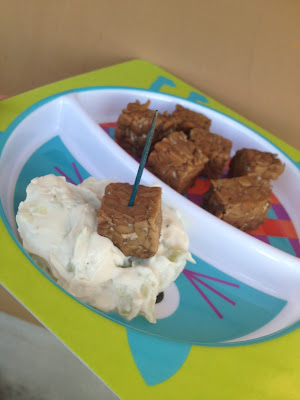 Tempeh is baked in a savory soy sauce marinade, and then it's served at room temperature with a homemade tzatsiki sauce for dipping. The sauce is made with a base of silken tofu, oil, and shredded cucumbers. In the past, I've always used vegan yogurt to make tzatsiki, but I like this tofu version better. It's thicker and creamier.

There are lots more recipes featured in the first season, so expect periodic Vegan Mashup posts. And don't forget to check the Vegan Mashup website to see if you live in a market that broadcasts the show.
Posted by Bianca at 6:29 PM

fun! I wonder if this will be on in our area? i have "vegan" set up as a standard query on our DVR... so anytime the word "vegan" comes up in the title or description of a show, we record it. Usually it's just crap, but every once in a blue moon, there's actually something of interest. I love this post!

Yum! Do you know where they did show the program? I love when chefs decide to cook vegetarian or vegan dishes on their tv programs.

Cashew gruyere? Wow. How does it taste? Was it difficult to make?

Thanks for the wonderful writeup VC!

Of course, you can request your public tv station to pick us up too!

I want reading by means of and I conceive this website got some genuinely utilitarian stuff on it!

I love cooking shows! I'll have to try this one. Sounds better than watching the Food Network and closing my eyes at the really meaty parts and praying for the rare challenge where the contestants have to (reluctantly, usually) create a vegetarian dish! lol