I've tried some new fun vegan cheeses lately, and I've been saving them all for one big cheesy post.

A few weeks ago, my daddy ordered me some Punk Rawk Labs Nut Milk Cheese from Vegan Essentials. I'd been reading the praises about Punk Rawk Labs cheese in VegNews Magazine for months and was dying to try it. He ordered the Smoked Cashew Mac and the Herb Cashew Mac: 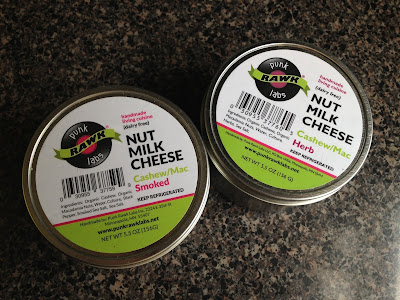 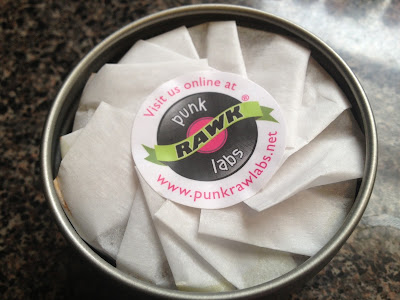 Both cheeses are totally raw and made from a blend of cashews and macadamia nuts. They have that aged cheese flavor that you get from using rejuvelac. These are the sort of fancy cheeses you'd serve with some good vegan wine at a dinner party.

I loved the Herb flavor most! It had a tangy, Italian taste: 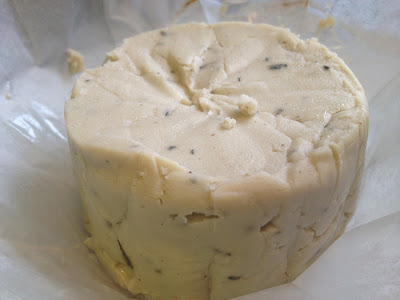 But the Smoked was coated in course black pepper. I love anything coated in pepper: 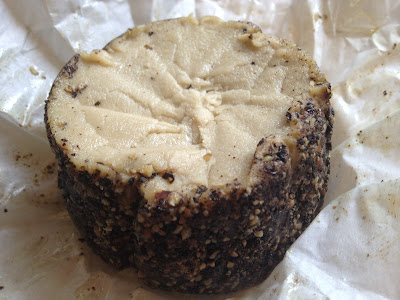 I think these cheeses are best enjoyed spread on a fancy cracker. I ate most of mine on Engine 2 Crispbreads, but I did try a schmear or two on some sandwiches: 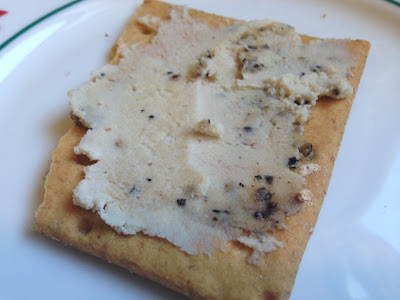 In that same order from Vegan Essentials, my daddy also ordered me a jar of Victoria Vegan Roasted Red Pepper Alfredo Sauce: 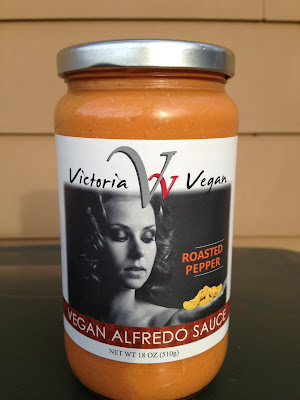 I'd also been reading about these sauces in VegNews. Victoria Vegan is a new line of vegan cream-based pasta sauces. There are four flavors, but the roasted red pepper sounded the best to me. I tried it on some whole wheat linguini: 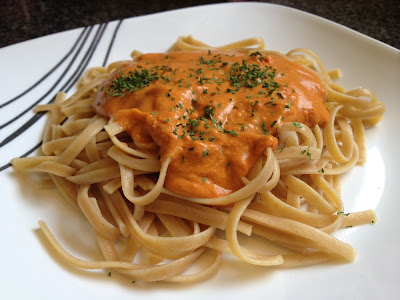 Wow!! I've made plenty of vegan alfredo recipes, and all have been pretty darn tasty. But this stuff? World's better than anything I've ever made from scratch. It tastes like real dairy alfredo with a roasted red pepper kick. It's made with cashew cream, peppers, tomato paste, garlic, pepper, and herbs. 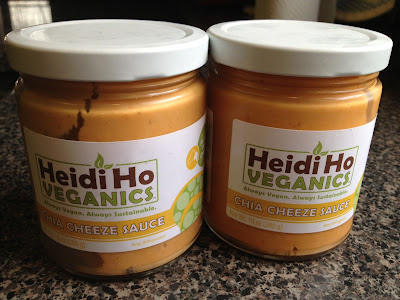 I got three jars (one was already half gone when I snapped this picture) for $18. I'd tried some Heidi Ho block cheeses in Portland during Vida Vegan Con in 2011, and I loved them. So I was excited to try their latest cheese product.

I've never met a jarred vegan sauce that I didn't love (Food for Lovers queso, Nacho Mom's, and Nacheez, I'm talkin' to you!). But this one has a very different ingredient list from the others. The main ingredients are potatoes, carrots, onions, chia seeds, and cashews. Who knew potatoes and carrots could taste like cheese?

But guess what? They do! This stuff is delicious. The chia seeds make the sauce very thick, and the flavor is reminiscent of some cheese sauce I remember from childhood. But I can't put my finger what sauce that is. 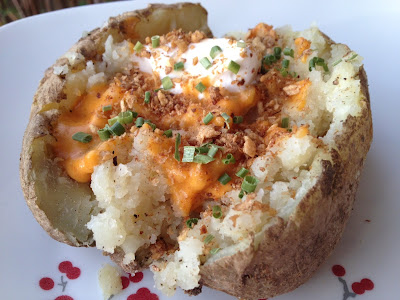 Next up: I plan to try it with nachos! And then maybe cheese fries!
Posted by Bianca at 9:42 PM

I love this post!
I bought one jar of the heidi ho cheese sauce, because I wasnt sure I'd like it enough to merit buying 3 jars. but i LOVE it! What a genius idea to put it on baked potatoes.

Also, I have been wanting to try that pasta sauce for so long (i've also seen it in Veg News). I want to try the vodka one, because there used to be a dish like that here in town (not vegan) that my husband loved.

I've been wanting to try Punk Rawk Labs cheeses for so long! They sound amazing.

I recently tried the alfredo sauce too, but I had the arugula pesto. So goood.

I've heard fantastic things about the Victoria Vegan sauces. I can't wait to try them. I'm bookmarking this so I will remember these things on my next order!

Yum! As Amey mentioned, the Heidi Ho sauce sounds similar to the VegNews mac and cheese sauce - http://vegnews.com/articles/page.do?catId=10&pageId=40, which is amazing! Potatoes, carrots, and cashews, when blended somehow magically turn into cheese.

I've seen that alfredo sauce at the vegan haven store in Seattle. Since this review looks so good I think I will try it out!

these are all things i have on my 'to try' list!

My local Fiesta market (in Houston) had a bunch of Victoria's Vegan Sauces on display this morning with some chia pasta! That place never ceases to amaze me with the vegan goodies they stock. The sauces were a little out of my budget this week, so I will try them soon!