As I've mentioned here before, my next cookbook project will feature veganized versions of trendy foods over the decades of the 20th century. It will begin with the 1900s and then move to the 1920s, 1930s, and so on.

I'm no food historian, so this involves a little research. And some foods that have been around for far longer than 1900 were still popular throughout many decades of the past century. Take for example tonight's meal. Using the Food Timeline (an awesome website for this sort of research), I learned that broiled meats, fried potatoes, and creamed asparagus were all common dinner menu items in the 1900s. Now, I'm sure broiled meats were popular long before the 1900s, but that's okay. I'm using the veganized versions of these dishes for the 1900 section.

Instead of meat, I created an easy recipe for Broiled Tofu. 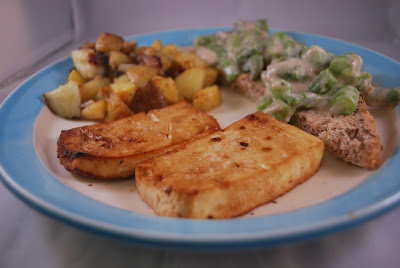 Extra-firm tofu is brushed with a soy sauce, sesame oil, ginger marinade and broiled for about 15 minutes. I'm sure they didn't use Asian-inspired marinades for their meats in the 1900s, but I'm already veganizing so I feel fine taking some creative culinary liberties.

For the Fried Potatoes, I looked no further than my own upbringing in Arkansas. My mama and my granny made fried potatoes for dinner all the time. I fried these up with a little onion and seasoning salt, and I used coconut oil for a healthier dish. And I enjoyed these Southern-style with some sweet tomato relish and ketchup. 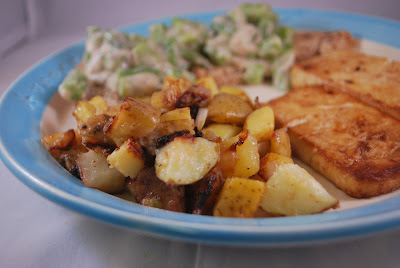 Now, I've never had Creamed Asparagus, but I read all about it. It's basically a gravy with steamed or boiled asparagus mixed in (I steamed mine to retain nutrients). It's typically served over toast points. 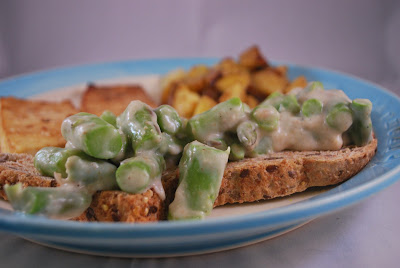 What a fun new (to me) way to serve asparagus! I typically only roast it or steam it, but everything is better with gravy. Even asparagus!
Posted by Bianca at 10:48 PM

That's a pretty awesome topic. I'm really into all types of history, and learning a little about common meals from the past make it all more interesting. By the way, thank you for the info on how you started receiving products to review!

I wonder what they used for flavoring back then? Straight up lard? Ugh! Yours looks MUCH better... so yummy! Can't wait for the next cookbook!

[ Smiles ] I don't mind eating those recipes of yours.

What recipe did you use for the gravy? This looks yummy!