It doesn't feel much like spring in Memphis. It's 45 degrees tonight, and it never got above 55 during the day. I'm so sick of this cold weather. I'm ready for 100-degree, humid Memphis summers.

But until then, I guess I'll just have to live in the now. Traditionally, eggs are eaten on the first day of spring, the Vernal Equinox. It's also called Ostara, and it's an ancient holiday that celebrates the return of the sun and the fertility of the earth. It's the holiday from which modern-day Easter symbolism was born — eggs and rabbits symbolize fertility, rebirth of the Sun is similar to the rebirth of the Son (Jesus). This is the holiday I celebrate instead of the Christian Easter, but it's quite similar actually.

Since I don't eat eggs, I always eat "eggy" vegan things on Ostara. For breakfast, I had Cream Toast: 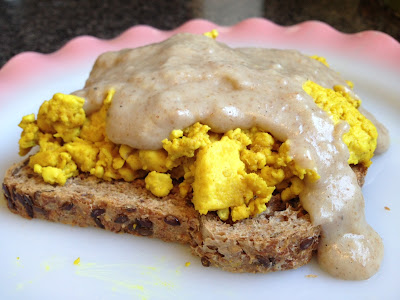 This is a recipe that I've developed for my next cookbook project, which will feature trendy foods from the various decades of the 20th century. Cream Toast dates back to at least the 1900s, probably earlier. Basically, it's toast with a buttery cream gravy and sometimes served with eggs. For mine, I made a tofu scramble and topped it with a cream gravy.

Lunch wasn't all that eggy, just leftover Irish Stew and Soda Bread from St. Patrick's Day. But for dinner, I had the Eggless Egg Salad Sandwich at Imagine Vegan Cafe: 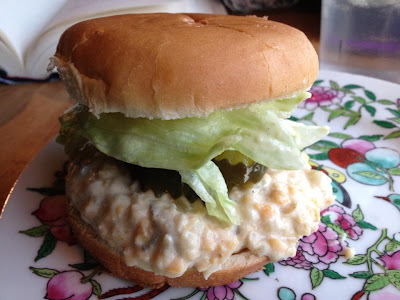 I love Imagine's eggless salad. It's made with chickpeas, Vegenaise, pickles, and plenty black salt for eggy flavor. It was even served on a lovely spring plate with flowers and birds on it.

For dessert (because holidays always demand dessert)!, I had a slice of Fluffer Nutter Cake from Imagine — peanut butter cake with vegan marshmallow cream. Unfortunately, the whole slice made it into my belly before I remembered to photograph it. Sorry!

Happy Spring! May there be plenty of warm days ahead!
Posted by Bianca at 9:57 PM

Oh the cream toast looks great! Reminds me of what my mom would make us on Saturday mornings!

Ha! Oops. Thanks anonymous. Change is made.

Your cream toast looks yummy! How do you get your tofu scramble to look so "eggy"? I still haven't figured out how to make a tofu scramble that I really like.

Hi Jess. I just press and drain the tofu, crumble into a skillet, and for this one, I added 1/4 cup nutritional yeast, some turmeric, and some black salt. Then I cooked for about 10 minutes until all the liquid cooked out. On fairly high heat.

Thanks for the tip, Bianca. I will give it a try!