Remember Miracle Whip? I mean, yea, it's still around. But if you're vegan, it's probably been years since you've had that slightly sweet whipped sandwich spread. In concept, it was kind of weird. Sweet, fluffy mayo? But somehow, when you spread it on some bread and sandwiched it up with deli meat, it worked some sort of, um, flavor miracle for lack of a better word.

Well, the days of missing Miracle Whip are over, vegan friends. Nasoya has just come out with a new NayoWhipped Sandwich Spread, and it tastes JUST LIKE Miracle Whip but minus the eggs. The Nasoya folks sent me a jar to review, plus they also sent along their creamier new version of the classic Nayonaise: 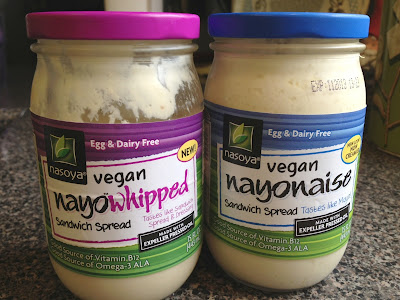 If you haven't had Nayonaise in awhile, it's time to give it another try. I'll admit that I didn't like it all that much when I first went vegan. But I like this new creamier version! It tastes more like mayo than it used to. It still has a distinctly different flavor than, say, Vegenaise or Earth Balance Mindful Mayo. It's a tad sweeter than those products but in a good way. I cracked open this jar and ate some straight-up with a spoon.

Now, about that NayoWhipped: I was just blown away by how much this stuff tastes like Miracle Whip. I decided to substitute NayoWhipped for the vegan mayo called for in the Eggless Tofu Olive Salad from Cookin' Crunk: 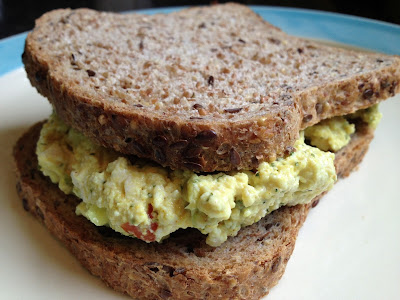 That's crumbled tofu mixed with sliced olives, onions, celery, black salt, NayoWhipped and some other spices. The result? Delicious! Of course, it's sweeter than it usually is when I use mayo. But it tastes like an egg salad made with Miracle Whip, which is always a fun change from the norm.

As a bonus, both spreads contain vitamin B12 and omega-3s!
Posted by Bianca at 10:28 PM

Wonders never cease! My mom used to put Miracle Whip on our sandwiches, never mayo. How fun that Nasoya thought to create a vegan version!

I will definitely try it when I am back in the US. Currently living in South Africa so I bring back a couple of jars when we go over to visit family! I love Nayonnaise.. can't stand Veganaise... too rich or oily or something. I love it on beetroot sammiches... yum! Also good on chip sammiches if you have never tried that (back to my UK childhood days!)

How do you get these products sent to you to review? Lucky! I've never tried vegan mayo before and I always get so curious to try, but never find any. The sandwich looks really good by the way.

[ Smiles ] You are quite fortunate, because we do not have those products in Trinidad and Tobago.