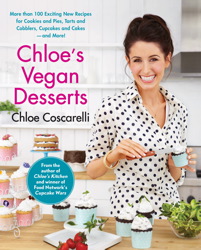 I just love Chloe Coscarelli! In case you're not familiar with Ms. Chloe, she was the first baker to win the Food Network's Cupcake Wars with a vegan cupcake. Talk about takin' it to the mainstream, right?

Last year, I reviewed her first cookbook, Chloe's Kitchen, which was filled with, not only yummy vegan baked goods, but delicious savory dishes, many of which paid homage to Chloe's Italian roots. Well, now Chloe has released an all-dessert cookbook, aptly named Chloe's Vegan Desserts.

It's a gorgeous, full-color tome filled with cupcakes (including her Cupcake War-winning Chocolate Orange Cupcakes with Candied Orange Peel), layer cakes, cookies, pies, bars, cinnamon rolls, pudding, and ice cream. How Chloe can bake so much and still look so thin and smokin' hot is beyond me, but seeing her hotness on the cover makes me feel like I can eat any dessert and not gain a pound. Sure, it's a fallacy. But it's one I'm willing to give in to.

On that note, I tried several recipes from this book without a shred of food guilt. First, I made this Olive Oil Lemon Cake: 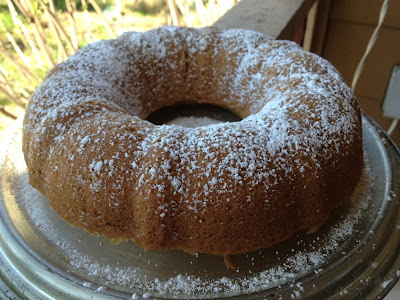 I mostly picked this recipe so I'd have an excuse to use my new bundt pan. But dude, I'm so glad I did. The was the most ridiculously moist, light lemon cake in the world. I brought it to a potluck, and it was devoured so fast that the host didn't even get a taste. Perhaps wrongly, I took two slices for myself before the host even fixed his plate. But hey, I baked the cake, and it was damn good (and he was taking his sweet time making his plate).

Next, I tried the PUPcakes! These are mini cupcakes for dogs! 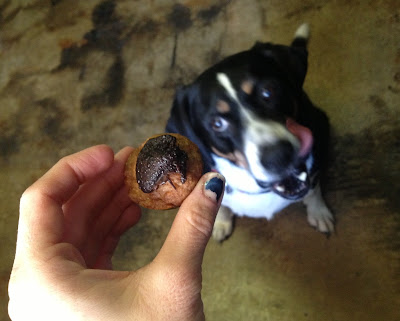 As you can see, Datsun was licking his lips just thinking about these. The basic, wheat flour-based, applesauce-sweetened cupcakes were topped with melted carob, so they were totally safe for dogs. My pups loved these. Datsun would swallow them whole, and Maynard (my pit bull) would spit his on the floor and carefully eat the cake first. Then he'd lick the carob off the floor. He's a messy pup, but I can't blame him for wanting to savor each part.

I actually tried these too, and they were awesome. I was tempted to steal the whole batch for myself, but, perhaps feeling guilty for hogging the lemon cake, I decided to only have one of these and give the rest to my little guys.

This week, I made a batch of Chloe's Sugar Cookies in fun spring shapes: 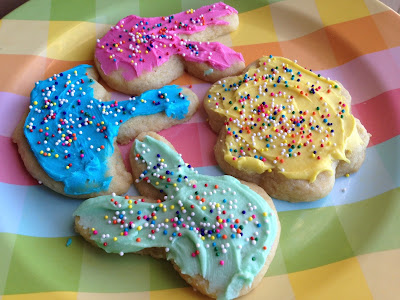 Those are bunnies, a flower, and an umbrella if you can't tell. My co-workers, who ate most of these on Tuesday, couldn't decide if the umbrella was really a basket or a mushroom. Anyway, perfect sugar cookies. I like mine soft and not at all crunchy. These were melt-in-your-mouth soft and buttery without a hint of overcooked crunchiness.

I have a ton more recipes bookmarked to try from this book later. The Double Crust Fudge Bars (shortbread crust with coconut-chocolate topping) are at the top of that list, followed by Pumpkin Cinnamon Rolls with Maple Glaze, Baked Chocolate Doughnuts, Mocha Mud Pie, and Chocolate Beer Cupcakes with Irish Whiskey Buttercream.
Posted by Bianca at 10:27 PM

Mmm I want to go to there.

I haven't had a sugar cookie in ages, those look amazing!

I LOVE Chloe and her recipes! My copy of this book is an early review copy, so black and white with internal page reference numbers left blank. None of that matters, though, because the glory of these recipes shines through brightly! I have so many recipes flagged. The first I made was the lemon poppyseed muffins/cupcakes.

Everything sounds so delicious! I love the fact that there's even recipes for dogs to enjoy! :)

I've been really curious about Chloe's Vegan Desserts. That lemon cake in particular may have convinced me.

Chloe's recipes always look amazing! her dessert book seems to be no exception! The cookies came out so cute and the pupcakes are adorable too! I'll have to check the book out for sure! :)

I made the fleur de sel cupcakes and they were awesome!

There is noticeably a bundle to learn about this. I assume you made certain good points in features also.

The snowball cookies are amazing too! I get to recipe test for her and she really perfects every single recipe. I always say I have no idea how she makes so few ingredients make such good food.