Another random meal round-up! I've been eating lots of the same things lately, so I haven't had many exciting meals to blog out. But one very exciting thing that I ate this week was Trader Joe's Cauliflower Gnocchi with Simple Truth Vegan Alfredo Sauce! 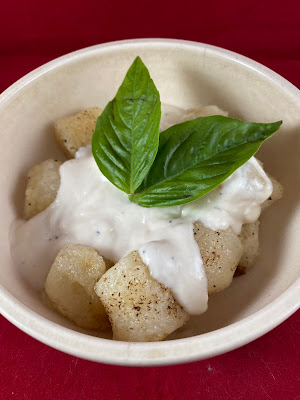 I picked up these frozen TJ's gnocchi a couple months ago, and they've just been chilling in my freezer. But after I discovered the awesome Simple Truth alfredo (the best I've ever had!), I knew they needed to be paired with that sauce. These little puffs were so tasty. They had the texture of potato-y gnocchi with the flavor of cauliflower. I'm guessing they're low-carb (no idea!), but they were soooo gooood.

Here's a very un-sexy meal of a Big Ass Salad and Avocado Toast. This was a "throw in every veggie in the fridge" salad that had a balsamic dressing, some nooch, and chickpeas. Plus, a probiotic pickle (I'm trying to eat something fermented every day!). It was just okay. But the avocado toast was super-yummy. I'm reading The Blue Zones right now and hoping to learn some tips to live to 100! 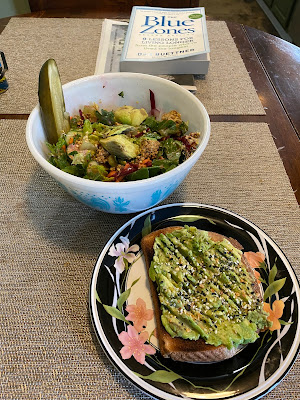 And finally, here's yet another Vegan Omelet made with Nabati Plant Eggz and Nabati Cheddar Shreds (which I reviewed in this post earlier this week). The omelet was stuffed with bell peppers, onions, and spinach, and I served Roasted Sweet Potatoes on the side. 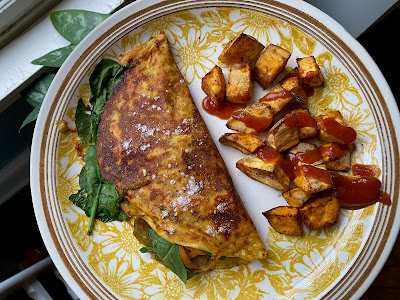 The kale gnocchi is really good too!