As I mentioned in yesterday's post, I've tapering for my 50K this week (it's Saturday!), so that means I've been doing a lot less running and a lot more breakfasting. On Tuesdays, I usually run and then have a smoothie for breakfast. But this Tuesday, I slept in and had a big meal of Breakfast Nachos! I made tofu scramble with bell pepper and onions, seasoned with my signature scramble mix (onion powder, garlic powder, nooch, oregano, Bragg's, turmeric, celery salt, and black salt — it's in Cookin' Crunk!). 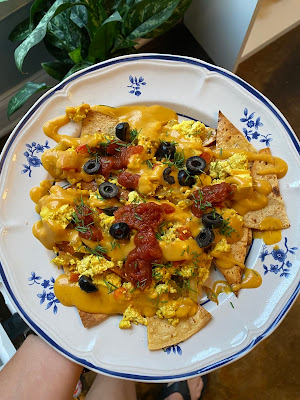 I air-fried some corn tortilla wedges until they were crunchy, and then I topped them with scramble and some leftover potato-carrot cheese (from The Plant-Based Athlete). Plus, chives and black olives. Scrumptious!

I'm using a free taper nutrition plan that I downloaded from Another Mother Runner, and it included a recipe for Classic Minestrone. The recipe called for chicken sausage, but of course I subbed vegan sausage. I've been enjoying this every day for lunch this week with a vegan grilled cheese. 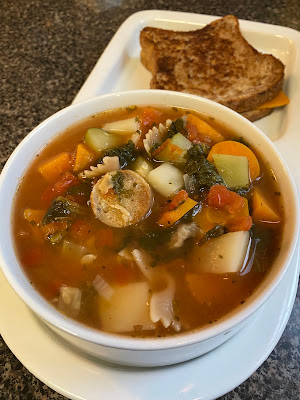 I also had planned to show you the awesome goulash I made last night, but I forgot to take a picture! I never do that! Luckily, I've got lots of leftovers, so I'll snap one later this week.

Bianca good luck on your race! I hope you have great weather on Saturday.

Good luck with the race!

Best of luck with the race! I'm rooting for you!