I subscribe to VegNews' Deal of the Week emails, where they sent out hot deals on new vegan products. And a couple weeks ago, they sent one for Nabati Plant Eggz and Cheeze Shreds. You could get two bottles of vegan eggs and packages of cheddar style and mozzarella style shreds for $15. Considering that you'd pay way more for two bottles of Just Egg and two packs of Daiya, I figured that was, indeed, a hot deal! So I ordered some! 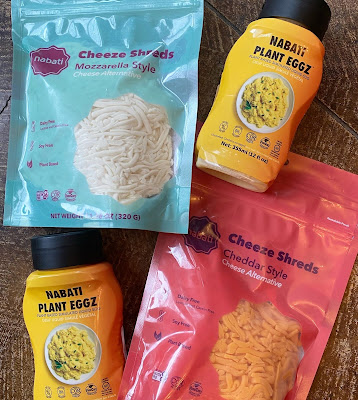 The Plant Eggz and shreds arrived last week, packed in a cooler box with lots of reusable ice bricks (I saved those for our coolers and lunch boxes). I finally got a chance to try the eggz and cheese in a couple of ways. First, I made a Plant Eggz Omelet with bell pepper, onions, spinach, and Nabati cheddar-style cheeze shreds. I had toast with homemade muscadine jam and some Fry's Family Foods breakfast links on the side. 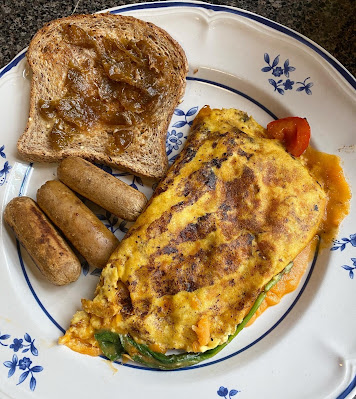 The egg mix is liquid, much like Just Egg, but it's a quite a bit thicker. To make an omelet, I had to thin out the mix with some water before pouring it into the hot skillet. But it cooked up very much like Just Eggs does. It was a little more delicate, so flipping wasn't super-easy (hence my weirdly shaped omelet). The shreds were super melty, so they worked great for this!

As for taste, it honestly tasted very much like Just Egg. Plant Eggz are made with lupin protein concentrate, and Just Egg is made with mung bean concentrate. I'm not sure what the difference is, but they're both legumes. I'd say Just Egg is still my favorite, but this is just about as good. The cheeze shreds are made with coconut oil, tapioca starch, and carragenan, and they are very melty, but flavor-wise, they're just okay. Not bad. But I much prefer Daiya for shreds. I know there are some Daiya haters out there, but Daiya makes my favorite shred.

A couple days later, I made some Scrambled Cheeze Eggz using the Plant Eggz and Nabati cheddar shreds. The Eggz scrambled up much better than they worked in an omelet, so I'd recommend that. But just like Just Egg, a serving size doesn't make much eggs. Luckily, I had plenty of air-fried red potatoes and toast on the side for a hearty meal. 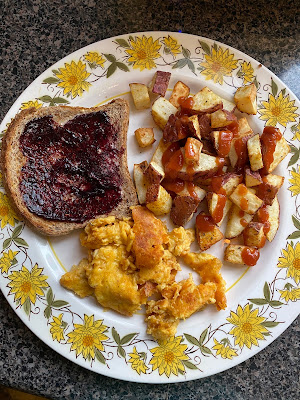 Nabati is a Canadian company, and I haven't seen their products in stores around Memphis yet. But you can order them from their website. They're good, and I love seeing more options hit the shelves. But Just Egg and Daiya still have my heart!

I ordered some too, but haven't gotten mine yet. I'm excited to try it!

That sounds like a very good deal. I love getting to try new products at a discount so I can know if I like them or not.