Mabon (aka the Autumn Equinox) was Wednesday, and for the first time in forever, I'm actually excited about fall! Summer is my favorite season and always will be, but every year, I try really hard to get excited about fall. But every year, I can't help but feel like it's just the prelude to winter. In the South, we have about five months of summer temps and about one month of fall temps before winter hits us. And I really hate the cold! Granted, our "cold" here doesn't often get below 40 degrees, but anything less than 75 is freezing, in my opinion.

Anyway, enough about the weather! I'm actually excited for fall because it means pumpkin spice everything, my birthday (Oct 16!), Halloween (the best!), and Thanksgiving (the absolute best!). Yesterday, on the first day of fall, the temps here fell down to the mid-70s, and the air had that crisp feeling that means fall has arrived. It was kind of magical! It rarely feels like fall here on the first day!

For breakfast, I made Pumpkin Pancakes with Vegan Butter Syrup and Cranberry Compote from the Llewelyn Sabbats Almanac. Served with vegan Gardein sausage. 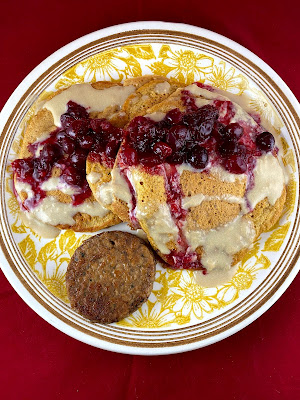 The recipe wasn't vegan, but I veganized it! The pancakes were easy to veganize by subbing extra baking powder for the eggs. But the syrup recipe called for evaporated milk with butter and sugar. I googled "vegan evaporated milk" and found instructions for making it from scratch with soymilk. Basically, you just reduce soymilk by half on low heat. Easy enough! After the milk reduces, you stir in vegan butter and sugar. It makes a nice creamy, buttery topping. The cranberry compote was just cranberries cooked down with sugar and maple.

I also made some Apple Pie Trail Mix from the Llewelyn book. This was a tasty morning treat at my desk. It has dried apples, cranberries (subbed for raisins in the recipe), pecans, walnuts, cinnamon, and vegan white chocolate chips. 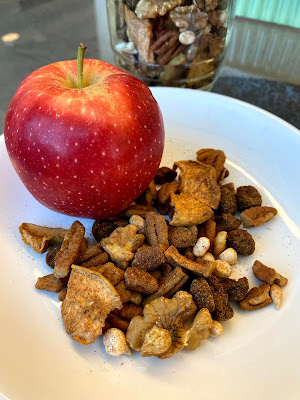 Dinner was a simple and delicious meal of Roasted Delicata Squash & Sweet Potatoes mixed with kale, homemade seitan, toasted pepitas, and an apple cider vinegar-olive oil dressing, served with a side of hearty barley. The squash and sweet potatoes were locally grown and came in my CSA. 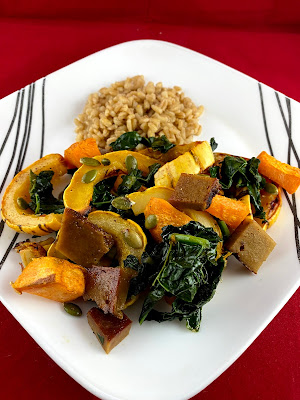 What gorgeous fall food! That evaporated milk recipe sounds like a keeper. I am loving the squash this year and trying to eat as much as possible while it is in season.

What a perfect welcome to Autumn!

Fall is my favorite time of year, and of course October is the best month (fellow Libras, unite!). Your Mabon meals look delicious. I did not make anything special but made sure to get outside and enjoy the lovely weather.

Yay! I'm glad you're embracing fall! I love everything fall-ish as well, even though we really don't get fall weather down here. If Memphis isn't warm enough for you, consider moving to South Florida! We rarely get cold, even in the winter.