Last week, while menu planning, I asked Paul what sorts of dishes he'd like me to make for the coming weeks. He's been eating vegan meals with me most nights — a new thing, since before he tended to come home from work and heat up some frozen pizza or canned Spaghetti-Os. But he's started having health issues lately, and poor diet is definitely to blame. So I convinced him to eat more vegan meals. He's not all the way vegan by any means, but he's definitely eating more fiber now.

One meal he requested was goulash. I'd had it before, but it'd be a looooong time, and I'm pretty sure I'd never tried a vegan version. So I googled and found this recipe for Vegan Goulash (American-style). It was super-easy to make and has lots of vegan grounds (I used the Simple Truth brand) cooked with bell peppers, tomatoes, and onions. I used a gluten-free pasta for this because Paul prefers white pasta over whole wheat, but I wanted to use something a little healthier. This pasta was made with brown rice flour. 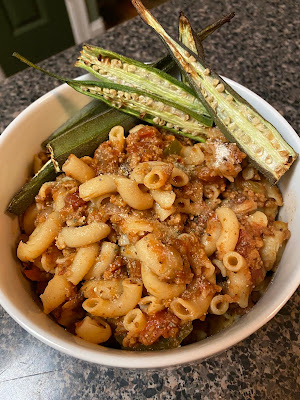 This was really good! I will definitely make it again! I would probably just go with a whole wheat pasta (or maybe even a chickpea pasta) next time because the gf pasta was a little soft. But still very good. And the recipe made a ton! On the side, I roasted some okra in the air-fryer, my new favorite way to eat okra.

Here's a quick meal from lunch today. This is mostly all from a bag. I'd purchased some TastyBite Coconut Squash Dal and TastyBite Brown Rice bags for our camping trip, but I never ate them while we were camping. So I heated that up in the microwave while I sauteed the last of some spinach that was about to go bad. Not toon shabby for a microwave meal! 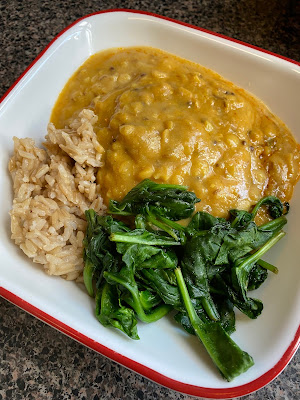 Tomorrow, I'll blog about this weekend's awesome 50K race! I didn't have time to write a full race recap tonight, but I've got lots of fun pics to share. Spoiler: The race went great!!

So glad to hear the rave went great! Looking forward to your race update post.

Yay to Paul for trying your delicious vegan meals! He's lucky to have you.
CAN'T WAIT for your race recap!!!!! So exciting!