A few weeks ago, a traveling vegan pop-up made a stop at Memphis Made Brewing Co. Southern Fried Vegan is oddly based out of California, nowhere near the South, but I'm glad they were traveling down here! The food was SO GOOD. There was a line wrapped around the brewery for hours, waiting for their food. I think every vegan in Memphis showed up for this. Ha! They were doing plates for $20, and you got a main and four sides. Since that was a little pricy, Paul and I opted to split a plate, but it turned out to be more than enough food. Oh, and we got a side of tots with cheezy sauce. 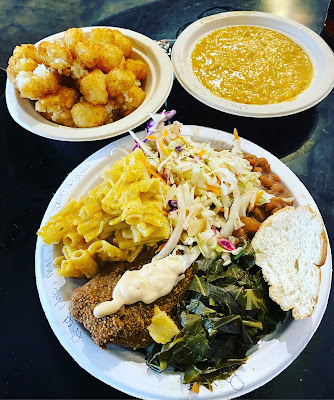 We went with vegan fried chicken, mac & cheese, greens, coleslaw, and baked beans. Paul and I took turns standing in the line (while the other person guarded our table inside the open-air brewery). Paul ended up being the one who was in line when it was time to order, so he arrived at our table carrying our plate of food plus tots and cheeze, which I wasn't expecting! He said just tots sounded good, and I will always agree with that. He got the cheeze on the side because he thinks he doesn't like vegan cheeze. More for me! The meal was amazing, and the fried chicken was our favorite part. We were wishing we had two pieces to share instead of having to halve one, but we had plenty of food.

We had leftover cheezy sauce, so I took the rest home and used it to make some Vegan Mac & Cheese the next day. I used Barilla red lentil protein pasta and some broccoli for good measure. The cheezy sauce seemed to be made with melted vegan cheese, so it was oily and indulgent. Really yummy! 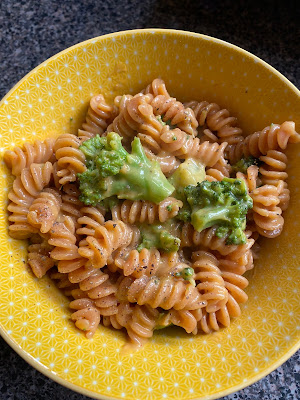 I treated myself to a Just Egg Omelet on a Sunday morning forever ago! I have such a backlog of photos to post! Just Egg can be a little tricky to flip, but it tastes just like chicken eggs, and I felt very special eating this. It was stuffed with wild mushrooms from Bluff City Fungi, spinach, and vegan cheese. 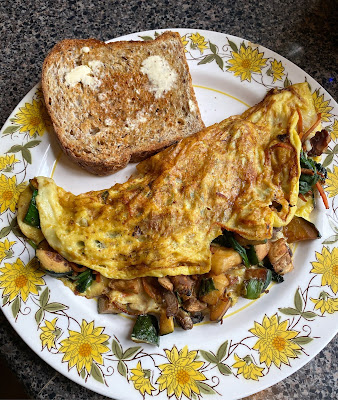 Here are some recent healthy weekday breakfasts. I made the Pumpkin Pie OMmeal from Eat Feel Fresh. This is just rolled oats with pumpkin puree and pumpkin spice, plus lots of coconut milk. Topped with dates and pumpkin seeds. Tis the season! 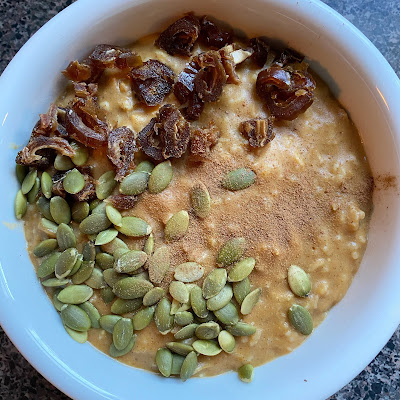 And here's a really fun new way for me to get my morning protein powder in! I made the Sweet Potato N'oatmeal from Eat Feel Fresh, an alternative to protein oats. These mashed sweet potatoes have Complement Protein, pumpkin spice, and coconut milk. Topped with cashew butter, maple, and pumpkin seeds. Will be making this again! 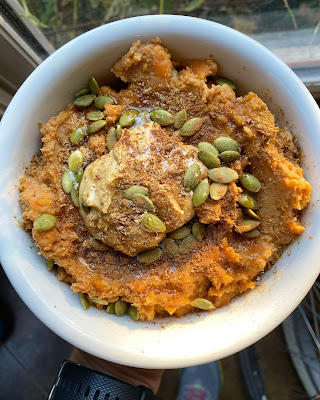 OMG, that southern plate looks incredible!! I love plates with a little bit of it all!

That plate from Southern Fried Vegan looks like everything I love! Good call on Paul's part to get tots too. They are always welcome. Southern Fried Vegan came through Des Moines a while back too, but it was too far of a drive for me. I heard lots of good things, though!