As I mentioned in a post a couple weeks ago, Paul bought a small pull-behind camper recently! First, we tried camping in our backyard to test it out. That was super-great because my house and bathroom and pets were all right there! Last weekend, however, we decided to take it a little further out and camp at a site that's (kind of) in our hometown. We went to the Memphis KOA!

I should clarify here that the Memphis KOA is actually not in Memphis but rather in West Memphis, Arkansas — about 15 minutes from downtown Memphis. We live in Midtown Memphis, which is about 20 minutes from the campsite, so this was a fun test run to see how we would haul it with Paul's car. But I was still able to run home and check on the pets a few times.

We got there Saturday afternoon and set up our site. This was our first time at a KOA, and I was a little surprised at how close together all the RVs are. Not like "too close for COVID" but just too close for privacy. We like to play our music, but we didn't want to annoy our neighbors. 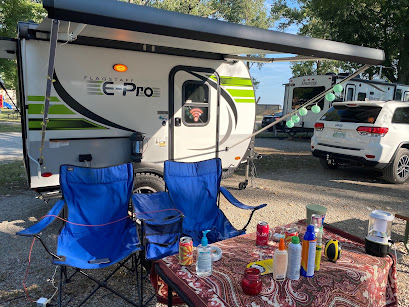 Once we got set up, I got to work on dinner! We brought stuff to cook Spaghetti with Mushrooms and Vegan Beef. 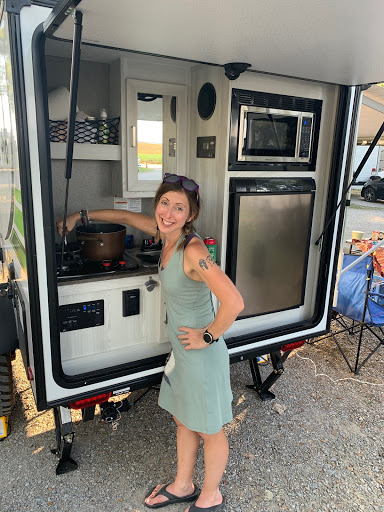 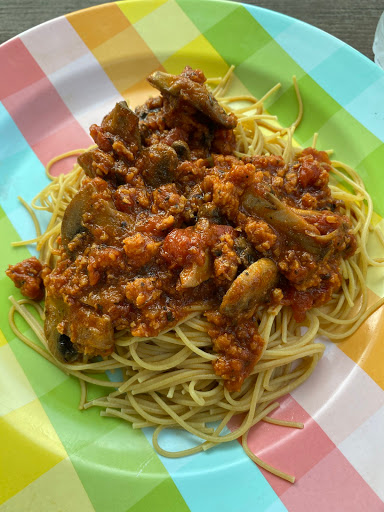 I have a few things to learn about camping and cooking! I somehow managed to mess up three pots in making this dish, which was a lot of dishes to wash in our teensy sink. Next time, it's one-pot pasta! But this was really good. We used Beyond Beef for the meaty part and a jarred sauce because that was easiest. 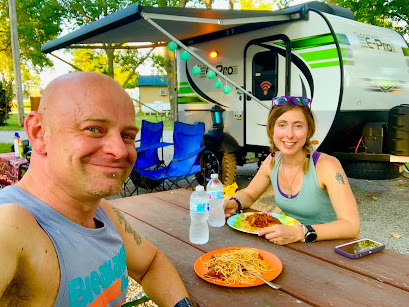 After dinner, we started a fire and, of course, I had to make Vegan S'mores again! It was soooo hot on Saturday with temps in the high 90s (even at night), so it was really too hot for a fire, but no way am I camping without s'mores. Also, the mosquitos were especially bad since the campsite is situated between Arkansas soybean and corn fields. But we still had a great time! 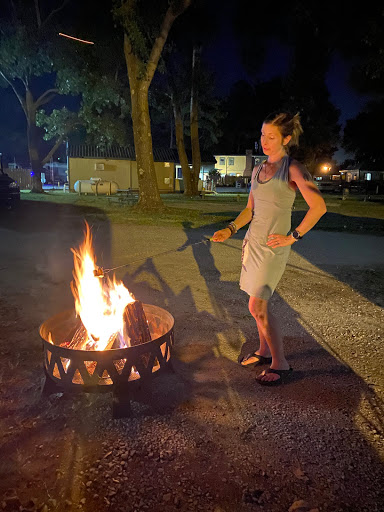 The next day, I woke up around 8 am and made some instant coffee and laid my yoga mat out by the fields for some morning flow. I got some funny looks from the other campers, but I don't care! 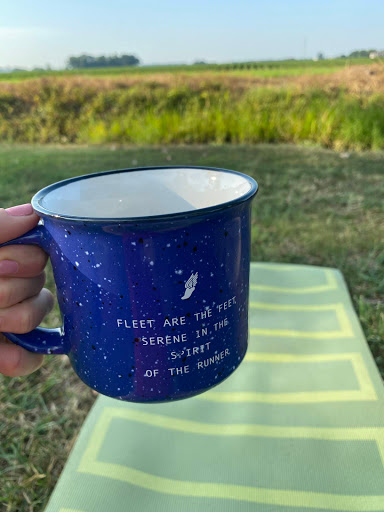 Then I borrowed Paul's car to run home and feed my pets. When I returned to the campsite, I made us some Vegan Pancakes and Gimme Lean Sausage. Pancakes are so easy to make while camping because you can just bring your dry ingredients in a jar and your wet in another jar and mix it up on-site. 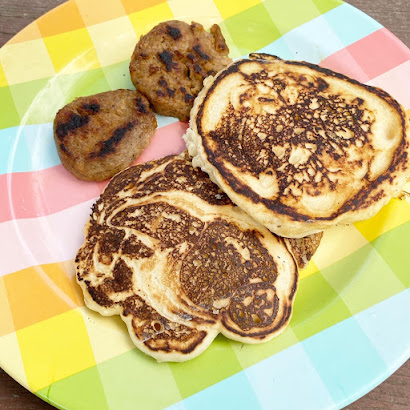 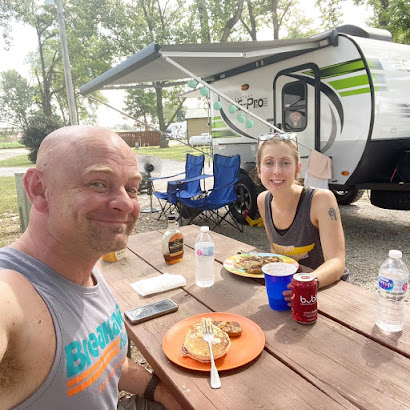 Then it was time to pack up and head home! This was a fun trip, and we can't wait to take the camper out more. If you're considering a KOA stay during COVID, I will say that this felt very safe. Masks are required inside their gift shop/general store, and the bathrooms were cleaned often. Sadly, the pool was closed (I assume because of COVID), but I really wanted to swim!
Posted by Bianca at 8:00 PM

I want every herpes patient to please read my testimony, my name is SARAH MORGAN and I am from California in the USA, I contracted genital herpes from my ex boyfriend who never had any symptoms. I have had it for 4 months now., and it has affected my life. I have told my boyfriends who I trusted about it and I have never had a bad reaction, it has affected my new relationships with Smith and people think herpes is really a minor skin irritation herpes has a long term effects on health. The stigma attached to this virus by ignorant people is ridiculous. Most people have herpes in one form or another. I would like to advise people on how I get rid of my herpes and I was reading a comment on the internet,and I saw a testimony posted by a woman from Germany that she get rid of her herpes with the help of DR AHKIGBE and so I was so happy when I saw that post, that his herbal medication is free and I quickly collected the herbal doctor email and I email him within 3 hr he respond to my email and I explain things to him he told me not to worry that he is going to cure me totally with his herbal medicine he only request for little money that he will use to buy the items for the preparation of the herbal medicine, wish I send to him because the pain was too much for me to bear and after some days he told me that he has prepare the herbal medicine, that I should send him my address that he want to sent it to me via DHL or FED-EX that was how I got the herbal medication and I use it as I was told and after few days I found out that my herpes was no more, i went to hospital for confirmation and it was true really that was how i got my cured. DR AKHIGBE also cure other deadly diseases like,  HIV/AIDS, HERPES, DIABETES,CANCER, ALS, ASTHMA, WEAK BODY,  HEPATITIS A&B, DENGUE FEVER, RABIES, MARBURG  DISEASE, THYROID, ARTHRITIS, MENINGITIS ,LUPUS, EPILEPSY, CHRONIC DISEASE, DICK AND BREAST ENLARGEMENT, MALARIA, BACTERIAL DIARRHEA HEART DISEASE., JOINT PAIN, STOMACH PAIN,  DENGUE SCHIZOPHRENIA, POLIO,MULTIPLES SCLEROSIS, HIGH BLOOD PRESSURE, VAGINAL  DISCHARGE,  CHANCROID, TUBERCULOSIS, ALZHEIMER , PENIS ENLARGEMENT, PARKINSON'S, to get your rid kindly via his email:   drrealakhigbe@gmail.com    contact his number:  +2349010754824           website:  https://drrealakhigbe.weebly.com       you can still write me on Instagram to get more information. on Sarah Morgan 06.

What a fun little getaway! I love the cooking area at the end of the camper. That's smart that it's actually outside of it. A great way to keep it small, but include all of the essentials. It looks like you ate very well!