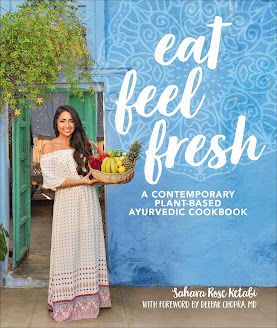 A few weeks ago, my best friend Sheridan suggested I check out Sahara Rose and her Highest Self Podcast. Sahara Rose is a plant-based, Ayurvedic nutritionist/author/podcaster/spiritual warrior princess! I wasn't familiar with her just a few weeks ago, and now I'm all in. She operates a goddess circle program, and she created a yoga/Ayurveda-based oracle deck (which I just got in the mail the other day). She's totally woo woo, and I'm here for it because I'm totally woo woo too! When I'm not obsessing over vegan food and running, I'm obsessing over crystals, Tarot, yoga, and magick.
I had actually read her book, Idiot's Guide: Ayurveda, a couple years ago, but I didn't pay attention to who the author was. I wish it had clicked for me back then, but either way, I'm glad Sheridan recommended I check her out. I immediately ordered Sahara Rose's Eat Feel Fresh cookbook, and I've been making so many dishes. Her book has inspired me to get back into Ayurveda, and I'm trying to eat for my vata-pitta dosha most of the time now. But I'm by no means doing this 100%! I like the 80/20 approach to everything — 80% in, 20% whatever.
A quick word about Ayurveda: It's a 5,000-year old-health system that originated in ancient India. It's the sister science of yoga. Yoga focuses on spiritual health, while Ayurveda covers the mind-body connection with nutrition and self-care practices. I won't go too deep into it in this post because there's a lot to explain. But there are three doshas (mind-body types), and I am a combination of two of those: Vata-Pitta. The other dosha is Kapha, and I have very little of that! You can find out your own dosha here.
Onto the food! Eat Feel Fresh is a plant-based, alkaline, gluten-free cookbook, so the recipes are super healthy and whole foods-based. There are breakfasts, six-taste bowls, chakra soups (one for balancing each chakra), dinners, and desserts. My favorite thing so far was this Durga Goddess Bowl from the six-taste bowl chapter. 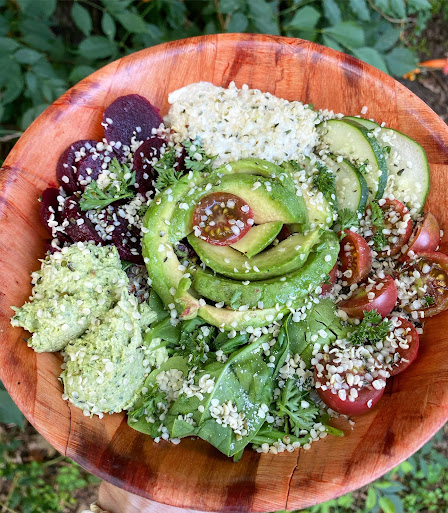 This salad-style grain bowl has quinoa, steamed beets, cucumber, tomato, steamed spinach, hemp seeds, avocado, edamame ginger hummus, and cashew tzatziki. The six-taste bowls are considered sattvic, meaning they contain all six tastes that help with digestion: sweet, salty, sour, bitter, pungent, and astringent. As a vata, I'm supposed to limit raw vegetables, favoring cooked veggies to help with digestion and other imbalances. But Sahara designed her six-taste bowls to be tridoshic, meaning they're balanced for all doshas. She includes special instructions for each dosha as they're preparing her dishes (for example: I was supposed to steam my spinach, while I pure pitta or kapha would eat it raw).
Another fave were the Sweet Potato Toasts. She has different toppings depending on your dosha, but the savory vata version has avocado, tahini, sea salt, and lemon. Vatas need more fat than other doshas, so yay!! Lots of avocado! The "toasts" are partially baked sweet potato slices that are toasted in the toaster before serving. 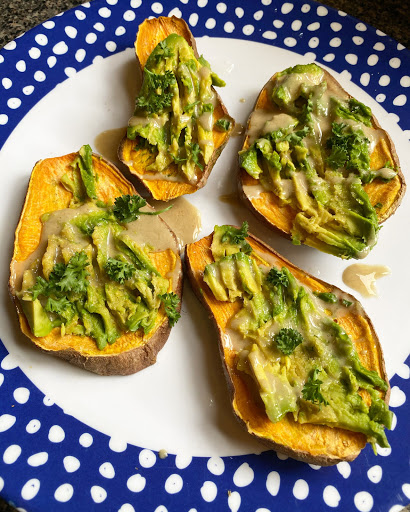 There's also a sweet version of the sweet potato toasts for each dosha. The vata version has almond butter, banana, cinnamon, and goji berries. These were tasty! But the savory version was my fave. 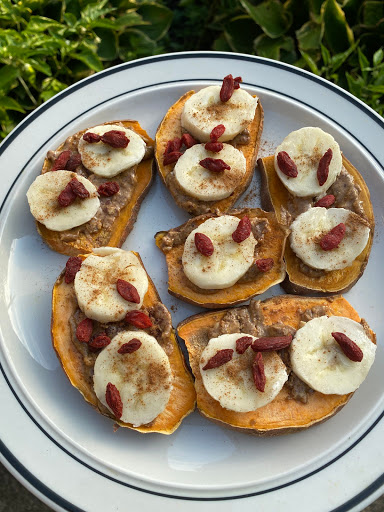 I've been really working through the breakfast chapter! I also made her Savory Warming Carrot Oatmeal (also for vata). Vatas are supposed to limit cold foods since we tend to be cold-natured (I'm always freezing), and this warming bowl of oats was comforting even in the hot summer. The oats have spinach and carrot mixed in, and they're topped with avocado. 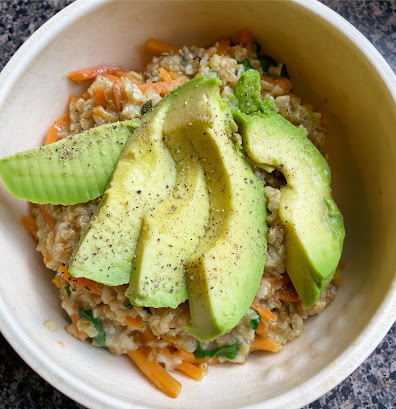 I also tried two of her smoothie bowls. I made the Autumn Leaf Smoothie Bowl for vatas. This was a very fall-inspired smoothie bowl, which was a little weird to have in the summer, but I had leftover pumpkin that needed to be used. It has lots of warming spices and a fun spirulina swirl! I'll definitely be making this again when the weather cools down. By the way, Ayurveda doesn't recommend smoothies because they say you should avoid cold foods to aid in digestion, but Sahara's updated version says smoothies are fine so long as you don't use frozen fruits. This bowl didn't have any frozen fruits. 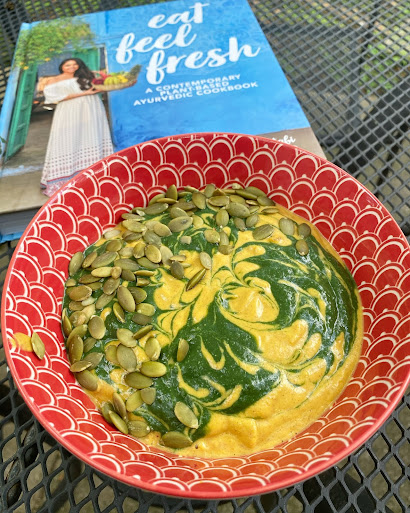 I also tried the Summer Sun Smoothie Bowl for pittas. I am vata-pitta, meaning I have a vata body and a pitta mind. I'm thin with frail bones (haha, I've broken my foot four times!), but I have a fiery, go-getter, routine-driven mind. After taking Sahara's quiz, I saw that the breakdown for me was pretty even — 75% vata body and 75% pitta mind. So I feel like I should probably occasionally gravitate toward pitta recipes too. This smoothie bowl with banana, strawberries, chia, cilantro (!!!), and green tea was lighter and cooler, both qualities that help balance pitta. By the way, this was made with fresh banana and strawberries rather than frozen. I'm not completely on the room-temp smoothie bandwagon yet, but I could get used to it. 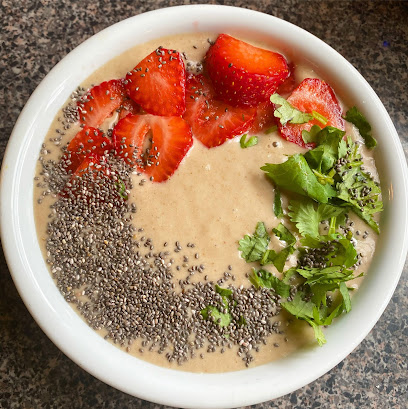 As you can see, I've mostly just delved into the breakfast chapter so far. But I'm planning to make her Sweet Potato Pesto Pizza later this week, and I've got my eye on some other dinner recipes, like the Yellow Dal Tadka, Palak Tofu, and Tempeh Tikka. The recipes lean heavily Indian because that's Sahara Rose's cultural background, but there are also non-Indian dishes, like Sweet Potato Chickpea Burgers, Cauliflower Casserole, and a Fajita Bowl.
I can't wait to dig into this book some more. You'll certainly be seeing more photos from the book soon! I want to make everything!
Posted by Bianca at 8:00 PM

I've seen you posting about this book on Instagram and everything looks so beautiful and tasty. I tried doing the dosha quiz but there were so many questions that I didn't even have a 'closest' answer to!

The autumn leaf smoothie bowl is gorgeous!!!
I swear one of these days I'm going to try savory oats!!

I ordered the book after I saw your Instagram post and I love it so far. I have always been interested in Ayurveda but now I'm going to try to really implement it in my daily diet. I put on weight during quarantine (too much bread making and baking) and now I'm trying to get back on track. I am Vata Kapha so the struggle with weight is real.