I've decided I want to make everything from Eat Feel Fresh, the Ayurvedic cookbook by Sahara Rose. And I feel like I'm well on my way there! I've made so many things! Last Thursday, I made her Tempeh Tikka with Plant-Based Pink Raita and Mint Cilantro Chutney. For the tikka, you marinate tempeh and veggies in a vindaloo yogurt sauce before grilling. The pink raita (yogurt sauce) is made with beets and cashews, and the chutney is loaded with herbs. I love things with dipping sauces! 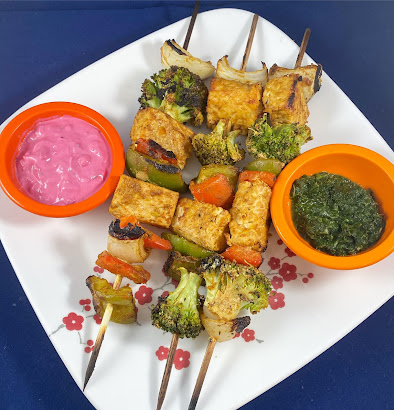 Last night, I made the Golden Milk Butter Cups from Eat Feel Fresh! These are stuffed with golden milk-spiced coconut butter, and they're so good! 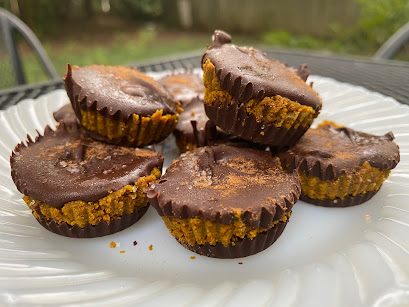 I wanted them to be on the healthier side, so I bought the Lilly's stevia-sweetened dark chocolate. It's pricy, but fair trade, so I felt okay about it. Then on my first try, I accidentally got water in the chocolate as I was melting it, so it seized up and became unusable. I wanted to cry!! When I have baking fails, I get so upset, and I can't sleep until the mistake is fixed. I knew I had to try again, which meant buying more expensive chocolate. I ran back to Kroger and bought another bag of Lilly's. And this time, I was VERY careful not to get water in the chocolate. Success! Still mad that I spent all that money, but at least I have lil' chocolates now.

After my weekend in Nashville, I needed to detox with some green juice, so I made the Alkalizing Green Juice from Eat Feel Fresh. This has celery, cucumber, lemon, ginger, turmeric, and coconut water. Juicing isn't recommended for vata types (like me), but they say, if vatas are going to juice, they should add some spice, like ginger and turmeric. Okay by me! 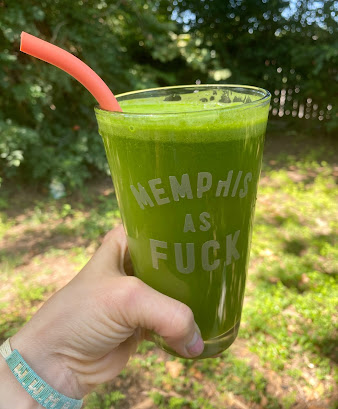 And finally, here's a meal that isn't from Eat Feel Fresh. This is the Cowboy One-Pot Pasta from The Abundance Diet by Somer McCowan. I did her Abundance Diet as a January reset one year and made almost every recipe in the book, including this one. I remembered really liking this easy pasta dish with zucchini, tomatoes, and white beans, so I made it again for Macaroni Monday. I used Banza cavatappi pasta, which is gluten-free, loaded with protein, and really great! I learned about this on My Cat Loves Daiya and then found some on sale at Kroger. Score!

I am in love with that beautiful pink raita!

I love the glass your green drink is in :)