My partner Paul's brother Donnie and his partner Jackie are involved with a family brewery business in Pennsylvania called Sobel's Obscure Brewery. Jackie's father, along with herself and her brother Gordon, lauched SOB (as its nicknamed) in 2012. Though we can't buy the brew down here in Memphis (craft beers tend to be regional), Jackie and Donnie brought some down over the holidays and asked if I could create a few vegan recipes with them.

I love cooking with beer! It adds such a complex flavor to recipes. Of course, the dish that comes to mind immediately is beer chili. Beer adds a nutty, malty flavor that complements to spiciness of the chili pepper and the heartiness of the beans.

I used the SOB Prehistoric Pilsner in this Vegan Beer Chili (recipe below!). 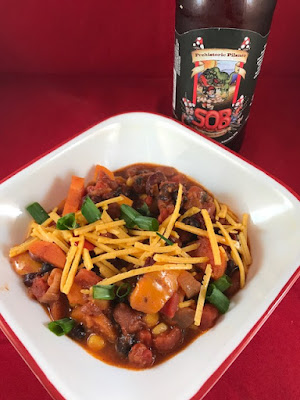 It's a light-bodied ale with just a little hint of citrus. There's a slight hops flavor that's balanced and not at all overwhelming. I prefer easy-drinking beers like this in a chili rather than something hoppy like an IPA. If you can't get SOB brew in your area, any great pilsner will work for this recipe. But if you're in the Pennsylvania region (here's the store locator), you should definitely try it! I'll be creating another recipe using their IPA soon. Stay tuned!

By the way, Donnie creates the art for the labels. There's a different beer gnome on each varietal. This is Badgertail. 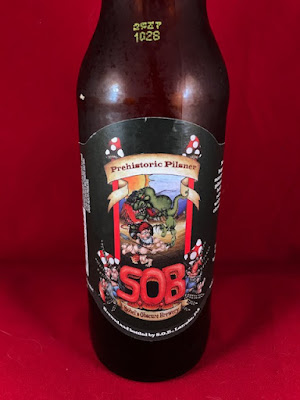 Heat the oil in a stock pot. Add the onion and saute 3-5 minutes or until soft. Add the garlic and saute another minute.

Add the carrot, bell pepper, and hot pepper, and saute another 5-7 minutes or until veggies start to soften. Add the corn, tomatoes (and the juice), beans, beer, tomato paste, and spices. Bring to a boil. Cover and simmer for 30 minutes.

Serve with vegan cheddar, vegan sour cream, tortilla chips, cornbread, crackers, or whatever you fancy on your chili! Also makes great filling for burritos and topping for nachos and fries.
Posted by Bianca at 9:00 PM

I haven't cooked with beer in awhile, but you're right it does add such great flavor! The chili looks delicious!

Oooh that sounds amazing and I love the artwork on the bottle!

beer and chili = the perfect combo!