The Month of Nailing Breakfast!

I just realized I haven't even told y'all about my commitment to the No Meat Athlete 2018 Monthly Challenges. I'm following this 12-month plan for self-improvement where each month, you take on a different challenge.

January was simply — Define Your Year. You basically pick a theme or area of focus for your year. I'm declaring 2018 the Year of Trail Running, since I'm hoping to run a 50K trail race in the fall. And I've been getting in some short trail races this winter with the Memphis Track Runners Club Winter Off-Road Series.

February's challenge is Nailing Breakfast. I'm already pretty good at breakfast if I do say so myself. I never, ever skip breakfast, and I try to eat wholesome meals to start my day most of the time. Every now and then, I'll sneak in a fake meat/fake cheese breakfast sammy, and I'm okay with that. But I really do want to get better at post-workout carb/fat/protein balance.

I've recently learned that it's best not to have much fat post-workout. Fat is great, but it's better enjoyed later in the day rather than right after a morning workout. Before, my post-workout breakfasts (which is pretty much every breakfast, except for on my one rest day) were usually pretty high in fat. So I'm working on that! Also, I've slacked a little on protein after non-run workouts, but I should be taking in protein after lifting and bootcamp classes too!

Here are a few examples of post-workout meals from the month so far. I enjoyed this meal of a Whole Wheat Bagel with Zucchini Spread, Tofu Scramble, and Berries after a bootcamp class. In the past, I would have just had the bagel with zucchini and berries, but I added the scramble for extra protein. Also, I used water to saute the veggies in the scramble to cut down on fat. 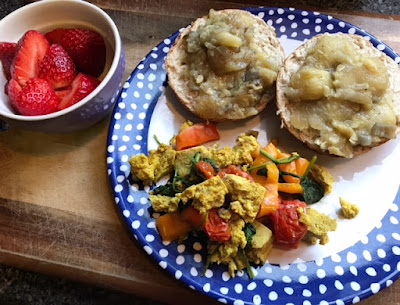 And here's a post-bootcamp Breakfast Sandwich. Instead of my usual Lightlife sausage and vegan cheddar, I used tofu (cooked in Vegg powder, that's the yellow stuff), spinach, and a tad bit of Lulu's Baked cultured vegan butter. Some fat is okay, but I used way less than I normally would have. 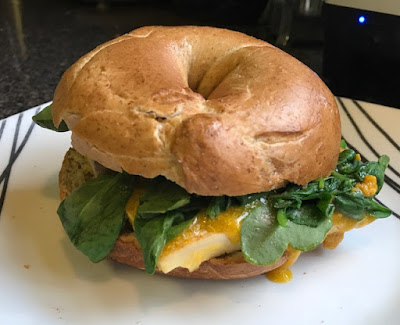 I'm still doing lots of post-workout smoothies, but I'm leaving out the nuts or nut butter that I would have often put in. Instead, I'm eating my nuts as a morning snack later in the day! Still getting them in, just not right after a workout. This Blueberry Cobbler Smoothie has blueberries, banana, oatmeal, spinach, and vanilla protein powder. 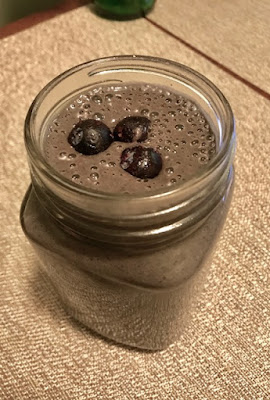 And of course, FitQuick protein waffles fit right into my healthy morning routine since they're high-protein, high-carb, and low-fat. Here's an Orange Cream Bar Waffle with Blueberry Maple Syrup and Hemp Hearts. Just a sprinkling of the hemp hearts so not much fat. 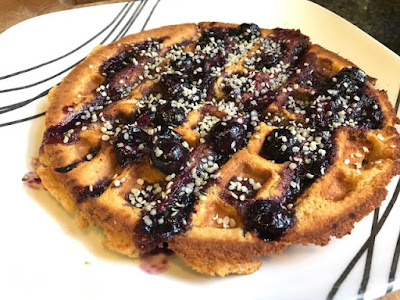 And finally, here's this morning's breakfast of Pizza Protein Waffle with Cauliflower Marinara & Nooch. Side of berries and plums. In the past, I always topped my pizza waffles with Daiya mozz, but nooch is a lower-fat option. Another thing: I'm trying to work fruit into every breakfast since I don't tend to eat fruit any other time of day. 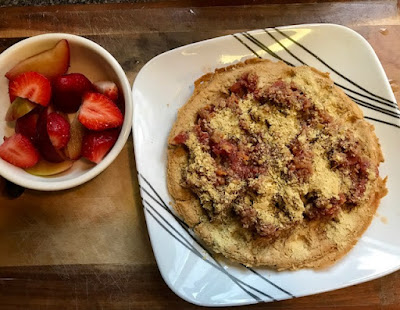 I haven't been perfect. I totally had a sugary, fatty, protein-less slice of king cake for breakfast on Tuesday, and my weekend breakfasts have certainly been more lax! But I'm just trying to nail breakfast as well as I can this month.

March is Daily Meditation (and I've already got a headstart on that since I've been meditating daily since December!). If you want to follow along with the No Meat Athlete Monthly Challenges, here's the link.
Posted by Bianca at 9:00 PM

I love the year long challenge! You will rock it, of course! And you definitely always nail breakfast. I could eat breakfast food all day every day and I love seeing what creative things you put together!

I always drool over your breakfast! You always nail breakfast, even when it is cake!

These all look good! I don't eat breakfast in the mornings- I tried the intermittent fasting on a lark, and I found it really improved my mental clarity (I get sleepy after eating, no matter what time of day it is) - But I LOVE breakfast foods for dinner!

Looks like some great breakfasts! I tend to have the same things, depending on if I am going to work or going to yoga, but I love mixing it up every now and then.

I'll be looking forward to more of your breakfast posts! That has always been the meal I struggle with...mostly because I'm not a morning person and I'm lazy! LOL