My friend Susan has long been threatening to host a pie party. And she finally did last weekend! This ladies-only party (because you've got to have a pie for pie party, get it?) was potluck, so we had lots and lots of pie, both savory and sweet. (UPDATE: Someone pointed out that the aforementioned "got to have pie" comment was un-trans-friendly. Didn't even think about that! But we definitely would have welcomed anyone who identified as female to our pie party!).

I brought the Classic Broccoli Quiche from Vegan Brunch. This tofu quiche is my go-to for an easy (and delicious) brunch, and my friend Pam (a guest at the party) loves quiche more than life itself. So I knew I had to bring this! I used a frozen, pre-made crust because ain't nobody got time to make a homemade crust. 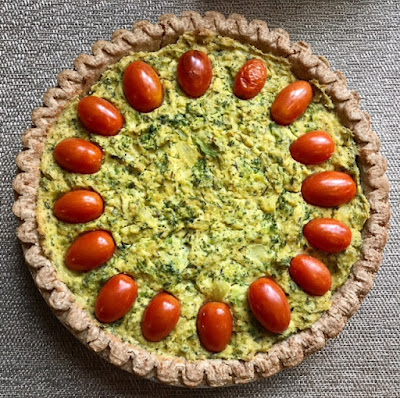 And for my sweet pie, I took it WAY back to 2008 with the Smlove Pie from the Veganomicon. I used to make this pie all the time when VCon was one of only a few books in my cookbook collection. Plus, this pie was pretty much an internet sensation in the vegan world back then. It's a chocolate mousse pie with peanut butter caramel, candied pecans, and chocolate ganache. Pre-made graham cracker crust to save time. 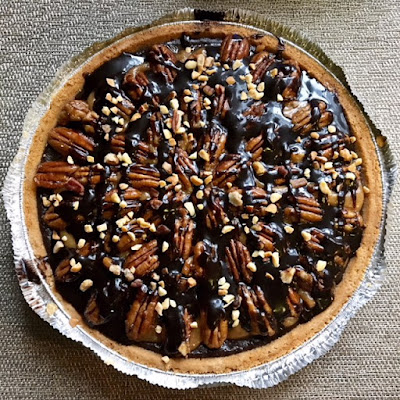 Susan made so many things! These little Potato Empanadas were cute and delicious, especially dipped in Susan's vegan ranch. 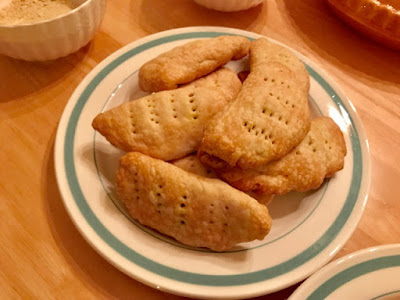 To save time, she bought a few pies — like this Daiya Pizza Pie. 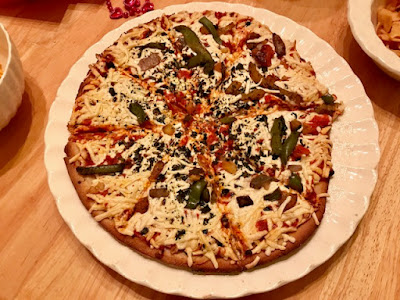 And these Amy's Vegetable Pot Pies. 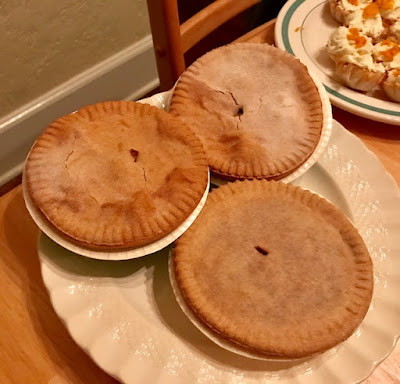 Sadly, I failed to get a picture of everyone's favorite pie — Frito Chili Pie! Susan had all the fixins to make this amazing mess-pile of Fritos, vegan cheddar, chili, and onions. As for sweets, Susan made these pillowy Apple Turnovers. 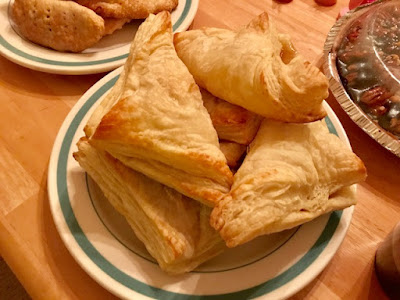 And she made some yummy Peanut Butter Pie with Chocolate Ganache. It may not have been the prettiest pie, but it was damn tasty with all that PB and chocolate! 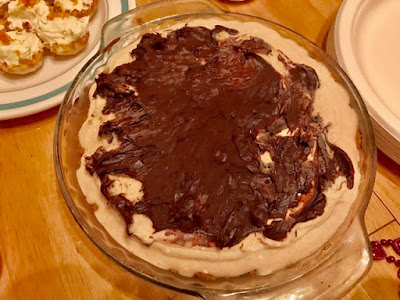 And finally, check out these adorable Orange Cream Tarts that Susan made in little phyllo cups. So cute! And creamy! Loved the little orange zest on top. 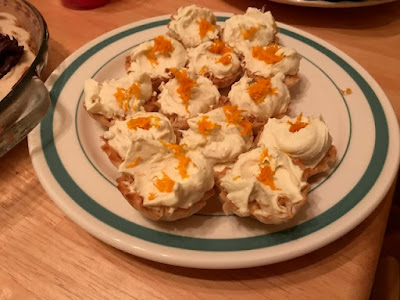 Pam D. (we had two Pams) made this Peanut Butter Banana Pie from The Chubby Vegetarian Cookbook. It's a frozen pie made with banana soft serve and drizzled with chocolate syrup. So good! 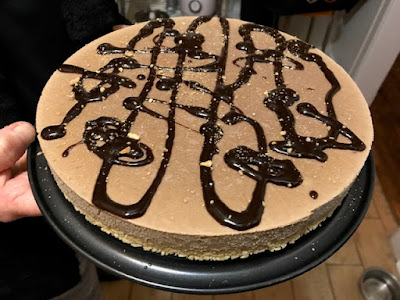 The other Pam — that would be Pam S (aka MY PAM) — woke up on Saturday morning to no power at her home due to a neighborhood outage. And it didn't come on until almost time for her to leave for the party, so she swung by the store and picked up two Marie Callender frozen pies (did you know most Marie C fruit pies are VEGAN???? YES!). She got this Strawberry Rhubarb Streusel Pie. 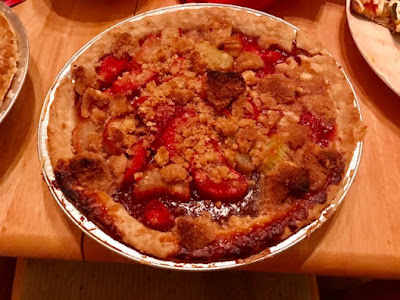 And this Peach Lattice Pie. We enjoyed both with So Delicous CocoWhip and almond milk ice cream. I'd heard about these pies being vegan but never tried them. Both were excellent and just as good as homemade in my opinion. I'll definitely be turning to these in a pinch in the future! 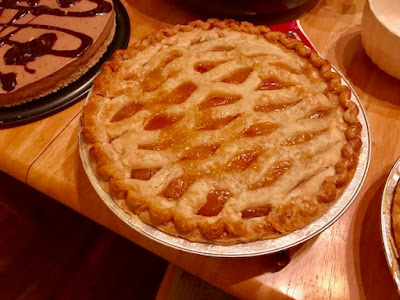 Here's the whole pie spread (look at my cute cherry pie holder — score from the Goodwill!). 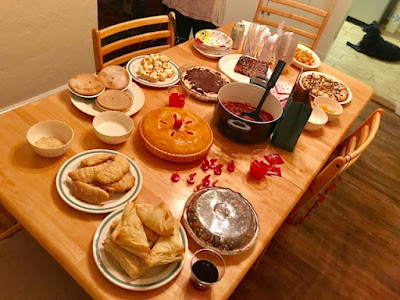 After we ate, we played this Pie Face game that's basically Russian roulette with pie. You put some vegan whipped cream (we used blobs of CocoWhip) on the hand and take turns clicking a wheel until the hand springs up someone gets pied in the face. It didn't work super well, but we managed to make a huge mess on Susan's coffee table. Here is Pam and Pam preparing to be pied. 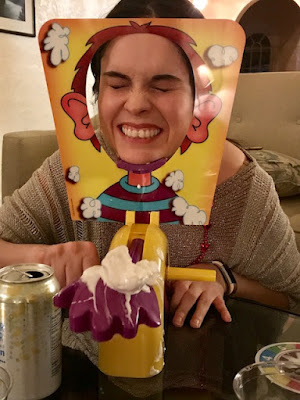 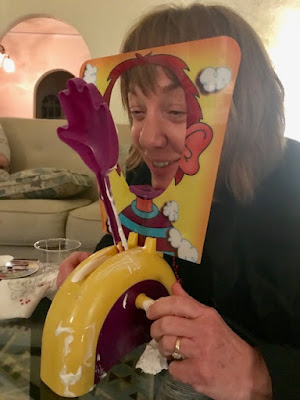 So many pies!! I want a piece of them all! This looks like such s fun and delicious night.

You had me at pie party! Everything looks amazing, I don't know how I'd choose! Looks like you had such a fun night, I love that you and your friends have all of these fun get togethers!

Love the idea of the party, love the idea for the post, HATE the implied "you're not female if you don't have a "pie"" feel that came off. I know you're an ally, but the comment came off as a little trans-unfriendly. Just throwing it out there.

These all look great BUT I'm completely sidetracked by the fact that most MC pies are vegan. That is a GREAT tip!

Sorry about Anonymous! Honestly hadn't even thought about it that way! Sometimes even allies have a thing or two to learn. We certainly would have welcomed anyone who identified as female.

1) you have the most awesome-est group of friends probably ever.
2) everyone everywhere should have a pie day party to celebrate what pie means to them (i am food focused and think fondly of my grandmother’s legendary homemade pies)
3) now i want pizza
4) your quiche and pie contributions look freaking gorgeous and sound totally delicious!!
Ttrockwood

I want to come to your pie party!
I am always so sad that I can't find pre-made vegan pie crusts here, I always have to make from scratch. And sometimes I just want to skip a step and get to pie faster.
I have never made the s'mlove pie, but I think I feel it on the horizon.