Ben & Jerry's has DONE IT AGAIN! They've released two new non-dairy flavors, and I was thrilled to be sent a couple pints for review!!

I've had a lot of vegan ice cream in my day, and let me tell ya — Ben & Jerry's makes the best. It's delightfully creamy, and it doesn't even try to masquerade as health food. Ice cream is a treat, and it should taste like one. Fat and calories be damned! Also, I just so happen to prefer chunky over creamy, so all the flavorful bits and bites in the B&J's ice creams delight me.

The new flavors blew me away! There's Cinnamon Buns and Peanut Butter Half-Baked. 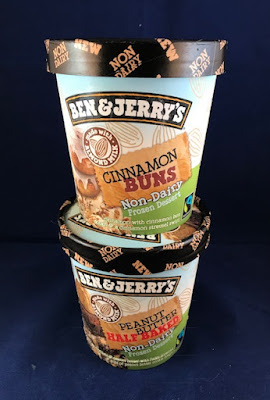 Out of the two, Cinnamon Buns is my fave since I'm always one to choose a vanilla base over a chocolate base. The ice cream is cinnamon flavored with chunks of cinnamon bun dough and a cinnamon streusel swirl. The bun dough is soft and sweet and chewy, and the streusel adds a bit more chunky sugar texture. This is like eating a cinnamon roll topped with ice cream. 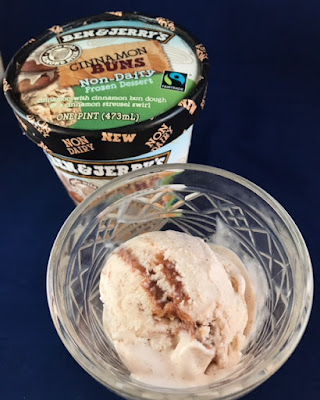 The Peanut Butter Half-Baked is great too though! And if you're a chocolate ice cream fan, you'll no doubt love this one the most. Chocolate and peanut butter ice creams are swirled together (!!!!) and mixed with fudge brownie chunks and gobs of peanut butter cookie dough. YES! Those PB cookie dough gobs are pretty special. I found three big ones in my bowl today, and I savored those bites for last. 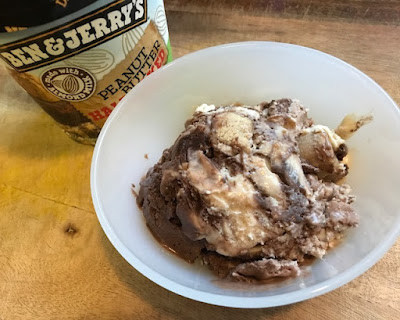 I can't recommend these flavors highly enough! Out of all the vegan B&J's flavors I've tried, Cinnamon Buns may be my very top fave (right after PB & Cookies!). That said, I still haven't gotten my hands on a couple of flavors — Coconut Seven Layer Bar and Caramel Almond Brittle. I've seen the coconut one in stores here but only ever when I've already got a freezer full of ice cream and can't justify buying more. And I've never seen Caramel Almond Brittle in Memphis, though I'm sure it's around here somewhere (probably at the East Memphis Ben & Jerry's scoop shop — they tend to have all the flavors).
Posted by Bianca at 9:00 PM

How do i get on the magic list for ben and jerry to send me ice cream?!??? How exciting they have even more vegan flavors! I love love love that they’re so successful with these! I can’t handle ice cream til it’s warm weather but these will be the first i scout out
Ttrockwood

The coconut seven layer bar is hands down my favorite, but I haven't been able to find these flavors yet!!!

These new flavours are on their way to Australia and I cannot wait! Originally I was most excited about PB half-baked, though I didn't really know what that meant, but because of peanut butter. But I think you have made me more excited about the cinnamon bun one! The snickerdoodle is my favourite So Delicious flavour, I love cinnamon. If only they could make a peanut butter cinnamon bun flavour!

The caramel almond brittle is crazy good! Definitely buy it if you can find it. I can’t wait to try the new flavors! 😋

I remember loving the cinnamon buns pre-vegan days. So I am excited about that!