Friday was Imbolc (also known as Candlemas) — the mid-way point between the winter solstice and the spring equinox. It also happens to be Groundhog Day — no coincidence!

As I've said on this blog many, many times before, I despise winter. HATE IT. I don't like the cold. Sure, snow is pretty for a day or so, but down South, we're lucky to get one good snow per season. I don't like the dead plants, the layers, the coats. I'd much rather be in flip-flops, tees, and shorts. I'm happier with less clothing, thanks.

But winter is a fact of life, so I've no choice but to deal with it. That said, I count every day until spring, and when this mid-point comes at Imbolc, I know we're almost there. I never miss a chance to celebrate Imbolc. Traditionally, it's celebrated with dairy products since way back in the ancient times, fresh produce was scarce during winter yet the animals were still producing milk. But these days, we're smart enough to know that animal milk is meant for animal babies, not humans. So I celebrate Imbolc with non-dairy products.

This year, my main course was Baked Pumpkin Ziti with Caramelized Onions and Sage Crumb Topping from the Veganomicon. 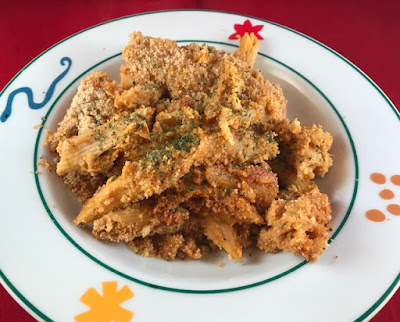 This has whole wheat penne pasta, cashew ricotta, pureed pumpkin, caramelized onions, and whole wheat breadcrumbs with dried sage. I picked out the recipe from my new copy of the revised VCon, which I won from the Cadry's Kitchen blog. YAY!! The new edition has color pics for many of the recipes, and each recipe is on one page — rather than the old format of flowing recipes in columns over several pages. It's been so fun and nostalgic to look through the new version. I was just a baby vegan when the first edition came out, and it was such an important book for me.

On the side, I had a Salad with Vegan Ranch — from Daiya. 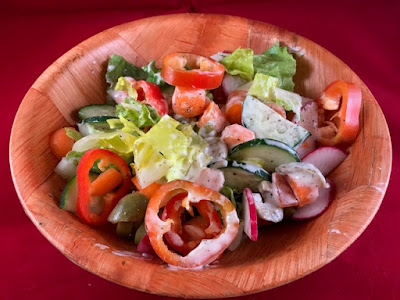 And for dessert, I had a Muddy's Bake Shop vegan Vanilla Cupcake. The white frosting symbolized snow for me and served as a reminder that, while spring is near, I should brace for a few more cold days. 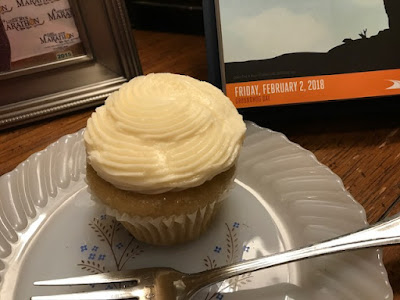 Happy Almost Spring! And Happy SuperBowl Day! Paul and I are getting ready for the game (AKA the JUSTIN TIMBERLAKE CONCERT) now, and I'll be back with a review post tomorrow for a new cookbook that I'm using for my game night recipes.
Posted by Bianca at 3:57 PM

Honestly haven’t heard of Imbolc before but i’m glad to know we’re getting closer to spring...! Looks like a really delicious meal to celebrate, I wouldn’t have thought to add pumpkin and bread crumbs to the pasta but it sounds fantastic.
I love that daiya ranch!! I just found their yogurt yesterday and tried the plain - it’s a great texture and definitely one of the best nondairy yogurts i have tried
Ttrockwood

Can i be vegan and use my outdoor deep fryers? I really want to eat healthy!