The Impossible Burger Comes to Memphis!

We finally have the Impossible Burger in Memphis! And I had a chance to try it out Friday night. The Liquor Store — a hip, diner/cocktail bar located in an old converted liquor store in the Broad Avenue Arts District — recently added the Impossible Burger to their menu! It's not a totally vegan restaurant, but they're super-vegan friendly, and I could not be happier that they're serving this burger. 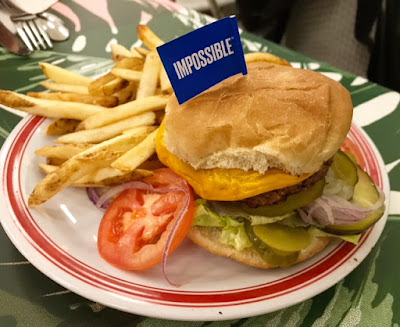 This burger was EVERYTHING it's cracked up to be. It seriously tasted just like the beef burgers I remember, even more on-point than the Beyond Meat Beyond Burger (which I also love). The patty is thinner, and the Liquor Store cooks it up diner-style so it's pressed flat and cooked all the way through.

This burger contains heme, an iron-containing molecule found in plants and animals, and that's what's responsible for the red, bloody burger look when the Impossible Burger is prepared rare. But the Liquor Store serves them well-done. I'd still love to try a rare version, but honestly, when I did eat meat as a kid, I always preferred everything to be well-done and a bit crispy on the outside. The Liquor Store's preparation captures that perfectly!

It's served on a vegan bun with vegan cheddar (pretty sure it's Daiya) with thinly sliced dill pickles and red onions, iceberg, and tomato slices. On the side is a generous portion of fries. The only thing that could have made this meal any more magical would have been a vegan vanilla milkshake. But they don't have those, so I had a Crowd Control IPA instead.

I've blogged about the Liquor Store before (you can read that here) and their amazing Cuban Platter with black beans, yellow rice, and perfectly crisp plantain chips. Love that they have options!

And they even have vegan dessert! They keep fresh desserts on the bar counter, and I spotted this last Vegan Danish and had to have it. It was just lightly sweet with a raspberry jam and slivered almonds. I took this to go and enjoyed it before my Saturday morning bootcamp class at the gym. 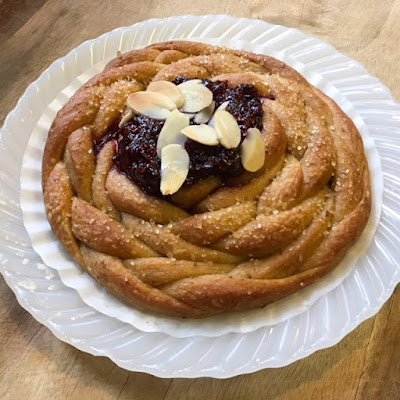 I keep seeing posts about the Impossible burger showing up places all around and I think it's such great news because obviously there is a demand for it!!
I don't really have an interest in the Beyond or Impossible burger myself, but it's exciting news for people and animals!!

Glad you finally got to try it! I've never had it rare either, so I have yet to see that "red" aspect...

I guess the Impossible Burger is finally branching out! It was just in California and NYC for awhile. I live near NYC, but I haven't gone in a long time for a simple visit.