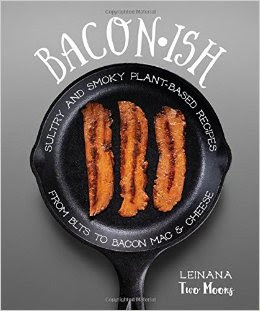 This might be a bold statement to make in May, but I'm just going to declare Baconish by Leinana Two Moons the Best Vegan Cookbook of 2016. I made that same declaration last year in April for Kittee Berns' Teff Love, and guess what book VegNews later named the Cookbook of Year? Yep, Teff Love. So you know, my record on these things is pretty good.

Baconish, as you might have guessed, is all about vegan bacon. The book's subtitle — Sultry and Smoky Plant-Based Recipes From BLTs to Bacon Mac & Cheese — pretty much sums it up. The book is packed with recipes, from breakfasts to soups to sides to mains to desserts, that use vegan bacon.

And not some pre-packaged vegan bacon. Nope! Leinana has a whole chapter on homemade bacons to use in other recipes throughout the book. There's tofu bacon, tempeh bacon, eggplant bacon, king trumpet mushroom bacon, coconut bacon, chickpea bacon — am I starting to sound like Forrest Gump? I made Seitan Bacon for a recipe, and it made way more than I needed for that one recipe, so I've been enjoying slices with my cereal and oats! For this recipe, you make a slab of seitan, coat it in smoky-maple-pepper marinade, and bake it in the oven. Then, you slice it into thin bacon strips. It has an amazing flavor — far better than any storebought vegan bacon I've ever had. 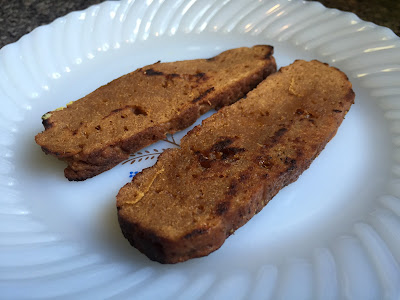 I made that seitan bacon to stuff inside the Eggless McMuffins from the breakfast chapter. I'm a sucker for a good breakfast sandwich. For the egg, you dip tofu in a spice mix laced with nooch and black salt and fry it up. That's stacked on an English muffin with seitan bacon, vegan mayo, vegan cheese, and spinach. I used Follow Your Heart Pepper Jack cheese and Chipotle Just Mayo for a spicy twist! 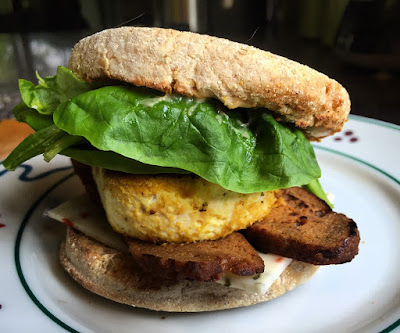 I also used some of that seitan bacon in this White Bean & Bacon Soup. It's loaded with chopped seitan bacon, white beans, carrots, celery, and smoked paprika. It's also topped with Carrot Bacon from the book! CARROT BACON, Y'ALL! You can seriously make bacon out of anything. This soup was really special, and it hit the spot this week since temps have dropped back down into the 60s (after several solid weeks of temps in the high 80s). 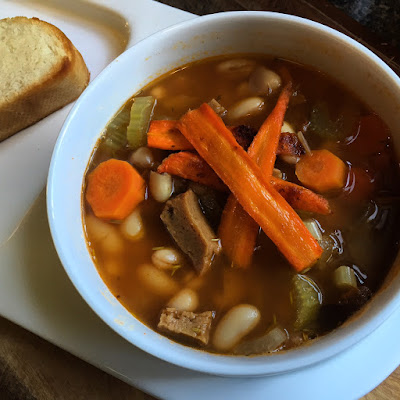 I also made the Tempeh Bacon from the book, but it was for a recipe, and I failed to photograph the bacon by itself. But you know what tempeh looks like, right? Anyway, I used said bacon, which by the way was the best tempeh bacon I've ever had (even better than my own tempeh bacon in Cookin' Crunk!), in this Apple, Bacon, and Cheddar Grilled Cheese from the sandwich chapter. It's stuffed with green apple slices, tempeh bacon, and vegan cheddar. I had some Miyoko's Creamery Aged English Smoked Farmhouse that needed using, so I used that in this recipe. And wow! So sophisticated and fancy. The sharp cheddar and sweet apple and smoky bacon paired so well together. 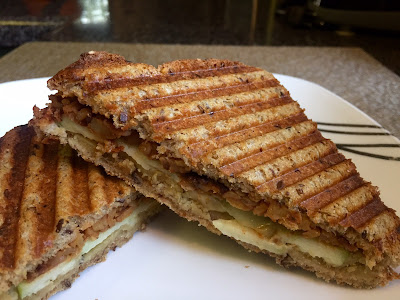 All of the above recipes, even the homemade seitan bacon, came together really quickly. And most of the recipes in Baconish would fall into the quick and easy category, but there is at least one recipe in the book that's pretty labor-intensive. And of course I decided to make that one — Potato, Bacon, and Onion Pierogies!!!! 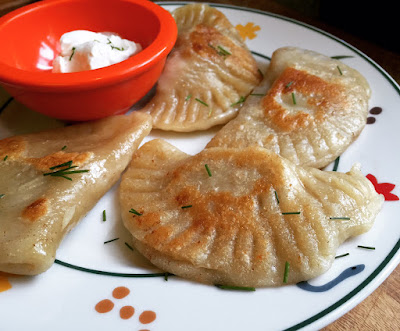 These soft, pan-fried dumplings are stuffed with mashed potatoes that are flecked with Leinana's Baconish Bits (TVP bacon bits), vegan cheddar, and onions, and they're served with vegan sour cream and chives. I used to love pierogies in my cheese-eating days, and I've yet to find pre-packaged vegan pierogies anywhere. So it's been years since I've had one! These were so, so, so amazing. I can't even express to you just how delicious they were. They took about two hours to make, but it was worth every second. Plus, the recipe made about 36 pierogies, and I've been eating four in a serving (with sides of quinoa and kale), so I froze a bunch to last forever.

The dough actually called for aquafaba (the revolutionary bean liquid that magically turns into eggs), making this the first mention of aquafaba I've seen in a cookbook yet. I really believe it made a huge difference in the dough. It was so light and chewy!

Also, bonus: The recipe made about 3 1/2 cups of bacon-cheddar potatoes, and since each pierogi is stuffed with just a teaspoon of filling, I had about 2 1/2 cups of potatoes leftover. And they're delicious, so I'm stoked about having an extra stash for side dishes throughout the week.

Oh hey, here's an inside shot. 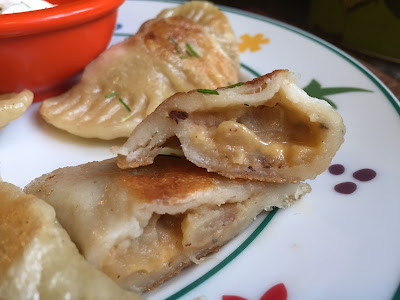 I made quite a bit from the book, but honestly, there are so many more recipes I want to try — Bacon Pancake Dippers (these are pancakes with strips of tempeh bacon cooked in the middle!!!), Black Bean BBQ Bacon Cheeseburgers, BLT Hot Dogs with Bacon Remoulade, Bacon Fried Rice, Tofu Bacon Carbonara, and of course, Smoky Bacon Mac & Cheese. There's even dessert — Maple Bacon Doughnuts, Chocolate Peanut Bacon Truffles, Maple Pecan Sundaes with Coconut Bacon.

Yea, I know you're drooling now. Go get this book. Seriously. Because vegan bacon makes everything better.
Posted by Bianca at 9:27 PM

Wow, what a review! That's high praise comparing its heights to those of Teff Love. I have a copy of Baconish in my cookbook cupboard. I need to break into it pronto! I'm dying to make those pierogies. Like you, I really miss having easy access to them.

I've only found one type of vegan pierogies, and they're hard to find. Your pierogies look seriously beautiful and delicious! They look professionally made! I am definitely drooling now, great review!

I am really looking forward to getting this book. :)

I am not a huge bacon fan but I still like salty crunch bits in my food. I like the idea of the carrot bacon, which is probably all the reason I need to buy this book.

Wow, this all looks so delicious! I need to try these recipes!!

We have vegan pierogies in cincinnati, ohio. I feel really lucky. They're made by a local lady who has it as an option and we sell them in 6 packs at the vegan grocery/restaurant I work at. Kraut ones and potato and daiya chz. But no vegan bacon ones. :)