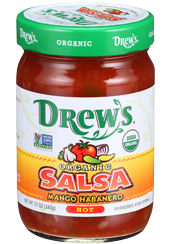 It's Cinco de Mayo — the holiday celebrating the Mexican army's 1862 victory at the Battle of Puebla (not Mexican independence, as so many people believe). For some reason, that's a much bigger deal in the U.S. than it is in Mexico. I'm guessing that's got a little something to do with Americans just wanting an excuse to drink margaritas at noon and eat tacos all day.

Guilty. I'm down with any day that promotes tacos and margs. My family and I actually started Cinco de Mayo a day early (Cuatro de Mayo?) with my mama's birthday dinner at a Mexican restaurant in their hometown. So I had vegetable fajitas last night. And then this morning, I made some cinnamon-cayenne-spiked Aztec chocolate protein ice cream for my post-run breakfast (but I'll wait and share that in an upcoming review post about Sunwarrior protein powder). Lunch was leftover vegetable fajitas from the restaurant. But dinner was extra special!

I made Mango-Habanero Chickpea Tacos! 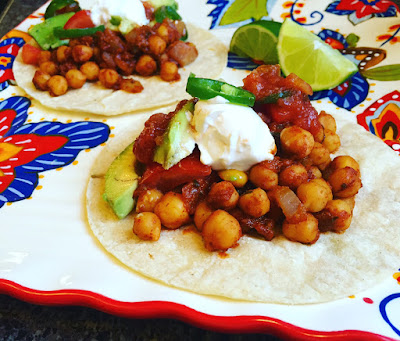 I'd originally planned to pick up some vegan fish tacos from Pink Diva Cupcakery, but Cassi had to close today because she left for a vacay in Florida this morning. And then I considered picking up some super-healthy raw vegan taco salad from the Raw Girls food truck, but they've started closing during the week (only open on weekends now). So, I decided to stop being lazy and make my own damn tacos.

I had some chickpeas in the freezer, a new jar of Drew's Mango-Habanero Salsa in the fridge, and some corn tortillas from forever ago. So I threw together these super-quick and delicious tacos. Here's the recipe!

Heat the 1/4th cup of water in a medium-sized skillet until it starts to bubble. Add the onions and saute for 2-3 minutes or until onions begin to soften. Add the garlic and saute one more minute.

Add the chickpeas. If the water has completely dried up, add a couple more tablespoons of water. You'll want to keep the skillet pretty wet until the very end of cooking time, so add water as needed.

Stir in the salsa, nutritional yeast, soy sauce, chili powder, smoked paprika, and epazote. Heat for about five minutes, stirring often, until all liquid is absorbed. You don't want the liquid to dissolve too quickly, so if it does begin to dry out before at least five minutes, add a couple more splashes of water. In the end, the chickpeas should be well-coated and thick but not dried out and not too saucy.

While the chickpeas are cooking, heat the corn tortillas for a few seconds on each side in a dry skillet until tortillas are soft and pliable.

To serve, spoon a little chickpea mixture into each taco. Top with tomato, avocado, fresh jalapeno, vegan sour cream, and extra Mango-Habanero Salsa. I like to add extra hot sauce because I find the Drew's Mango-Habanero Salsa to be fairly mild for my tastes. But I like things hot, hot, hot!

Serve with homemade margaritas! I'm gonna go have one right now!
Posted by Bianca at 8:28 PM

ha! yes, I'd like to think that most everyone celebrating today knows what they are celebrating? :)

mango and habanero is becoming a classic flavor combination for us - we love it! I need to get my hands on that salsa...

those look so so good. I love mango salsa.