Gosh, I remember way back when I first went vegan in 2004, I was learning about all these new (to me) foods — tahini, kale, tempeh, seitan, nooch, TVP, quinoa. Like so many people who'd never heard of quinoa, I thought it was pronounced kwin-no-ah. It was one of those words I didn't dare speak aloud until I finally heard someone else pronounce it keen-wah.  Eventually, quinoa became one of my favorite grains. It's amazing the world of foods that opens up to you when you become vegan.

Of course, quinoa isn't just for vegans. The peoples of Peru, Bolivia, Ecuador, Colombia, and Chile have been eating this amazing protein-packed grain for centuries, but unfortunately, at the time I went vegan, quinoa hadn't yet made it into the Standard American Diet (at least not in the South). I'd say that quinoa has pretty much arrived these days. Everyone eats quinoa — vegans, vegetarians, ominivores, gluten-free folks (okay, well, maybe not paleos, but they're missing out!).

Quinoa is so popular now that Pereg Gourmet Natural Foods has released a line of flavored boxed quinoa mixes. Think Rice-a-Roni but for quinoa and way healthier! The quinoa is pre-rinsed, so if you're a quinoa-rinser (I'm totally too lazy for that and never rinse my quinoa), that's one less step you need to worry about. Pereg sent me a few packages to review. 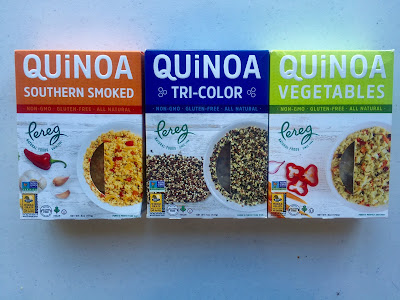 I tried the Quinoa Vegetables first. This packaged mix contains one bag of pre-rinsed quinoa mixed with spices and dehydrated veggies. You just simmer it on the stove for 15 to 20 minutes, and dinner is on the table. The vegetable mix had potatoes, carrots, onions, red bell pepper, currants, spices, salt, and mustard seeds. While the veggies were small and dehydrated in the package, I'll say that I was surprised by how many veggies were crammed in. Also, I really loved the sort of veggie broth flavor this dish had. 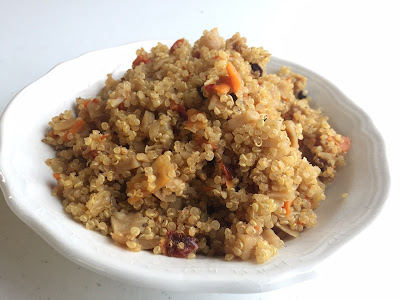 Of course the Quinoa Southern Smoked was my favorite. This one had a decisively smoky, bacon-y flavor, and while I can't be too sure because the ingredient list only says "spices," I'd guess that comes from smoked paprika. I served this with garlic steamed kale, and the two paired so well together. This one was also loaded with veggies — onions, carrots, tomatoes, and red bell pepper, garlic, and parsley. 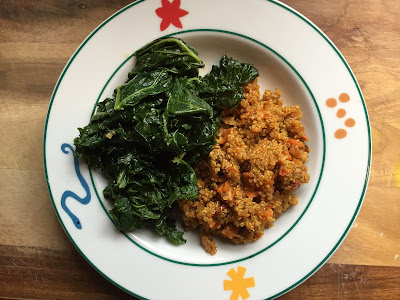 Pereg also sent me a plain Quinoa Tri-Color to try. This didn't have any seasoning or veggies, just white, red, and black grain quinoa. Each color has a slightly different texture (the darker quinoas don't get as soft), so the multi-color blend offered a variety in each bite. You might remember this picture from my review of Quorn's vegan products. I used the tri-color quinoa in a stir-fry with vegan Quorn and veggies. 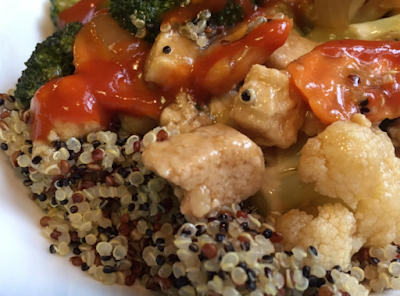 All of these flavors cook up in 25 minutes or less (depending on how high your heat is — mine took about 20 minutes). And the flavored packages are a nice change from plain ole white quinoa!
Posted by Bianca at 8:56 PM

I must admit I almost always buy tricolour quinoa if it is available, rather than the straight red or white packets, just because I think it looks pretty. ;)

I'm surprised they have mixes! I always rinse my quinoa before I eat it because of the saponin on top... do they pre-rinse it?

Hey Sophie! Yes, the ingredient list says "pre-rinsed quinoa." I should edit the post and add that. I never rinse quinoa because I'm lazy, but I know a lot of people do.