The Best Vegan Bacon Bits Ever!

I have a new favorite bacon bit! I'm kind of obsessed with bacon bits, and I'm a firm believer that a salad without them is just lettuce in a bowl. I've tried many a vegan bacon bit in my day — coconut bacon, whole grain bacon, Bac-O's (yes, they're vegan), chopped plant meat bacon, TVP bacon. And those are all delicious. But there's a new bit in town, and it's made from pinto beans. And it's my new fave! 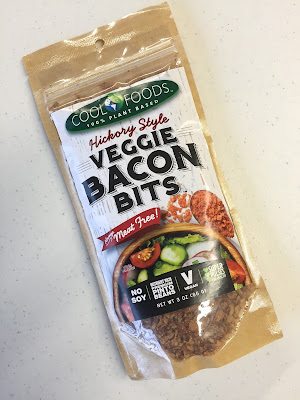 Cool Foods has come out with a line of bacon bits made from air-dried pinto bean pulses. They're gluten-free, gmo-free, and contain nothing artificial. In fact, the ingredient list is just pinto beans, sunflower oil, natural flavors, sea salt, and enzymes. They sent me a package to review, and I instantly fell in love. The bits are very crunchy, as a good bacon bit should be. And there's a slight pinto flavor that actually tastes more like real bacon than any other fakin' bacon I've tried.

They're so good that it's hard not to eat them straight from the package, but I had to have some on a salad to get the full effect. 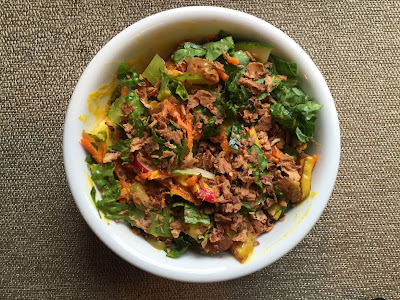 I also added some to my Annie's Vegan Shells & Creamy Sauce (the new Annie's vegan mac made with pumpkin and sweet potato). The mac was good on its own, but the bacon bits stepped it up a few more notches because that's just what bacon bits do. 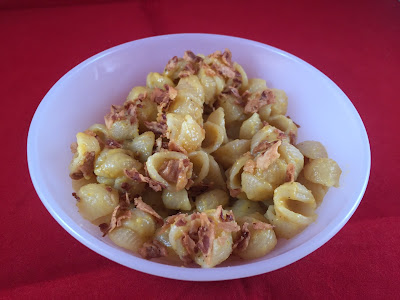 I love these bits so much that I've already ordered two more bags, and I'm not even out yet. I've found the Cool Foods website tends to be sold out of bacon bits quite often. I checked a couple weeks back, and they were sold out of every flavor. Today, when I ordered more, only one flavor (the Hickory Style) was available. By the way, these also come in Country Maple and Chili Pepper, but they seem to be sold out every time I check.

Hopefully, Cool Foods will be able to step up and produce more bacon bits to keep up with demand! These are just too good to be sold out all the time.
Posted by Bianca at 9:20 PM

Wow, that's high praise that these are your favorite bacon bits ever! I definitely need to get my hands on some. When Amey wrote about them the other day, I checked the website and they were sold-out. I just checked again, and they're sold out of all of the flavors. Amazon has them for sale; although, they're a couple dollars more expensive there. I might bite the bullet and go for it, though!

Looks like Amazon has the Hickory Smoke flavor available http://www.amazon.com/Veggie-Bacon-Bits-Hickory-Smoked/dp/B018CCLARE

I just saw these on Amey's blog as well. My favourite bacon bits so far have been the Wayfare ones... these sound like they would be even better! I hope I can try some when I visit the US next year.

Wayfare was my fave until these! Now Wayfare is my second fave, but it's a close second!

hey, you can have jump breaks on your blog posts, that way it will be easier to fit in other posts rather than scrolling down to see other posts.

This is such favorite blog looking too much option for food lovers, visit here.chowringhee satya niketan menu

Really i am impressed from this post....the person who created this post is a generous and knows how to keep the readers connected..thanks for sharing this with us found it informative and interesting. Looking forward for more updates..
vega one protein