If you've been reading my blog for awhile, you probably know by now that I brunch with my friends at Imagine Vegan Cafe almost every Sunday. Imagine has an amazing brunch menu, and their full (and HUGE) regular menu is available at brunch as well. But this morning, we had an unexpected change in plans. About 15 folks from the local vegan meetup group had planned a brunch gathering at Imagine this morning, so my little group of friends (there are typically four of us) pushed our usual brunch time back to give the meetup group time to order, eat, and free up some seats.

But when we arrived at Imagine at 12:30, the meetup group was still there, and there weren't enough open seats. So rather than wait, Megan suggested we go to Cafe Eclectic. I've eaten dinner at this hip Midtown cafe recently, but it'd been years since I'd had brunch there, and the menu has changed since then. Now they have Vegan Pancakes! 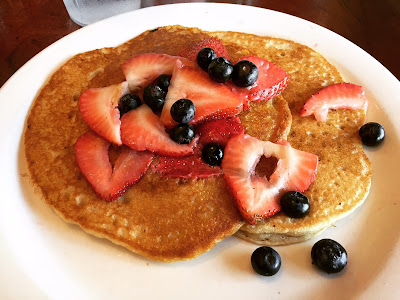 And they're good pancakes too. They're on the thin side, but they're fried in plenty of oil, so they get that slight crispiness on the edges while the center stays all soft and pillowy. I love that they come topped with fresh berries. One thing to note though: The menu clearly says "Vegan Pancakes," but under the description, they say they're served with housemade honey granola on top. And honey obviously isn't vegan, so I'm not sure why they would serve non-vegan granola on vegan pancakes. But that's an easy thing to leave off. We all ordered our pancakes sans granola.

Cafe Eclectic also has a build-your-own Tofu Scramble. You start with a tofu base for $3, and then for 75 cents each, you can add bell peppers, sauteed mushrooms, caramelized onions, red onion, tomato, jalapeños, spinach, avocado, jalapeño, or pico de gallo. I opted for mushrooms and avocado! 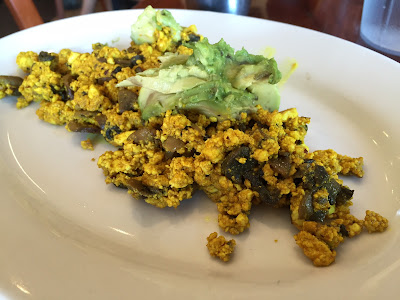 This was an awesome meal! And even though Imagine will always be our home base for brunch, it's nice to know that we can get a delicious vegan brunch at Cafe Eclectic too.
Posted by Bianca at 10:46 PM

It is good to know that there is another option for emergency change of plans!
I was at a smoothie place recently and they had a sign with a big deal about vegan ice cream in a smoothie but it had honey in it as well. Easy to sub out for maple, but still a bit silly!

I find it super weird when people call their menu item vegan something and it has honey. I guess people just don't get that honey isn't vegan! I'd totally have ordered the pancakes sans granola and a side of scramble too, yum!