On Saturday, I ran my third half-marathon, the inaugural Great American River Run, which trekked through downtown Memphis. And I got a PR! I finished 5 minutes and 41 seconds faster than my last best time, which was at the 2015 Little Rock Half. 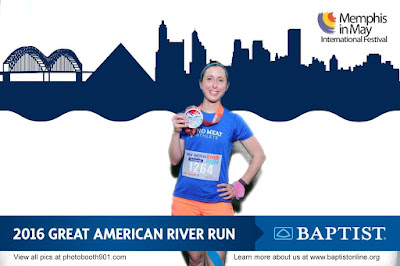 Some of that probably had to do with the fact that Memphis offers a flatter course than Little Rock (there were a couple of steep climbs - when we went up the Auction Street hill at mile 10, I was cursing the race organizers). It may also have to do with my recent efforts at training at a faster pace. Oh, and I totally got injured during the Little Rock Half (runner's knee), so not getting injured this time surely helped! But I'd also like to think that my performance is, in some part, due to my pre-race nutrition.

I follow a strict meal plan before half-marathons — one that's heavy in veggie-based and whole grain carbs rather than the traditional pasta-heavy pre-run diet. I got my meal plan ideas from an old vegan half-marathon post that used to be on a Vega website, but the last time I looked for it, the link was broken. Thankfully, I blogged about that plan here, so I have that as a reference point.

Tonight, I'll blog about what I ate all day Friday to fuel for Saturday morning's race. And tomorrow, I'll check in with a Saturday pre-run and post-run food recap! I think everything you eat the day before a race is super-important, so I stuck to my plan all day.

I did a short 30-minute shakeout run on Friday morning and followed that with a breakfast of a Whole Wheat English Muffin with Vegan Butter (from Miyoko's) and Earl Grey Apricot Jam and a Chocolate Protein Shake (Vega One Chocolate powder + So Delicious Chocolate Coconut Milk). The coconut oil-based vegan butter on the muffin provides sustained energy from fat, and the bread is complex carbs. And there's all kinds of good stuff in that protein smoothie — greens, fiber, calcium, potassium. 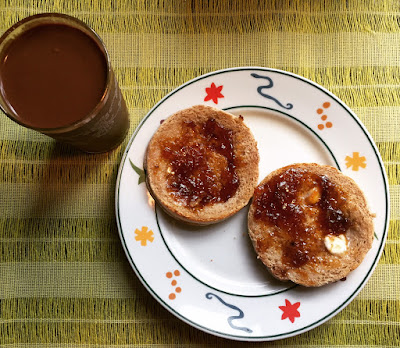 On the way to work, I stopped by Juice Bar for a Bunny Love Juice (carrots, apple, ginger, lemon). It's important to stay hydrated the day before a big race, and fresh juice provides hydration plus vitamins and minerals. And I needed that ginger to prevent inflammation in my knee. 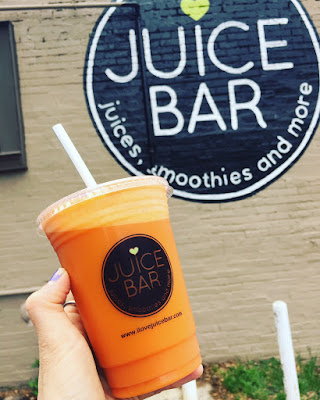 Speaking of anti-inflammatory foods, I whipped up this big ole Jolly Green Salad with Marinated Balsamic Tofu from The Super Tasty Anti-Inflammatory Kitchen e-book by Lacy and Melissa. The leafy greens (kale and romaine) have anti-inflammatory qualities, and this salad was loaded with good veggie-based carbs (celery, sprouts, snap peas, and cucumbers), plus hemp seeds, pumpkin seeds, the tastiest baked balsamic tofu, and some quinoa that I added to the recipe for extra carbs. If you're going to carbo-load, it's better to do so at lunch time so your body has time to digest everything. 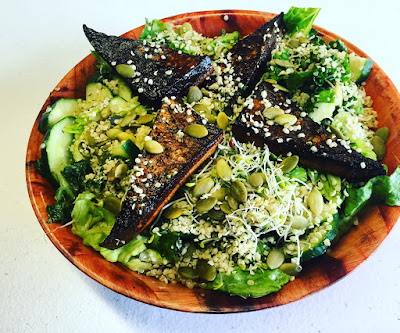 I typically always have yogurt and fruit as an afternoon snack the day before a race, just so I can get a healthy dose of probiotics and get everything moving (if you know what I mean). Nothing would be worse than being stopped up on race day! This time, I went with Strawberry Soy Yogurt and Fresh Strawberries. 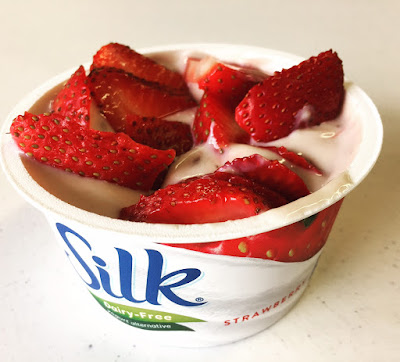 We had a big storm come through on Friday night, and it knocked out power at my house for a couple hours. I was totally panicking because I needed to cook my special pre-race dinner, and I was afraid the power would never come back on, and I wouldn't be able to charge my phone for the race (all of my music is in my phone). The power did come back on, just in time for bed. So my phone and wireless headphones got charged. But I ended up cooking dinner in the dark. Thankfully, I have a gas stove.

I whipped up this most awesome Italian Sausage, Brown Rice, Kale, Broccoli, and Tahini-Miso Bowl! I fried up a Tofurky sausage, steamed some kale and broccoli, boiled brown rice, and stirred together a sauce of tahini, miso, and nooch — all by lantern light! Had to snap this pic outside because it was still daylight out there. Carbs, protein, and veggies for the win! 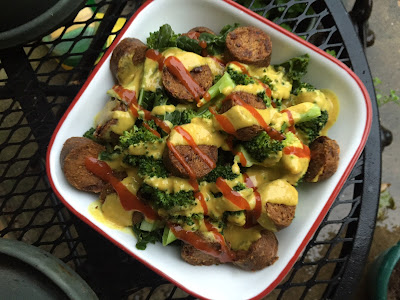 I have a pre-race tradition of having just one beer to calm the nerves and settle me into sleep. Too many beers would be a bad thing and probably lead to dehydration. But I think one beer before a race is good luck! I went with a locally brewed High Cotton Scottish Ale. 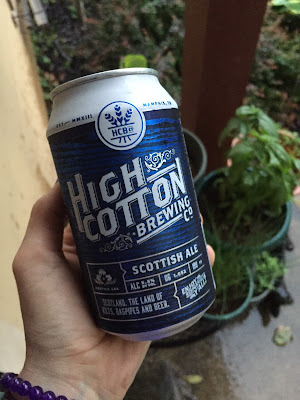 OMG! That sausage bowl looks SO good! I have been missing running and racing lately. That's awesome that you got a PR. I will stick to waddling my pregnant ass on the treadmill for now, but I'm going to get back on that pavement some day :D

I like the 1 beer before the race. It's good carbs!

Ooooh, that tofurky sausage bowl looks and sounds amazing!! I need to make that soooon. Excellent job on your PR! And so glad you are injury-free this time around!

Woohoo! Congrats on your PR!

Oh that salad bowl and chocolate smoothie look sooo good. Congratulations on the run! I'm sure that beer helped with the luck.

A low ABV beer is probably a good thing to drink before a race! There are so many good things packed in beer, but let's face it, we mostly drink it for the booze part. XD