Make Your Own Powdered Peanut Butter!

This is yet another post inspired by my favorite veganism/feminism/punk/fitness podcast, Rise & Resist. When I like something, I really like it. And I get so many great ideas and so much inspiration from hosts Lacy and Holly. I won't gush too much about the show since I've done so in previous posts, but if you're not familiar with the podcast, check it out on iTunes.

Anyway, at the end of each show, there's a segment called One-Rep Snax (like One-Rep Max, get it?), where Lacy and Holly share their favorite thing they've been eating lately. On one of the older shows (which I just recently listened to), Holly mentions that you can build your own PB Lean powdered peanut butter at MyOatmeal.com with all sorts of flavors and sugars and vegan protein powders. I've long been a fan of PB2 (the low-fat powdered peanut butter) for smoothies and stirring into oats, so I just had to try this custom version. I went to the site and got to work creating, and about a week later, this arrived in the mail. 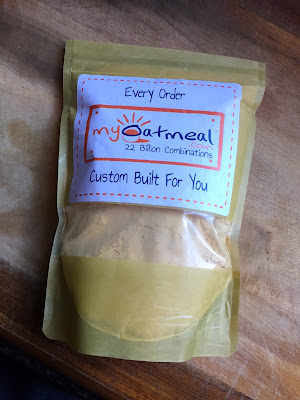 Of course, as the name of the site implies, you can also build custom oats with various fruits and nuts and flavors. But I haven't tried that yet. I did have a ton of fun customizing my PB Lean. I named mine Magic Maple Brown Sugar PB Lean because I chose maple and brown sugar flavors, plus I added real brown sugar and vegan rice protein. 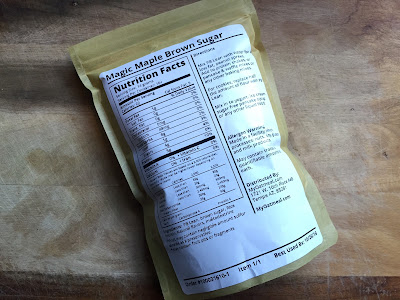 All of their flavors are vegan, and some are pretty wild — deep fried ice cream, old fashioned glazed doughnut, cake batter, lemon meringue, graham cracker crust, red velvet cake, etc. Next time, I'll try something crazy, but I wanted to be cautious with my first order to make sure I didn't end up with something gross. I figured I couldn't go wrong with maple and brown sugar. You can also add chopped nuts and dried fruits, but I wanted mine to be smooth and creamy, so I left those out. 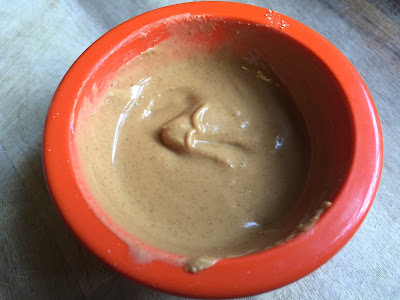 Now, I should take this opportunity to say that I have no problem at all with regular peanut butter. I'm not oil-free or anti-fat or anything, but I think powdered PB is great for mixing into liquids, like smoothies or yogurts or even pancake batter. Also, some days, it's just nice to have as a spread to mix things up. I had some straight up on an English muffin for breakfast recently, and it was delicious. The maple and brown sugar flavor is strong, and it tastes like pancakes! 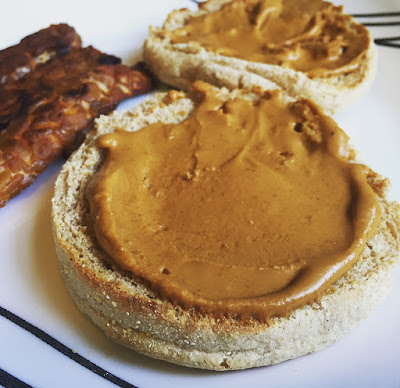 Because I added rice protein (totally optional!), my PB Lean has 10 grams of protein per two tablespoons. It does give the spread a slightly chalky mouthfeel, like most protein powders do, but I don't mind that. If you're weird about protein powder, you can always leave that out. They also have hemp protein as an option, and that might be different. Since the powder is defatted, two tablespoons has 124 calories and 2 fat grams rather than the traditional 200 calories and 8 fat grams in two tablespoons of regular PB.

It's especially delicious mixed into oats! This morning, I had a bowl of oats with PB Lean and maple-agave pancake syrup. Divine! I wish I was eating that again right now. 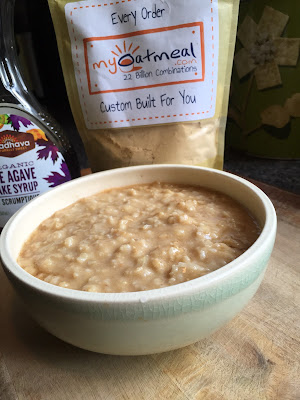 I can't wait to try making more flavor combos. And eventually, I want to try the custom oats too! The prices are a little expensive when you factor in shipping. I paid about $11 (including shipping) for an 8-ounce bag, but the more add-ins, flavors, and such you choose ups the cost. So you can always go simple and save money. MyOatmeal.com also has a few featured flavors of PB Lean and oats for those who'd rather let the professionals do the work!
Posted by Bianca at 9:32 PM

I have been trying to work out what 'One Rep Snax' meant for a while now... I still have to Google One Rep Max, but at least I understand now.

oooh! What a fun idea! I also love PB2, but I always get the brand called "Great Good Stuff" because it's organic. I'm gonna check out this company though, that sounds really fun to be able to customize it.
:)

I never picked up on the pun with One Rep Max. Ugh I feel like such a noob! XD Although for awhile I kept on thinking Lacy and Holly were shouting "WUD UP SNACKS!"

This is so cool! I checked out the flavors and they look amazing, I don't know how I would choose! I will definitely be trying this in the future!

I often buy peanut flour to use instead of protein powder, it's about $6 for a pound, and has 16g protein in a quarter cup. I use it blended in a smoothie or just with almond milk for peanutty milk!
Your version here sounds really good with the maple and brown sugar!
Ttrockwood