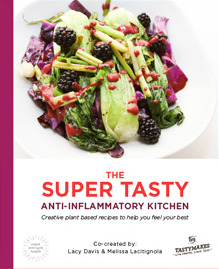 In the past couple months, I've become a bit obsessed with the Rise & Resist podcast. It's a podcast about fitness, feminism, and veganism, which are all of my favorite things combined into one podcast! Like the nerdy fangirl that I am, I've gone back and listened to every episode — mostly enjoyed during my long runs and a couple of recent road trips.

It's hosted by Lacy Davis (of Super Strength Health) and Holly Noll (of the body-posi, vegan gym NewEthic Strength & Conditioning in Oakland). Holly is also the mastermind behind my other recent obsession — FitQuick protein waffles. While listening to the Rise & Resist meal planning episode, I learned that Lacy has an e-cookbook focused on anti-inflammatory foods. I've got a half-marathon coming up next weekend, and I'm always battling a little runner's knee and hip bursitis — both inflammatory conditions. So I ordered the book!

The Super Tasty Anti-inflammatory Kitchen is co-written by Lacy and Melissa Lacitignola. Each chapter focuses on one anti-inflammatory food and includes a breakfast, lunch, snack, dinner, and dessert recipe using that food. There are chapters on ginger, turmeric, berries, chilies, almonds and walnuts, and leafy greens. Since my race is coming up, I've been loading up on anti-inflammatory foods and making quite a few recipes from the book.

I started with this Turmeric Mango Smoothie — lettuce, fresh ginger and turmeric, banana, mango, and plant milk. I added a scoop of Vega One Natural protein powder since I had this after a morning run. I love the sneaky greens in this smoothie! Also, it's loaded with fresh turmeric, which I'd never used before. The turmeric has a mild flavor, so the mango really dominated. 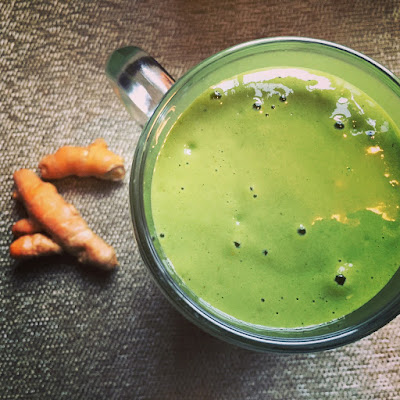 In the episode of Rise & Resist where Lacy mentions that she has an e-book, she and Holly were discussing sauces to use over veggies or bowls. Lacy rattled off the ingredients in her ginger-miso sauce, and it sounded delicious. That's when I knew I needed to order the book! So of course, I had to make the recipe that uses that sauce — Dinosaur Kale Salad with Ginger-Miso Dressing. This is an oil-free kale salad, but the kale is still massaged with the ginger-miso sauce. It also has carrots, red bell pepper, and sunflower and pumpkin seeds. I added baked tofu for extra protein. Delicious! And so healthy! 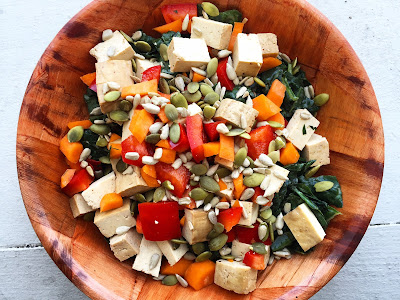 I knew that ginger and turmeric were great for inflammation, but I wasn't aware that almonds were anti-inflammatory foods. That's great news because I love almonds! One of the snacks in the book are super-simple Sprouted Almonds — almonds soaked in water overnight to break up the nuts' natural enzyme inhibitors. I had these as a morning snack at my desk at work. 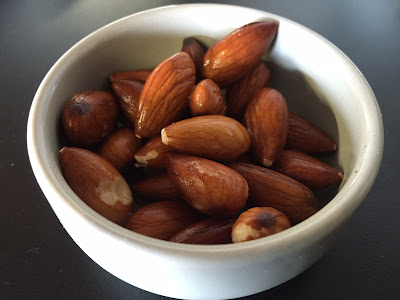 I was also surprised to learn that leafy greens were anti-inflammatory foods. I eat something green almost daily — salads with romaine or sauteed kale or spinach or chard. But the more greens, the better! I had this Raw PB&J as a pre-yoga snack before my night class last week. The spread is actually almond butter (not peanut butter), and it's mixed with banana and topped with fresh, muddled strawberries. The recipe recommends using a kale leaf, but that sounded too hardcore for me, so I opted for romaine. Perfect thing to keep me satisfied through an hour of yoga, and then I had a full dinner when I got home. 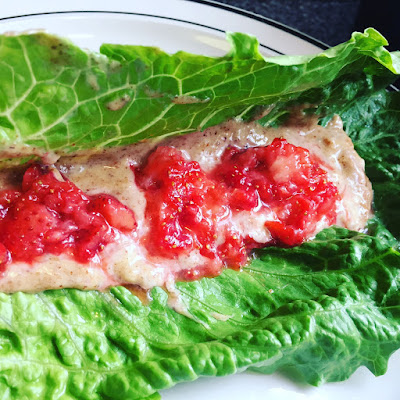 So far, I've mostly shown you raw (or mostly raw) recipes from the book. There are a lot of raw dishes. But there are plenty of cooked meals too! Tonight, I selected the Chana Masala from the chapter on chiles. It called for cayenne powder, which I added. But I upped the anti-inflammatory factor (and spice factor) by adding a chopped serrano chile as well. I love how many veggies are in this chana masala — carrots, bell pepper, broccoli, onions, garlic, ginger! The flavor was spot-on, thanks to toasted whole mustard and cumin seed and coconut cream. And you can see from the color that there was plenty of anti-inflammatory turmeric in there too. 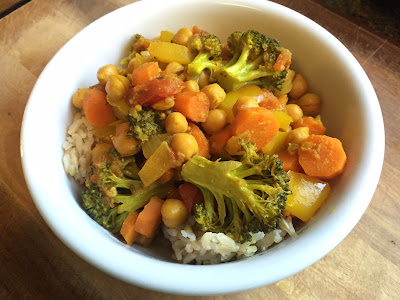 Since I've been making an effort to eat anti-inflammatory foods daily, I have noticed less knee pain. And thus, I've not been popping as many anti-inflammatory pills lately. I'd much rather get my pain relief in the form of food rather than drugs. That said, there are times when nothing works better than ibuprofen. But if I can keep pain at bay with food, I will!

Oh, this looks fascinating. I have been enjoying Rise and Resist quite a bit lately, though I generally skip the episodes that seem particularly focused on their fitness because I don't really lift. I have loved so many of their other episodes though!
I am also trying to add more turmeric into my diet for anti-inflammatory properties. I didn't even know that almonds or greens were anti-inflammatory!

Thanks for the info! I try to eat turmeric daily, but I had no idea greens and almonds were anti-inflammatory!

I have Lacy's e-book too! It is so good! Even though it's an e-book 9.99 seemed so cheap for all the great recipes and photos in it. I printed mine and put it in a binder. Total Rise & Resist fan-gal too, I even did one of my Mofo posts on it. Hope your inflammation cools down. Love your blog too, I read it everyday but rarely comment (because of an annoyance with having to sign out/sign in of my google account linked to blogger and comments still disappearing blah blah) I love seeing what the south is like from where I am up north and your super posi-vibes, you're one very cool gal (and you have a great cook book too!)

P.S. I totally nerded out and did the same thing! Printed the whole thing and put into a binder. I don't have an iPad, and using e-books on a laptop can be a little weird. So I made it into a printed cookbook! Glad to know I'm not the only weird fangirl doing stuff like that!

Oooh what a great idea for an e-book! The raw ab&j looks delicious. The smoothie sounds great as well!