My mama turned 62 today, so I drove to Arkansas to celebrate with my parents. They live about an hour away, so it's easy to meet up with them for a quick weeknight dinner. My mama loves Mexican food, so we typically go out for that every year on her birthday. And there's a new Mexican joint (with a full bar, which is a big deal in the dry county they live in) that just opened in their neighborhood.

It's called Pepito's, and they had a few veganizable items on their menu. But first, mama and daddy ordered margaritas. I opted not to have one because I wanted to save more calories for chips and salsa and birthday pie! Mama had a mango margarita. 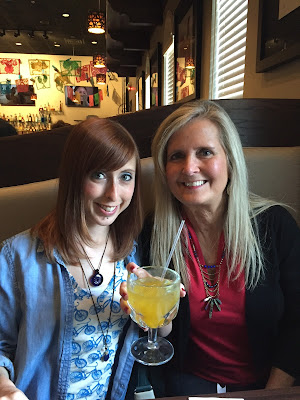 While they imbibed, I chowed down on so many chips and so much salsa. Pepito's has amazing garlicky salsa. 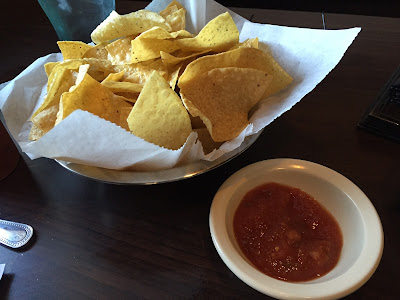 I ordered the Vegetable Fajitas, which came with a ton of awesome veggies — cauliflower, carrots, broccoli, spinach, onions, and mushrooms. 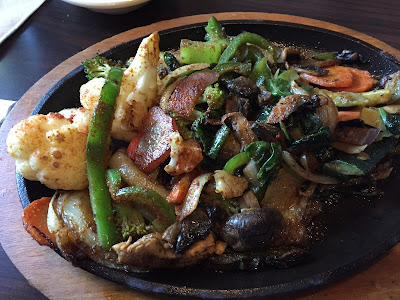 I asked them to hold the cheese on the refried beans and to leave the sour cream off the guacamole salad. Just in case you're wondering, I have no idea if the beans and rice is actually vegan-safe, but my rule about Mexican restaurants is not to ask too many questions. If the rice and beans are included with the vegetarian entree, I'll assume they're okay to eat. And I really don't want anyone to tell me otherwise. I have a pretty strong "don't ask, don't tell" policy for dining out. It saves me a lot of headache from asking a million questions, and it makes veganism look more accessible to those people you're dining with or ordering food from, which I believe, does more for the animals than me asking a million questions. (By the way, I led an awesome discussion about this very issue at the last Vida Vegan Con, and there were people on both sides of the issue. No judgement either way. But that's my policy). 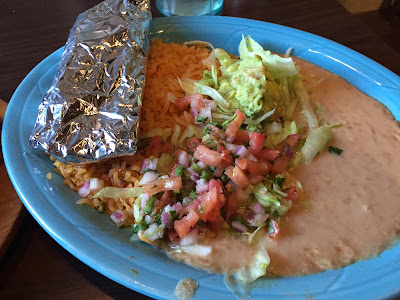 We went back home for my mom to open presents. I got her a couple bottles of nice wine — an Italian merlot and a French rosé. And my dad got her a GIANT bottle of Patron. And then it was time for dessert! My mama had made a Vegan Peanut Butter Pie about a week ago, but she and daddy only had a small slice and then she stuck the rest in the freezer to save for the next time I was in town. And that just happened to be today — her birthday! So rather than make or buy fresh cupcakes, we thawed out the pie. 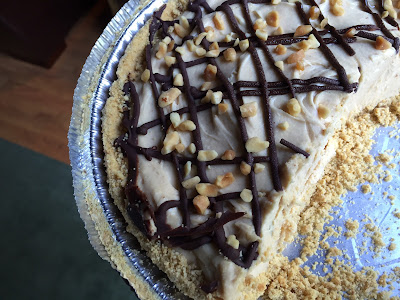 OMG this pie was soooooo good! She made it using Daiya cream cheese and So Delicious CocoWhip, so it was light and fluffy and cheesecake-like. Perfect with the graham cracker crust. I had a small-ish slice, but I probably could have easily eaten half the pie.

I'm so glad I have fajita leftovers for Cinco de Mayo!!
Posted by Bianca at 8:48 PM

I love that you have a "don't ask, don't tell" policy for Mexican restaurants. Recently, my fiance and I drove across the country from NJ to CA, through the south, and we ate a TON of Mexican food, since it's cheap, accessible, and generally veganizable. I learned pretty quickly that I just had to hope for the best and trust that what the kitchen was feeding me was actually vegetarian. I'm sure that one or two times, it wasn't what they said. But I tried my best.

I'm a long time reader but don't often comment. My policy for eating out is somewhat similar to yours and I'm glad to know someone else is in my boat. Sometimes I end up getting policed more by non-veg friends who I eat out with than anyone else! Anyway, looks like a fun birthday celebration. That pie looks soooo good! Happy bday to your mom!

Your mum is stunning!

I am with you on the dining out issue. I try to make eating vegan look really easy to non-vegans as like you I think that this ultimately does more for the animals.

I was influenced to turn vegan initially by a boyfriend who made eating like this look like an utter joy rather than a chore or an act of martydom. That inspired me to read, learn and go this way.

Your mom is so beautiful! Your dinner looks delicious! I could not agree with you more about dining out. Although I don't dine out that often, I do believe that asking a million questions and being stressed, and stressing everyone else out is not good for animals. I love dining with skeptical non vegans and showing them how easy breezy it can be to eat kindly! Happy birthday to Mama Crunk!

I don't like to ask lots of questions either, but not knowing if there was lard in my beans or not would ruin my appetite. I feel like it's just easier to ask and then order whole pinto or black beans if the refried ones end up having lard.

I sometimes follow the don't ask don't tell policy, especially for first visits. Nothing is sadder than getting to a place and finding out the burger buns aren't vegan, or that you can't have rice and beans. I usually will ask 2-3 questions, then if I come back, I will go a little further.