Come Dine With Us!

So my friend Stephanie (a.k.a. Poopie Bitch) is kind of obsessed with the British food reality show, Come Dine With Me. I'd never heard of it until she mentioned it recently, but on the show, four strangers each take turns hosting a three-course dinner party at their house for the four of them. After each dinner, the three guests who didn't host score the party on a scale of one to 10. The host with the highest score wins.

Stephanie got this crazy idea in her head to try a real-life vegan version of the show with a few friends. She tossed the idea out, and we discussed it over Facebook. When we started the discussion, we had five friends, so we planned to have five dinner parties. But Cassi isn't able to participate because of another exciting commitment. So now we're down to four — Stephanie, me, Pam, and Megan. Wait — let us take a selfie. 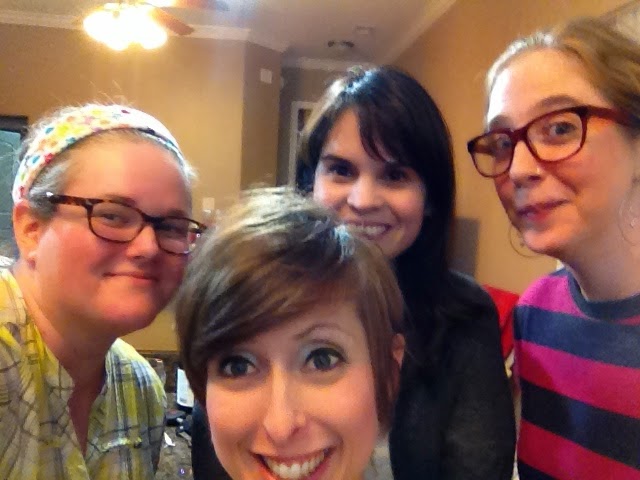 Since the rest of us hadn't seen the show before (it doesn't air in America), we had a "Dips 'n' Shit" snacky themed potluck tonight at Stephanie's and we watched one episode. Stephanie made the most AMAZING Chickpea Fries with Tahini Dipping Sauce. 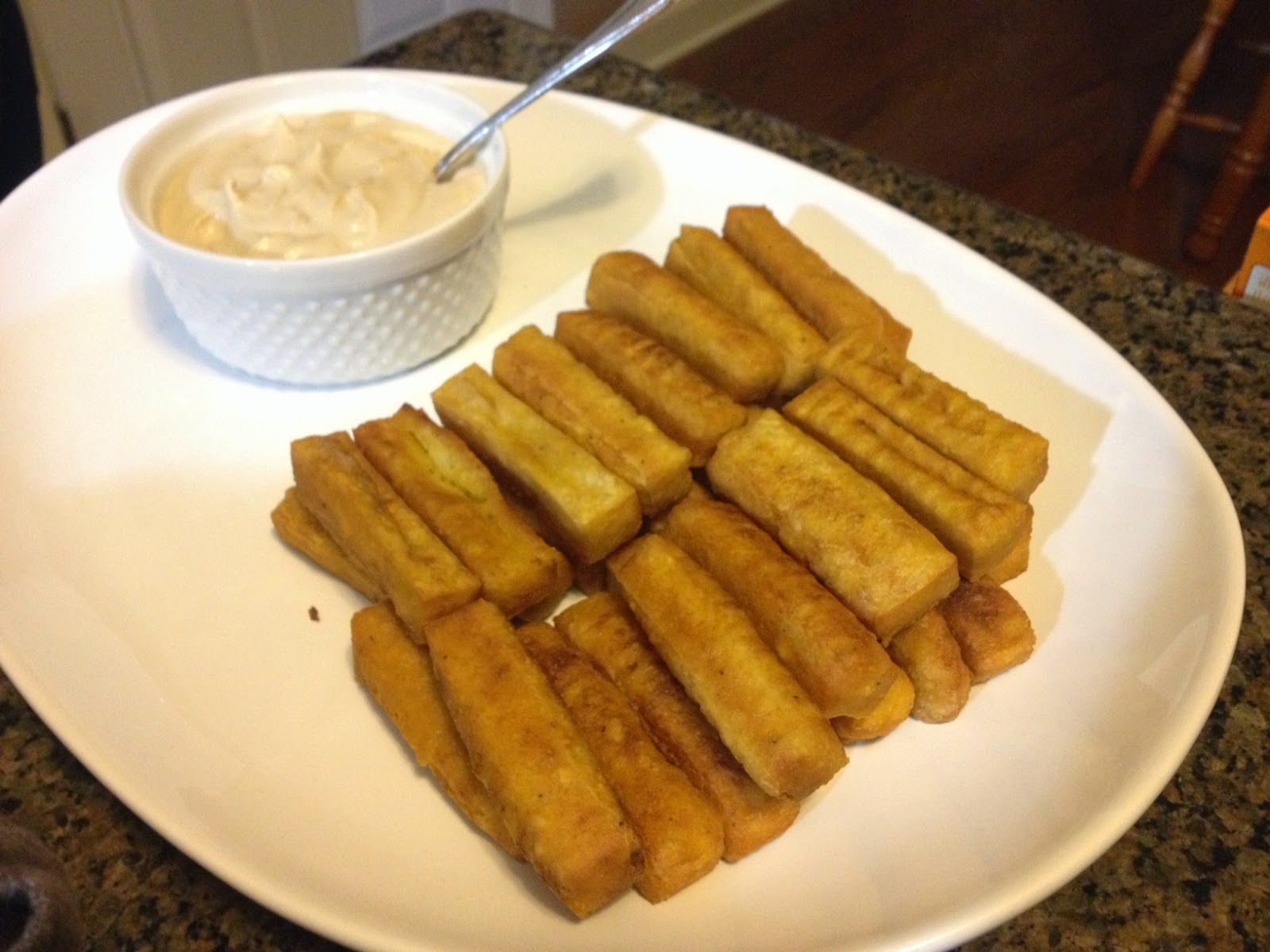 And she put out some Bread with Herbed Olive Oil. 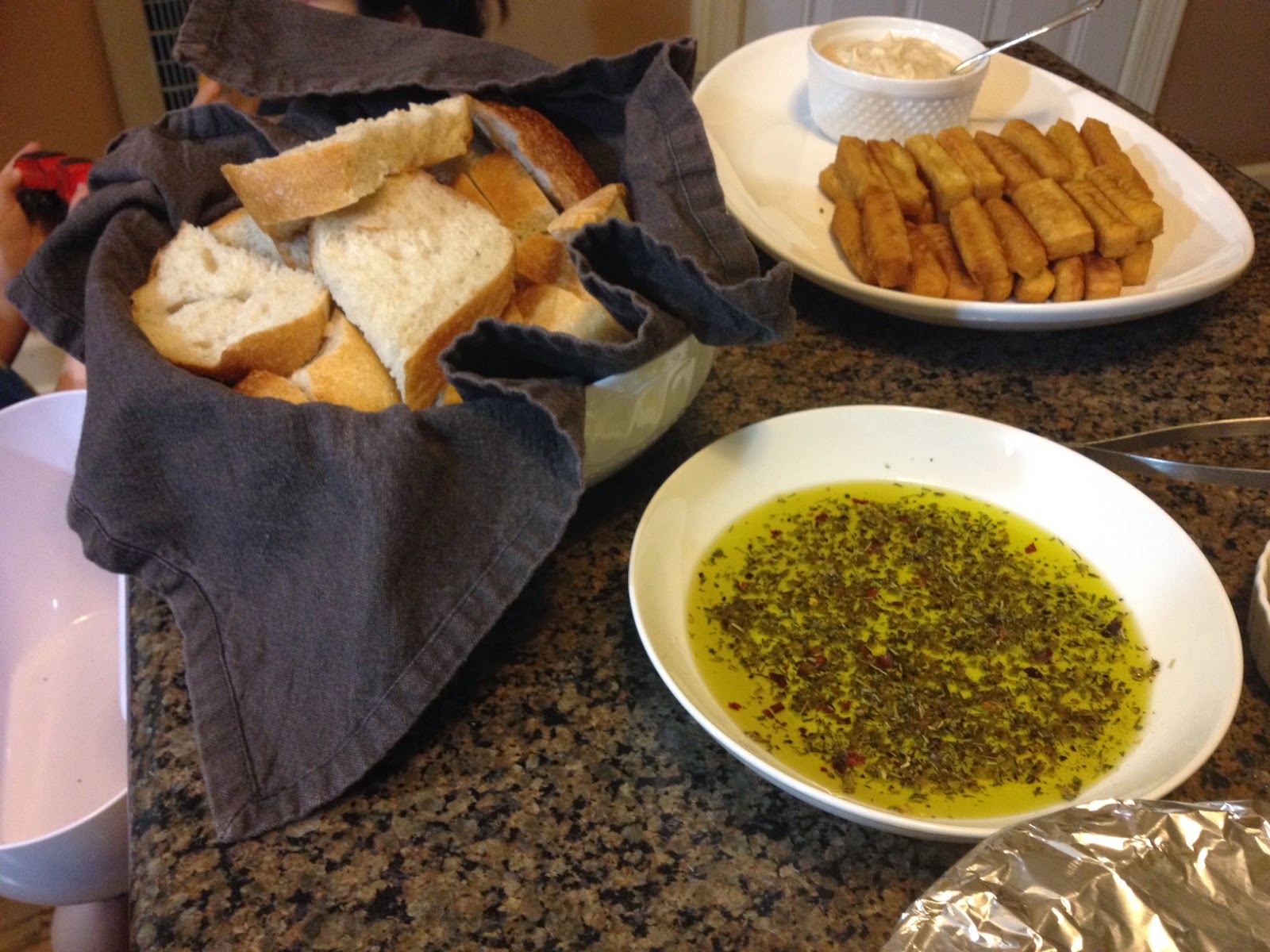 And Dolmas, Peppadews, and Olives. 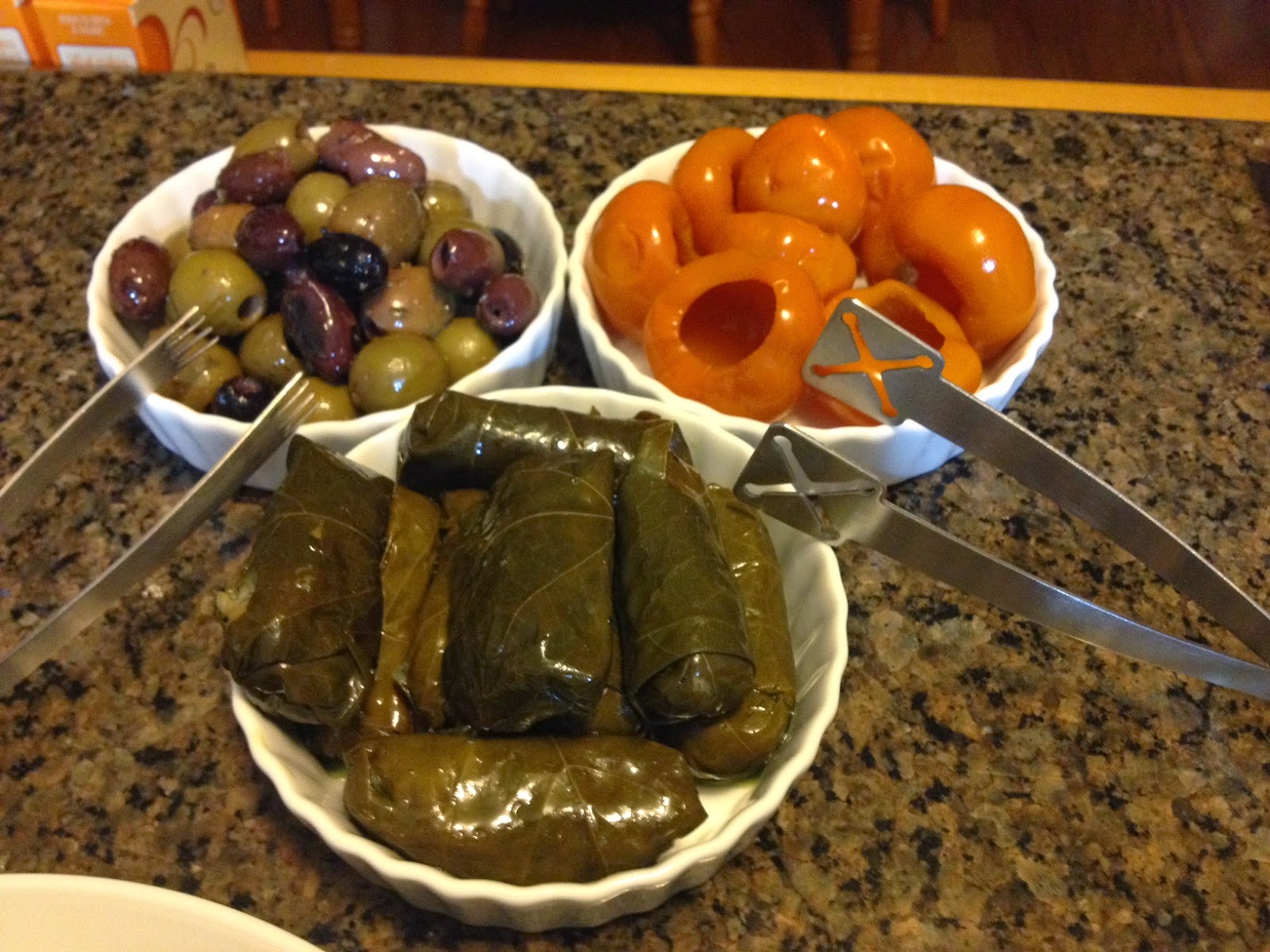 I brought the low-oil Spinach and Artichoke Dip from Joni Newman and Gerrie L. Adams' new book, Going Vegan (more on this dip and this book in a full review post soon!). 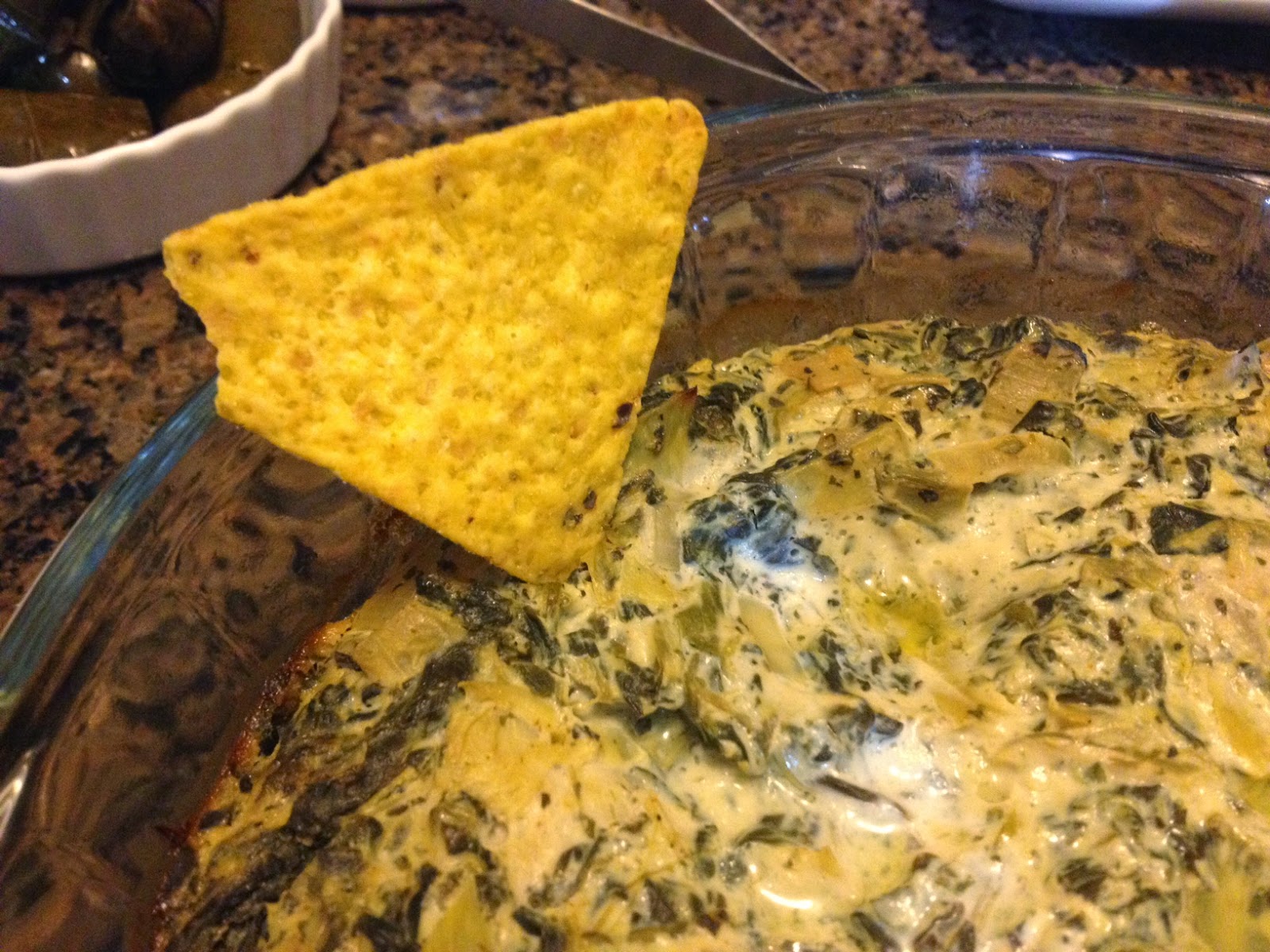 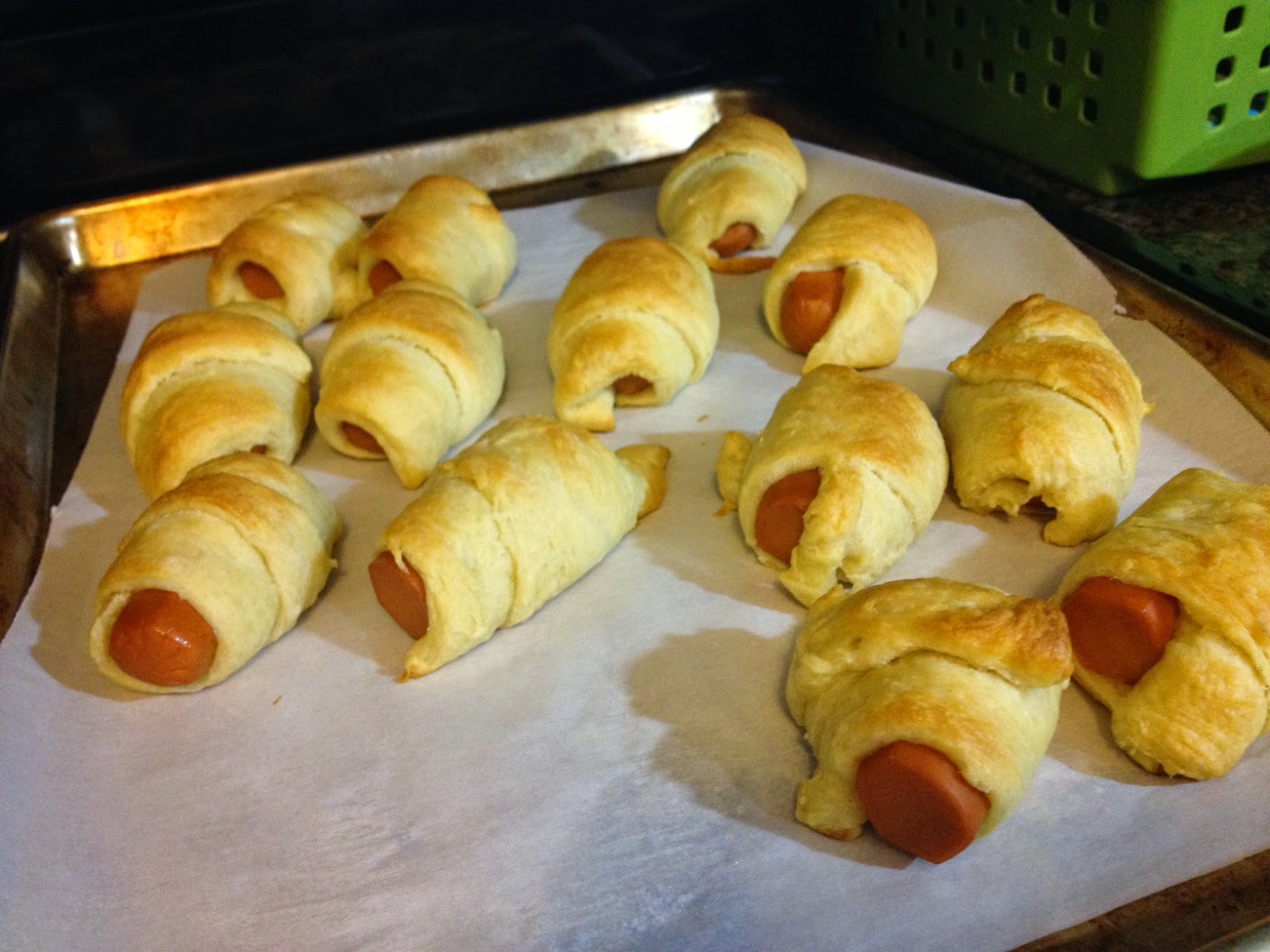 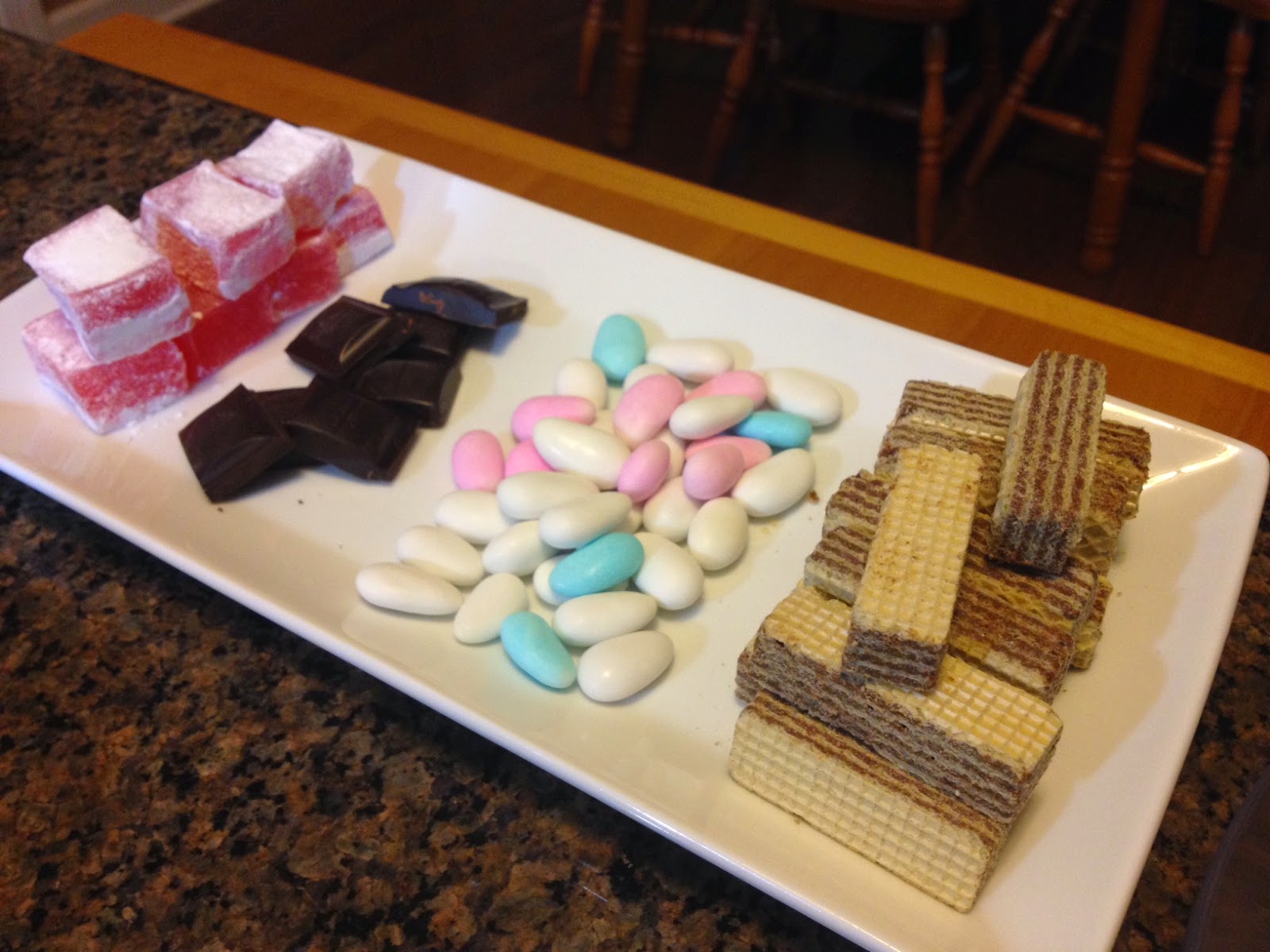 OMG, have y'all tried those Manner wafers? I think they're made in Austria, but Steph picked them up at an international market here. Imagine a wafer with Nutella cream that's vegan! Yes. I could have eaten all of those!

Anyway, we're launching our dinner party competition on October 8th. I'll post about each one, and we're hoping to have video (like a real reality show!) too. Expect cattiness, drama, and lots of "girl, no she didn't!"
Posted by Bianca at 11:01 PM

oh man I would so try to weasel my way in to these parties. Chickpea fries!!! We have similar wafers here (Australia) called Napolitanke but they're dangerous because of how addictive they are. Then I get to a point (without warning, just one too many wafers) where I feel sick. But then I eat more anyway.

We have a show like this in Quebec. And a few vegans made a show similar to that but with text and pictures more than videos. It was a lot of fun.

I am in the UK and love the bitchiness of Come Dine With Me. Unfortunately they are often very scathing of vegans and vegetarians often eat fish (?!), so it gives out a very bad message for veganism and vegetarians x

oh my gosh! What a super fun idea! I can't wait to see your posts about competitive entertaining! ha ha. Also, yes to the wafer the cookies... my husband is totally obsessed with wafer cookies.

Ha, sounds like fun! I've only seen a couple of episodes of Come Dine with Me (like Fran says, they're unfortunately pretty negative about vegetarianism and veganism), love this idea and putting a vegan spin on the show! :)

I'm totally moving to Memphis so I can be part of this! :)

I need the recipe for the chickpea fries and dip, pretty please!

Oooh, those chickpea fries look AWESOME!! And those wafer cookies...I really love a wafer cookie...may need to try to order some of those soon!

It's one of my favourite shows! I've started a vegan Apartment Supper Club here in Leipzig inspired by the show, It's taken a while to take off and promotion has been hard but we have our first dinner this saturday night! Maybe people might be so kind as to like our Facebook page? Is that too spammy? Deutsch folks don't seem to quite get it yet and I'm hoping some word of mouth will eventually help... yet...https://www.facebook.com/apartmentsupperclubleipzig

Sounds like so much fun! Can't wait to see the result of that. And yes, I'd definitely eat those hazelnut wafers in less than a minute!


This is the greatest idea ever!! I want to play! Also Poopie can you make me those chickpea fries?

You all are so fun! I never heard of the show but am very much looking forward to your version of it! What categories do you score on?

I have watched a show with the same concept on The Food Network! I loved it-will definitely look for this show.