Keep On Crunkin': Vegan Life in the Dirty Mid-South

This is the second in a series of blog posts for my cookbook's social media campaign, cleverly titled "Keep On Crunkin'." My publisher, Book Publishing Company, and Vegan Mainstream have joined forces for this seven-day promotion filled with giveaways, contests, etc. I'm inviting you to get crunk with me! Every day, I'll share recipes, giveaways, and tips, and there will be a social media action that you can take on the 7-day Vegan Crunk Challenge for a chance to win a copy of my cookbook, another BPC cookbook, or a Cookin' Crunk apron!

All taking the challenge means is that you'll read along and cook along with me. If you don't have my cookbook yet, pick one up! You can even buy one right here on my site using the Paypal button on the right side of the blog.

As vegans, the number one question we get asked is "Where do you get your protein?" followed closely by "How can you live without cheese?" But as a Southern vegan, I hear another question even more often — "How hard is it to be vegan in the land of fried chicken and BBQ?"

My answer: "It's not hard at all!" I'm lucky that I live in a city — Memphis — with three totally vegan restaurants (and a fourth vegan restaurant, a drive-through, called Loveshack, opening soon!). Plus, numerous Memphis restaurants have vegan selections or even separate vegan menus (see my dining guide for more on Memphis vegan options).

But Memphis hasn't always been so vegan-friendly. When I gave up dairy and eggs in 2004, there were no vegan restaurants and only a handful of places that had decent options (Taco Bell and Subway were, like, my best friends back then). So I had to learn to cook for myself.

Now, if you've read Cookin' Crunk, you might remember that I grew up in my mama and Granny's kitchens. A love of the culinary arts was instilled in me early on. But cooking vegan food was a whole new animal (Is that a vegan-appropriate phrase? Oh well). I learned some basics for substituting vegan cheese and how to bake without eggs. I learned how to make my Granny's coconut cake. My mama and I figured out how to veganize her famous Thanksgiving dressin' (both the pie and the dressin' recipes are in my book!).

Suddenly, life as a vegan in the Dirty South wasn't so hard after all. And I think that just goes to show that, no matter where you live in the U.S., going vegan can be easy. As long as you have access to beans, tofu, grains, veggies, and fruits, the switch won't be too hard. I know many of you are already vegan, so such encouragement isn't necessary. But for those readers who aren't vegan, well, I'd like to invite you on the 7-day Vegan Crunk Challenge too!

Part of the challenge is cooking along with me. So I'll be sharing some recipes from my book a few times this week. Below is one those recipes that I learned to veganize before Memphis was the vegan-embracing city that it is today. This is a variation on the Yella' Cake recipe in my cookbook. But first, a few actions for the day!

Today's cookbook giveaway action: Encourage someone to take the Vegan Crunk Challenge with you!! Tag them in a Facebook post and be sure and tag @Vegan Crunk (so I can count your entry) as well. Later this evening, we'll randomly select a winner for a cookbook — either Cookin' Crunk, Artisan Vegan Cheese, Vegan for the Holidays, Raw Food Made Easy, or Enlightened Eating — from those people who have tagged me. Contest closes at 11:59 p.m. CST. 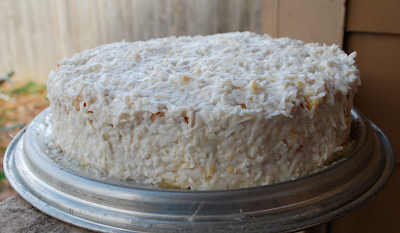 Coconut Icebox Cake
Yields one two-layer cake (about 16 servings)
Believe it or not, this coconut-covered yellow cake tastes better and becomes moister after a night of refrigeration. Of course, you don’t have to wait to dig in, but if you can tame your coconut cravings for a few hours, it’s certainly worth the wait.

Stir together the flour, baking powder, salt, and turmeric in a large mixing bowl. Set aside. Beat together the sugar and the margarine using a stand mixer or a handheld mixer. Add the yogurt, soymilk, and vanilla and continue to beat until combined.

Add the flour mixture to the butter mixture in two alternating batches, beating each time until just combined. Do not overmix. A few little lumps are okay.

Spread the half the batter into one cake pan and the other half into the other cake pan. Place into the oven and bake for 20 to 25 minutes or until a toothpick inserted in the center comes out clean.

Allow the cake pans to cool for about 15 minutes. Then carefully turn each pan upside down on top of a wire cooling rack. Gently the pat the bottom of the pan to loosen the cake. If necessary, you may need to run a butter knife around the edges of the cake to loosen the sides from the pan. Once the cakes are removed, allow them to cool completely on the wire racks.

To make the frosting, stir together vegan sour cream, sugar, and coconut in a medium mixing bowl.

When the cakes have cooled, place one cake right-side-up on a serving plate. If the top is rounded, you may need to scrape part of the cake off with a knife to make a flat surface. Spread about 1/4th of the frosting on the top of that cake.

Place the other cake right-side-up on top of the bottom layer. Spread the rest of the frosting on top of the cake and around the sides. Refrigerate until ready to serve.
Posted by Bianca at 12:30 AM

I just got your cook book in the mail last night! So excited! I'm not on any social media-twitter/facebook ect but I'll follow along with the recipes.

Ohhhh man that looks delicious! We have been on a vegan baking kick lately. Living in Thailand at the moment and we now have a place to experiment with food. Going to have to try this recipe. Thank you!

Oh my goodness - icebox cake! I grew up in the south and this was a staple to say the least, especially at family gatherings. Will have to try this out very soon!

This looks delicious, I would need to find a replacement for the sugar and white flour though. Simple substitutions work? Like Honey and Wheat?

Kelley, I first tried all my cake recipes with whole wheat pastry flour but they didn't rise as well and came out a little gooey. Not horrible, but nothing I would serve someone else. You could swap that out though and it would still be tasty. As for sugar, I don't use honey since it's not vegan. But you could try that. Or agave. Since they're liquid though, it might throw off the dry to wet balance though. I use evaporated cane juice in all my baked goods. It's not as refined as white sugar.

AMAZING. Need to try this!!!

Hi Bianca! So excited about your book. I love southern Americana style cooking. I think you would enjoy our foods at Homegrown Smoker BBQ in Portland, Oregon. If ever you are in town, look us up and we will hook you up with some real, down home smokey, bbq goodness. Peace!