During my Thrive Forward cleanse in January, I received a copy of Raw Food for Dummies by Cherie Soria and Dan Ladermann to review. And although all the recipes in the book meet Thrive standards, I wanted to be a total nerd on my cleanse and only make Brendan Brazier's recipes. So I didn't get around to trying anything from the book until this week.

I went with this Creamy Red Bell Pepper-Chipotle Soup: 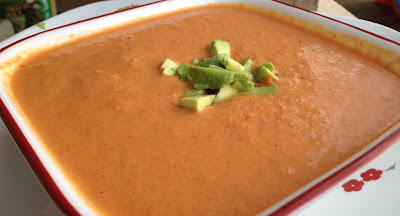 It's a blended soup made with soaked cashews, red bell pepper, chipotle pepper, chopped tomatoes, miso, nutritional yeast, and a lot of spices. The cashews gave the soup a creamy quality similar to that of a soup made with almond milk or soy milk. I added the avocados just for fun. Avocados are SO MUCH FUN!

Anyway, this soup was delicious. And plenty of other recipes look equally yummy. There's a Massaged Kale Salad with raisins and cashew mayo, a homemade Sweet Almond Butter, Zucchini-Pepper Wraps, and Corn Tortillas (made with raw corn in a dehydrator!!!!).

Like most books in the Dummies cookbook series, this one is about one-third info on raw food and two-thirds recipes. The info section is pretty useful. There's an ode to the Vitamix, a guide on growing a "kitchen garden," a section on fasting, and sample menus for 31 days of raw eating.

About those sample menus: They actually account for leftovers! The menus suggest eating the same meal every other day, so you don't waste. I always hate how sample menus in most books don't account for leftovers. Also, the menus include food prep instructions for the next day's meals, so you can be prepared. And the menus are more high raw, so they include some cooked grains and steamed veggies. I can't say enough awesome things about these sample menus!!

But I need to say some awesome stuff about my other review product — Ezekiel 4:9 Flax Bread. Food for Life sent me two loaves to test out, and I couldn't be more thrilled with them. One of the long-term adjustments I'm making post-cleanse is to stick with sprouted grain breads as often as possible. That doesn't mean I won't eat some white bread in a restaurant or even a whole grain baguette at home. But when I'm making sandwiches, burgers, burritos, or toast, it'll be sprouted grain for me.

I've tried the flax bread on Tofurky sandwiches and spread with some awesome vegan cashew cheese that I'll be posting about very soon. But when I had the raw bell pepper soup above, I had a slice of Avocado Toast with Hot Sauce on Sprouted Flax Toast: 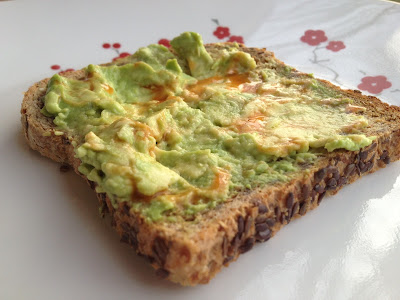 The taste is very similar to that of the regular Ezekiel 4:9 bread, but it's loaded with omega-rich flax seed. I'm always looking for new ways to work more flax in!
Posted by Bianca at 10:28 PM

The cookbook sounds like it has a lot of helpful information. I already have Cherie Soria's "Raw Food Revolution," and it has some tasty recipes. There's just something about the whole "_________ for Dummies" thing that turns me off, though. It may be silly, but I'm not keen to get a book that's simultaneously insulting me as I'm buying it. :)


I'll keep an eye out for that flax bread! I love a good seedy bread.

I had no idea Dan and Cherie had a new book out, those guys are awesome. And I'm agreeing with the massive fun of avocados. That Ezekiel bread is great, I've picked it up a few times when I'm feelin' fancy.