About a month ago, I received a sample bottle of Lil' Shuga natural sweetener to review, but I'm a little behind on review posts. So I'm just now getting around to reviewing it.

When the folks from Hey Shuga! emailed me, I'd never heard of their organic cane sugar and stevia sweetener. But I knew that with a name like "Lil' Shuga," it had to be awesome. I mean, come on, how adorable is that? If this glass bottle had cheeks, I'd just want to pinch 'em. 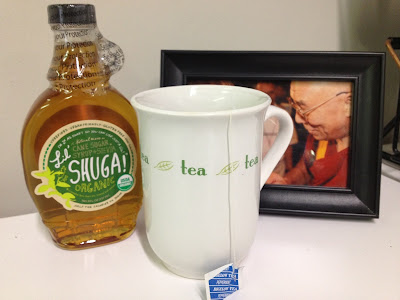 Yes, that is a picture of the Dalai Lama on my desk at work. It's actually a shot of His Holiness laughing after he jiggled my lip ring at a media event in Memphis a few years back (You can see the full picture here. I'm on the other side).

Anyway, as I mentioned, Lil' Shuga is made with a blend of organic cane sugar and stevia. That stevia helps cut the calories, so there's only 10 calories in a 1/2 teaspoon. That's about the same as a teaspoon of agave or sugar. But since it's twice as sweet as agave or sugar, you can get by with using 1/2 a teaspoon where you'd typically use one whole teaspoon.

But how does it taste? I first tried a little 1/2 teaspoon in my peppermint tea. I don't like hot tea unless it has some sweetener, and this was perfect. I've never been a huge fan of straight stevia. Even though its natural, it seems to have a chemical taste to me. But Lil' Shuga doesn't have that overpowering stevia taste. In fact, it tastes a lot of honey!

You can use this stuff in baking or for glazes and such. But I've mostly been using my Lil' Shuga in tea and hot cacao. It's a perfect way to cut down on the calories in your morning cup. But I've also found that it makes a fantastic pancake syrup.
Posted by Bianca at 10:51 PM

That picture is so great! I'd have to keep it on my desk too. What were your impressions of him when you met? It seems like he'd have a really calming presence.

My first two thoughts were pancakes and pastries. Hahah
Btw that picture is so sweet. :)

I haven't seen that pic before - it is AWESOME. The Dalai Lama is the cutest.

Stevia tastes funky to me, too. This sounds interesting though. I'll have to give it a try.