I really want to show y'all the hot wings that I made for the Superbowl tonight. But since the recipe comes from a new vegan cookbook that I'm planning to review tomorrow, I'll hang on to those pictures for a minute.

Tonight's post is sort of Superbowl-related though. If you've had one too many Fat Tires or Blue Moons tonight, I have a hangover cure for you! I first tried Alicia Silverstone's Cure-All Tea from The Kind Life during my January cleanse. It's made with three ingredients — umeboshi plums, shoyu, and kukicha tea: 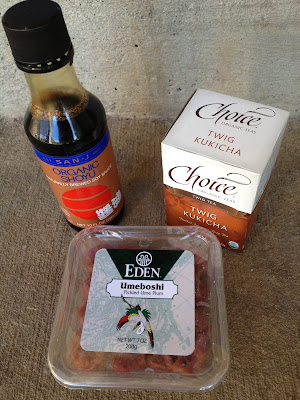 The plums are super pricey ($20 for a package at Whole Foods!), but I splurged because the benefits sounded awesome. The tea supposedly restores minerals to the blood, and Alicia recommends drinking it for hangovers, to soothe digestion, to reduce heartburn, for nausea, and to combat the negative effects of eating white sugar.

Is it based on actual science? I have no idea. But I'm kind of new age-y, and I believe some stuff just works cause it's magic. I'm also a diehard Clueless fan, and I'll believe anything Alicia Silverstone tells me.

But I can vouch that this tea actually has worked for me. While on my cleanse, I hosted a birthday party for my friend Greg, and I let myself have a few glasses of wine as a cheat. Also on the cleanse, I planned a cheat day for Stephanie's birthday, which meant lots and lots of sweets. I drank this tea following the wine night and the sugar day. And you know what? I felt better! Maybe it was all in my head, but the tea really did seem to lessen the effects of both alcohol and sugar hangovers.

I also really love that the tea is savory. The pickled plums are very salty when eaten on their own, and shoyu is salty too. The kukicha tea is a Japanese twig tea, and it has a nutty, roasted flavor.

If your hangover is super bad, you can even suck on the pit of a plum (per Alicia's advice), but a mild hangover only requires one-fourth to one-half of a plum. So even though they're pricey, one package of them should last quite awhile.
Posted by Bianca at 10:59 PM

That sounds amazing, and like it would totally cure a hangover, I always crave salty foods after a night of drinking. I usually try to have some of those 'Emergen-C' vitamin/electrolyte drink mixes on hand as a cure, which I guess is working on the same principle. But salty sounds so much better.

"I'll believe anything Alicia Silverstone tells me"--I'll drink to that!

I love this tea and keep plums on hand just for such occasions. Sucking on the pit does help when one is feeling the pain. It's a fab cure for what's ailing.

$20.00 for umeboshi! You paid waaay too much. If you have a Japanese market in your area, you could had only spent a couple of bucks on a bottle.

I love kukicha tea and do feel like it really makes me feel better when I drink it, hang-over or not. It's supposed to be very alkalinizing. And I love the toasty taste.

I use this remedy regularly when I've over-indulged on sugar or just food in general. It totally works! I also drink kukicha on its own daily- i love it! This was definitely my favorite take away from The Kind Diet.

Alicia Silverstone would never lie to us- and Clueless will always be my fave :)

Also love the shoutout to some yummy Colorado beers!

Umeboshi is a super pro biotic like kimchi:)
Yeah. Whole foods=over priced for many ethnic foods.