With the Keep On Crunkin' campaign over, I've got lots of food pics backed up, so this post will be dedicated to stuff I ate over the past week. Admittedly, I did have some frozen Tofurky vegan pizza and a few freezer meals over the week since I didn't feel pressured to cook by blogging obligations.

But I did get busy in the kitchen a few times. Some time around Valentine's Day, I made this Beer Cheese Soup from Betty Goes Vegan: 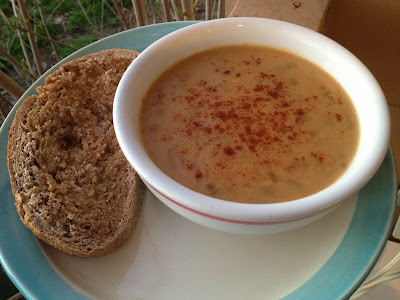 Wow! Just wow, wow, wow! When I was a kid, Campbell's condensed cheese soup in a can was my very favorite food. Of course, it didn't have beer in it. But this soup combines that childhood favorite with the tanginess of a nice lager (I used Brooklyn Lager). The cheesy part is melted Daiya. Lots and lots of melted Daiya, like two whole cups worth.

I also sampled my first vegan Butterfinger bar last week! Imagine Vegan Cafe sells Go Max Go candy bars, and they just started carrying this Thumbs Up Bar, the vegan version of a Butterfinger. It reminded me of a chocolate-covered Chick-o-Stick (Mama, if you're reading this, yes, I'll buy you one to try ... my mama LOVES Chick-o-Sticks): 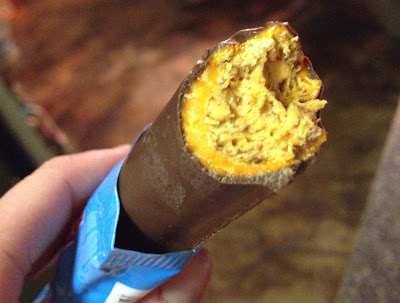 For breakfast last week, I had Savory Oatmeal Porridge from JL Goes Vegan: 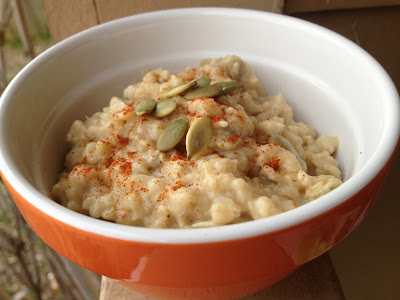 I prefer my oats savory instead of sweet, and this bowl really hit the spot. Oats are cooked with pumpkin seeds, slivered almonds, amaranth, nooch, veggie broth, and almond milk. She gives instructions for cooking the oats in a rice cooker, but my rice cooker makes me nervous. I don't trust cooking appliances that I can't open during cooking because I fear things will burn. So I cooked this on the stovetop instead. The recipe adapted really well.

On Sunday afternoon, our vegetarian club — Food Awareness — gathered at member Vaughan's house for a film screening of Tom Shadyac's documentary I Am. It's about how we're all connected to the earth and each other. You know, hippie stuff. 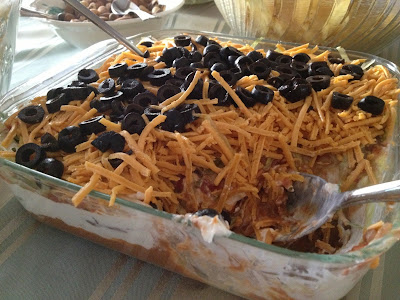 It has Daiya cheese, Tofutti cream cheese mixed with vegan sour cream, black olives, refried beans, salsa, and lettuce. I ate a TON of this! But I tried my best to save room for dinner. Vaughan made a healthy pot of Red Lentils with Carrots: 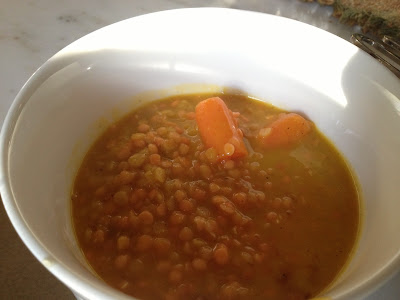 He also made a barley dish, a buckwheat dish, kale, and collards. And member Pat made a yummy butternut squash and rice dish: 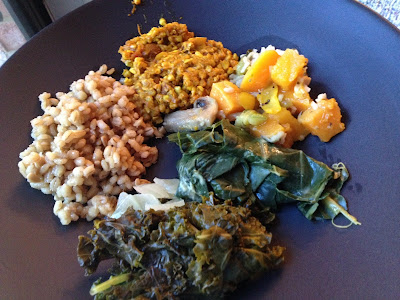 I brought dessert, but I'm saving that picture for a future post. It was from Chloe's Vegan Desserts, which I'll be reviewing very soon.
Posted by Bianca at 10:59 PM

Thank you for sharing that with your readers.

Yay! So happy you liked the porridge!

You really should try cooking grains in the rice cooker. Oats come out so well and do not burn. Barley works well, too. I use a rice cooker with a timer to have my porridge ready when I wake up in the morning.

OMG, I <3 Chick-O-Stix, too! They don't have them very many places up north though. Yankee Problems.

I want to try that candy bar!!! Also, very intrigued by JL's savory porridge! Heading over to her page to check it out! I'm trying to get caught up on your posts after an insane month of work!! Ahhh!!!