Locally, they convinced the Memphis City Council to adopt LGBT-inclusive workplace protections for city employees last year. And they're currently fighting some anti-gay bills going through the state legislature, like the nationally infamous "Don't Say Gay" bill that would ban discussion of homosexuality in Tennessee schools.

Every year around Mardi Gras time, TEP holds this gumbo contest. I had the only vegan (or even vegetarian) gumbo this year, so I was up againt all sorts of meaty stuff. Here's my team table. We were called Who Dat Crunk Vegan? (a reference to the popular "who dat?" New Orleans Saints support chant). 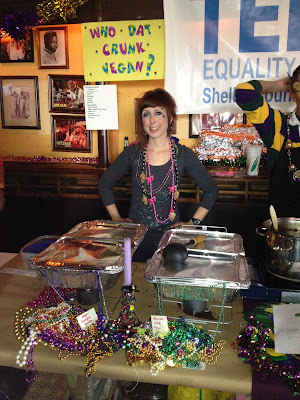 I'm not sure how many people came through and tried my gumbo for the People's Choice Award, but I went through two gallons (and only left with about two cups of leftovers). The bar where it was held — Earnestine & Hazel's — was so packed that people were crammed in shoulder-to-shoulder. I only had to explain what "vegan" meant to about two people out of the hundred or so who tried my gumbo! Most people were super excited to try a vegan gumbo.

Here's what all went into my gumbo: 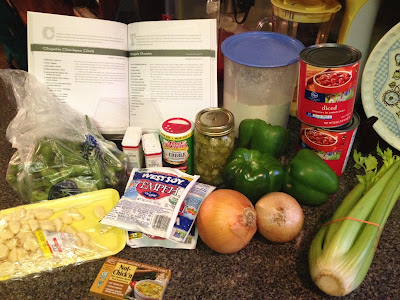 And here was the end result: 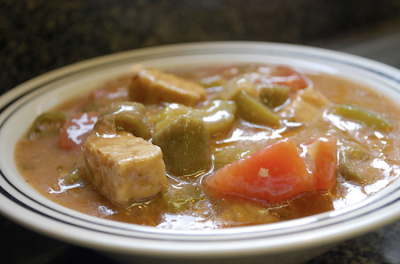 I didn't place in the awards, but that's okay. I was up against a lot of meat in a room full of meat eaters, but what's important is that the event raised money for TEP and I exposed some people to vegan food for the first time! Who dat?!
Posted by Bianca at 8:14 PM

Good for you! It's awesome that you were there representing.

You made people aware that there are alternatives to using meat in traditional foods. I'll bet you got people reconsidering their food choices. Good on you!

who dat?! you go girl for being the only vegetarian/vegan contestant! bringing awareness to vegan alternatives is so important and how fantastic is it that most of your jumbo was gone by the end of the day! i also love the cause. awesome post!

Wow, you are awesome — it's especially wonderful seeing an intersection of vegan + LGBTQ causes. Now I'm even more stoked to receive your cookbook and craft up this gumbo! Peace and <3 from Metro Detroit!

Way to represent, it looks delicious!

Hey, that's some badass awesome activism, I'm super impressed you did that! I feel like I would just be intimidated. But there's really no downside at all!

Reba- Not So Perfect Life said...

I would be nervious to bring the only vegan dish to a non-vegan cook-off. Cudos to you! How was the crowd reaction to your vegan dish?

I recently entered my first cooking competition as well (baked goods). It was so much fun and something I've wanted to do for ages! Entering such things is fun - even if we don't win.