My BFF Sheridan turns 32 on August 8th. But since that's a Wednesday, she decided to celebrate the weekend before. Sheridan lives in Little Rock, Arkansas, a short 2-hour drive from Memphis, so I made the trip Saturday afternoon in time for birthday dinner at The House Gastropub.

We started the festivities with Arkansas craft beers. Sher's drinking some kind of pale ale, and I started with a creamy stout. Later in the night, we switched to espresso bombs (a shot of espresso dropped into an IPA): 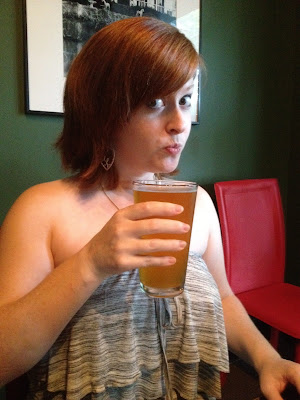 Sheridan had a modest crowd since many of her friends were out of town for the weekend: 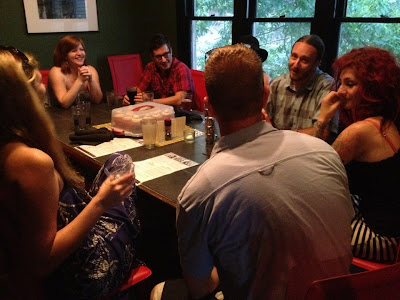 Sheridan, her partner Drew, and I all ordered the House's Vegan Burger. It's one of a couple vegan menu items (there's also a Thai green curry bowl). I was in a burger mood, and this giant black bean, pumpkin seed, and rice patty on foccacia bread with beer BBQ sauce and caramelized onions did not disappoint. Oh, and the house-made herbed fries with curry ketchup were delicious too! 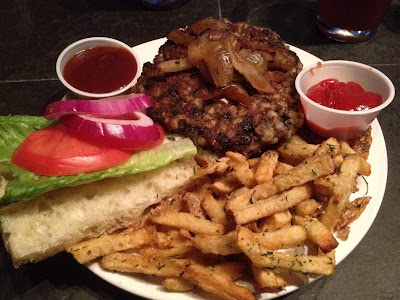 Sheridan and I could only eat half of our monster burgers, so we saved the rest for post-pool party snacking (we went back to Sheridan's apartment after dinner to swim).

After our bellies were full of burgers, we still had to eat one more thing — cupcakes!! I made the Lemon Blueberry Creme Cupcakes from Vegan Cupcakes Take Over the World: 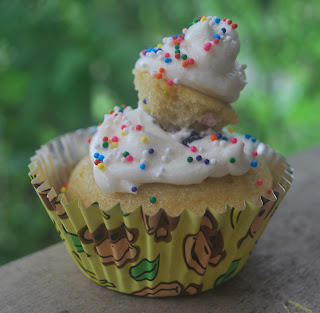 These are lemon cakes with hollowed out centers that are stuffed with blueberry compote and topped with lemon buttercream. Yum!

More on Little Rock eats tomorrow. We ate brunch at an adorable cafe called The Root Cafe, but it deserves a post all of its own.
Posted by Bianca at 12:33 AM

Sounds like you all had fun. That vegan burger looks delicious! My dad's birthday is also on August 8. :)

The burger and cupcakes looks awesome.Sounds like lots of fun! Hope sheridan has a great B-Day!

YUuuuum! This is like my dream dinner! Would love to know what's in that beer BBQ sauce.

Those cupcakes are so cute!! :)

happy birthday to sheridan! those burgers look AMAZING. those cupcakes are such a hit. i made them for my friend's wedding and everyone loved them.

Aww happy birthday to Sheridan! It sounds like a really fun birthday celebration :) The espresso bombs sound really intense but I guess it wouldn't be any more intense than a vodka red bull (ew)? That burger looks and sounds so delicious and it is very cool that they had some vegan options! The cupcakes look perfect! Great choice, I love blueberry and lemon together. Such a great combo :)

I love the Root, and the Bahn Mi and Shitake burgers are our favorites. We always seem to go to the House during brunch, so I was excited to see their vegan burger.

Next time you are in town, you should check out Four Square in the River Market. Chang Thai out in Sherwood is a treat, too!

I do like those House burgers; I always forget to go there. Happy birthday, Sheridan!!!