I typically post photos from one special meal of the day. But every once in awhile, I like to give y'all a glimpse of what I eat all day long. As much as I talk up fried food and ramen, I don't actually eat that stuff on a daily basis (although I do tend to eat a few bowls of ramen each week). I typically eat pretty healthy, and today was a good example of that.

I started my morning around 6 a.m. with an Apple Jack Smoothie from the 2012 Happy Herbivore wall calendar. This tastes EXACTLY like Apple Jack cereal in a bowl of milk, but it's actually made of good-for-you stuff like spinach, apples, bananas, dates, plant milk, and cinnamon: 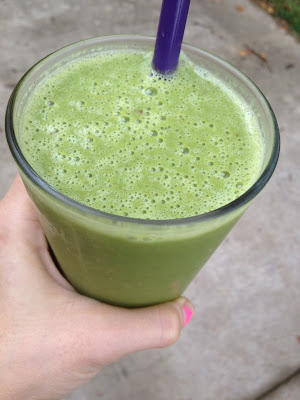 Then I went for an hour run through Overton Park. After my run and shower, I had my second breakfast — a bowl of Chocolate Soynut Butter & Ricemallow Cream Oats. Like a peanut-free Fluffer Nutter with chocolate! 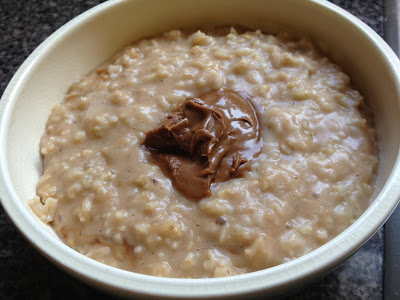 I tend to have a mid-morning snack of nuts or trail mix at my desk at work, but this morning, the oats carried me through until lunch. That's when I had a plate of leftovers — my Tempeh Wellington and Hearts of Palm Salad (which I blogged about last night). About 90 percent of my lunches are leftovers from the night before. I ate this at my desk since Monday is deadline day: 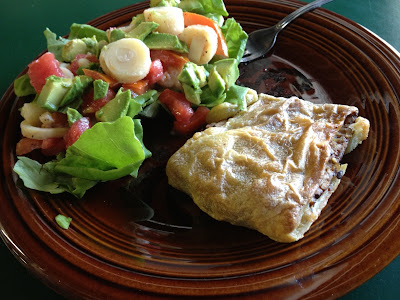 The puff pastry on the Wellington wasn't as flaky when re-heated. But it was still tasty. I don't mind the diminished quality of some leftovers. Food is food, and I enjoy just about everything — fresh or not. I just like to eat.

Around 4 p.m., my tummy started grumbling. So I went to the breakroom and grabbed my afternoon snack — Carrots and Roasted Red Pepper Hummus: 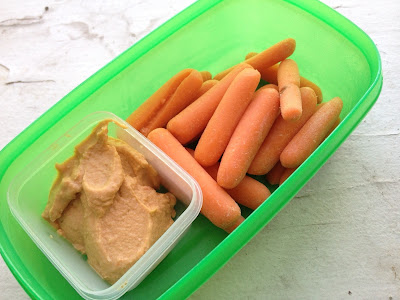 I only cook dinner a couple nights a week, and the rest are spent eating leftovers or cobbling things together. Tonight was a combination of both. I made a Vegan Patty Melt using an Amy's All-American Burger, Wayfare "We Can't Say It's Cheese" Cheddar Spread, pickles, lettuce, and ketchup on "buttered" whole wheat bread. Better than any fast food burger I remember: 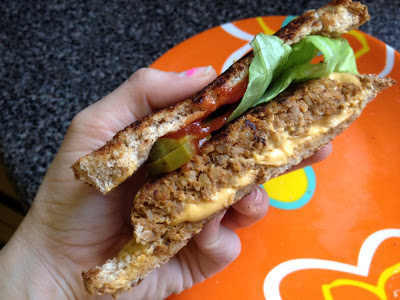 On the side, I had some leftover Summer Tomato Salad, a recipe from Cookin' Crunk that I made for a picnic at a Duran Duran concert on Friday night. It has fresh summer tomatoes, cucumbers, a yellow bell pepper from my front yard garden, red onions, and a sweet-n-savory homemade vinaigrette: 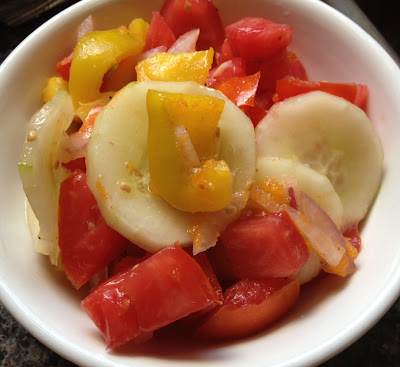 So there you have it. That's a pretty good example of what this vegan eats in a day.
Posted by Bianca at 10:50 PM

at least you got some chocolate in the morning. that's my favorite time of day for it too. ;-)

Looks like a pretty great day of meals! That smoothie sounds delicious, I may have to try and figure out the recipe from the ingredients :) THe oats sound decadent and amazing. That burger looks pretty perfect too! Very yummy day :)

That smoothie sounds interesting- I used to looove apple jacks! And I'm the same way as you are with leftovers- as long as it's still tasty I don't need it to be as "perfect" as it was the first time around. I'm actually a HUGE fan of leftovers!

what a great day of eats! i'm definitely going to have to try that applejacks smoothie!

I think it's the first time I see what you eat on a regular day and I'm quite jealous. Everything sounds very delicious. Don't hesitate to do more food diary posts. They're fun! Although I know they can be a bit time-consuming for the blogger who writes it.

Good to know I'm not the only one who enjoys second breakfast, ha ha. :) Also - Duran Duran + picnic? So jealous! The cheddar spread on that burger looks really nice, too bad they don't sell it around here. Yet. :)