Of Art and Bread

Rudi's Organic Bakery, the maker of some pretty yummy vegan-friendly breads, has partnered with Chef Ann Cooper to "revolutionize" school lunches. If you're not familiar with Chef Ann Cooper, she's the bad-ass Renegade Lunch Lady who has made it her mission to advocate for healthier options in school cafeterias. 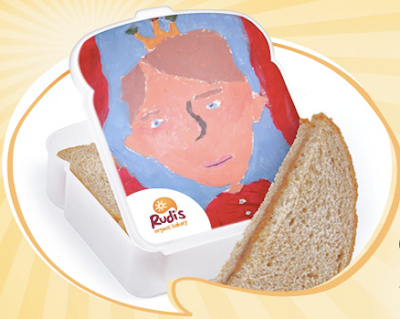 Anyway, earlier this summer, Rudi's (click here for a handy list of their vegan breads) invited fans to create artwork for reusable plastic sandwich boxes for its "Let's Doodle Lunch" contest. More than 18,000 designs were submitted, and fans had a chance to vote for their fave between July 1st and 31st. For every fan who voted, Rudi's donated $1 to Chef Ann's "The Lunch Box" campaign. The winning box will become Rudi's official reusuable sandwich box, and anyone with three proofs of purchase can get a free one from Rudi's between now and September 30th. For every sandwich box sent out, they'll donate another $1 to Chef Ann's cause.

The winner hasn't been publicly named yet, and I don't know how much was raised. But nonetheless, Rudi's has offered to give away a fun art kit to one lucky Vegan Crunk reader as part of the promotion. The art kit, which would be awesome for someone with kids or someone who is a big kid at heart (like me!), contains a collection of paints, markers, and colored pencils, a sketch pad, a reusable bag, a beret (fun!!), and coupons for Rudi's. 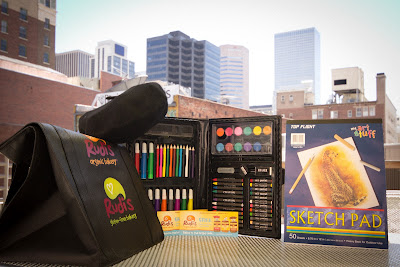 I don't usually do non-food related giveaways, but I love Rudi's bread. And I think this is a great cause. The more we can spread the word and support healthy school lunches, the better.

For a chance to win the giveaway, just leave a comment letting me know your favorite sandwich. That's it. I'm not doing the whole Facebook/Twitter for extra entries thing this time. No reason. But feel free to tweet away anyway!

I would have to say Tofu Banh Mi.

J says bahn mi. A says italian sub with provolone and olive dressing and also tomato sandwich -- but only in the dead of summer. :)

Hilarious! I just did a post with a similar style title! :)

My faithful favorite is peanut butter, blueberry jam, kiwi or strawberry slices and cinnamon...superyumful!
I've heard so many good things about Rudi's and this is even better. Thanks for the info and the giveaway. Cheers!

Looove vegan Nutella and some kind of berry jam, usually strawberry. Or a vegan BLT, if I'm in the mood for something savory.

A grilly. A grilled cheese with kale and onion, Daiya of course. Also, is Cookin' Crunk going to be available in e-book form? I'm so stoked!

My favorite sandwich is leftover baked tofu with a bit of veganaise and some lettuce.

This is a great giveaway.

Anything with pickle. Pickles make nearly any sandwich better, except maybe something with jelly on it.

Thanks for the no FB/Twitter! I don't do either and I get frustrated when so many blogs require it! My favorite sandwich is almond butter, banana, cinnamon, and raisins on some homemade soda bread. Mmm mmm!

my favorite sandwich is definitely chickpea salad on whole wheat bread with tomato and sprouts. Yum!

I LOVE sandwiches! My favorite is with some sort of vegan deli slices or Field Roast, vegenaise, sweet/hot mustard and lettuce and maybe a slice of vegan pepperjack.... Mmmmmm

Favorite sandwich?! Hm, I can try to narrow them down...pb and banana is always good, especially with cinnamon. Tempeh mashed up with vegan mayo and mustard, on toasted bread with some vegetables. Or a family classic that sounds disgusting but is amazing I promise: almond butter, (vegan) mayo, and cucumber slices. On whole wheat.

I love a good chickpea salad sandwich. And then you can't beat avocado, tomato, and lettuce. Oh, and of course the classic PB&J.

My fave sammy is a veggie delight from subway!!! Rocks my world :P

I love Rudi's bread! So yummy with a vegan blt mmmmm...

You can't go wrong with PB&J. And old favorite! Kate

chip pea salad is a good one, but a tomato sandwich in the peak of summer cannot be beat!

Peppered Tofurky Deli slices with mustard and whatever veggies are hanging out in the fridge.

I have a few favorite sandwiches but right now I seem to be really going for almond butter with sliced bananas. There is something decadent about it, especially on a grainy bread.

Definitely peanut butter (no jelly tho...). It's a classic, although I feel like if you put anything on bread, it will probably be good!

it's not exactly a sandwhich, but i love a classic hummus & raw veggies stuffed pita pocket. this is a great cause, being a lunch lady myself, during the school year i am disgusted daily by what we have to feed the kids!

Aww how fun! I love this! My favorite sandwich is a tie between a hummus veggie sandwich and a peanut butter and banana sandwich. Yum!

It's a toss up between my all-time go to sandwich of peanut butter and fruit spread, maybe with some fresh fruit slices or unsweetened coconut flakes thrown in the middle... OR avocado, sprouts, tomato slices and spinach (and many other veggies from time to time) on hearty, thick toasted grain bread with something like hummus or stoneground mustard.

My current sandwich obsession is eggless egg salad (aka tofu salad) with lots of red onion and tomato.

Grilled tempeh reuben sandwich from the Jan-Feb 2010 issue of VegNews. Just thinking about this sandwich elicits a satisfied gustatory sigh.

Reuben vegan style with avocado and panini pressed. Dill pickle on the side. Delish!

There are so many to choose from, but my all-time favorite would have to be tempeh bacon, lettuce, and tomato, with a little bit of Veganiase spread on toasted bread. The only thing that can make it better is home-grown tomatoes from my garden!

It's a tie between tempeh-lettuce-tomato or a basic veggie with avocado.

Tempeh bacon sandwich from Busboys and Poets in DC, it's hard to order any of the other awesome vegan things on their menu because that sandwich is so good...

My favorite sandwich right now is a panini with hummus, mushrooms, onions, spinach smashed and heated until the hummus melts like cheese.

three slices toasted bread, a layer of chipotle mayo on each. on the first piece add a slice of vegan bacon, and lettuce and top with second slice. top that with tomato and roasted tofurkey slice and more vegan bacon and avocado. add final slice, mayo side down and eat.