I really don't eat enough beans. They're so natural and whole foods-y. But I tend to eat more tofu, tempeh, seitan, and fake meaty stuff. When I see bean recipes, I usually just pass them by. But for some reason, I was drawn to Scott Jurek's Smoky Chipotle Refried Beans from Eat & Run. Probably just because ultramarathoner Scott Jurek came up with them, and well, he's awesome: 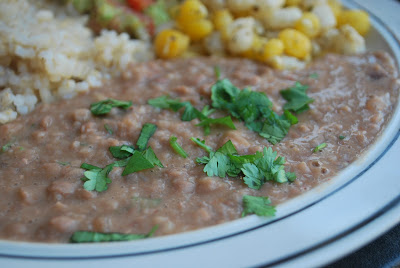 These are real made-from-scratch refried beans. I boiled some pintos in a Crock Pot with chipotle chilies, onions, and kombu. Then I pureed the beans and lightly fried them in olive oil. Wow! I've never made homemade refried beans. I don't think I'll ever eat the canned stuff again. Luckily, this recipe made 6 cups of refried beans, so needless to say, some are in my freezer.

On the side, I made some Jalapeno Fried Hominy from my cookbook — Cookin' Crunk: Eatin' Vegan in the Dirty South (due out any day now, y'all!): 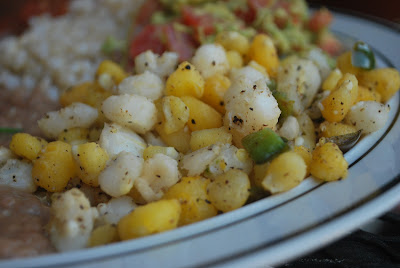 I grew up hating hominy, but I learned to love the stuff when I tried my friend Wes' fried hominy. His recipe (with my own addition of fresh jalapenos) is in my cookbook.

Here's a full plate shot. Looks as good as any Mexican restaurant, right? You've got your rice and beans, hominy, homemade guac, and salsa. Ole! 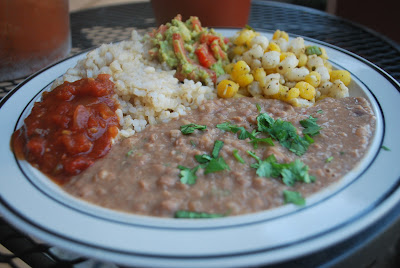 Homemade refried beans are the best! We make big batches and eat burritos and tostadas for days on end. :)

What a great looking plate of food! I could eat the heck out of that. Homemade refried beans are such a wonderful, simple pleasure. I'm hooked on the Homestyle Refried Beans from Viva Vegan. So good!

Omg that plate looks like you are eating in a Mexican restaurant for sure! It looks so perfect. I've never had homemade refried beans but I've always wanted to try them. Every time you post with a recipe from that book it makes me want it more! I may have to put in an amazon order soon :X

I had a ton of black beans so I did Jurek's refried beans with black instead of pinto. Great idea with the hominy. That is one beautiful looking plate.

those look incredible! i love the hominy!

I know what you mean about getting into the meat-subs and just leaving off the whole bean.. Still they'r probably better for you.

The plate looks amazing. What about a few corn tortillas on the side to scoop up all that goodness?

Oh my gosh, Bianca, that looks like the most amazing meal! I just had refries for lunch today... but they weren't homemade and they didn't have a million other tasty side dishes all over the place. Mmmmm!

Those are some awesome looking beans.

My hubs makes the best homemade refried beans. That hominy dish looks great. I can't wait to buy your cookbook.

I love homemade refried beans! They are so easy yet so unbelievably tasty and satisfying!