On Sunday morning, I was flipping through a Rolling Stone in the bathroom of all places, when an ad for a frozen very non-vegan pizza caught my eye. Suddenly, I got the world's most intense craving for cheesy pizza. I was planning to buy groceries later that day, and I considered grabbing a frozen Tofurky pizza from Whole Foods.

But I have all these free packs of Vegan Shreds from Galaxy (thanks Galaxy!), and I have a front yard garden of ripe peppers that desperately need to be used. Plus, it was a Sunday, which meant there was plenty of time to make a homemade crust. So that's just what I did.

I whipped up some crust using my old stand-by recipe from Vegan with a Vengeance. I oven-roasted some red and yellow bell peppers and some jalapenos (all from my pepper garden). And I oven-roasted some garlic in olive oil. I threw together a homemade sauce (also from Vegan with a Vengeance). Then I layered the veggies, sauce, and Galaxy Vegan Mozzarella on the crust and baked it. The result was a delicious pie that likely far exceeded the taste of that non-vegan frozen pizza that launched my craving in the first place.

Check out my Roasted Pepper and Garlic Pizza: 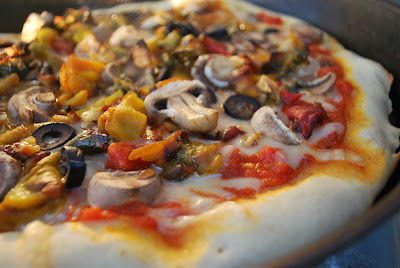 Since I used Vegan with a Vengeance for the crust and sauce, I can't share those recipes. But I will share the basics.


Preheat the oven to 450 degrees. Line a baking sheet with aluminum foil.

Stem and seed the bell peppers. Stem the jalapenos, but do not seed (unless you're scared of spice and then I guess you can seed ... but you're a wuss).

The peppers should be mostly blackened when you remove them from the oven. Place the peppers in a bowl and cover with plastic wrap for about 15 minutes. This steams the skin so it's easy to remove. Set the garlic aside.


Dump the peppers onto a cutting board, and use your fingers to work the skin off. Discard the skin and chop the peppers.


Spread the sauce over the crust, leaving a little room on the edge for the crust. Add cheese, chopped peppers, mushrooms, and olives. Open the garlic foil and use your fingers to squeeze the soft, roasted garlic onto the pizza in various places, distributing evenly.

Bake for 8 to 10 minutes if using a homemade crust. If using a storebought crust, follow package instructions.

That looks perfect, now I really want pizza! I always use the WVAW base & sauce recipes and I have some FYH in my freezer, I think I know what's for dinner!

yum! this looks and sounds amazing! can't wait to try it myself!

I love pizza, and that one looks YUMMY!

That pizza is picture-perfect.

Would you mind sharing pictures of your pepper plants in a post? That would be fun =)

Are you growing anything else?

This pizza looks amazing! I think homemade pizza is always better than frozen and it looks like the effort definitely paid off!

Babette, sure will!! That's a great idea for a post...I may do that one day next week!

What a delicious pizza recipe!!

I know I haven't commented in a while, but I AM always reading :D

You left a recipe, hallelujah! PLEASE leave recipes every once in awhile. I love your site, but sometimes I get frustrated because you never have recipes for the yummy looking food you post!

This in combination with watching someone make pizza on Food Network makes me REALLY want some good, vegan pizza with LOTS of veggies. We will definitely be having some this week.

oh wow -- my mouth is watering! that looks incredibly delicious!

Oooh this looks tasty. I'm making it tonight. Thanks for sharin', lady! :)