If you've not yet discovered Vegan Cuts, you're missing out. I had the pleasure of meeting (and drinking with) the site's co-founders, Jill and John, at Vida Vegan Con in Portland last August. They are awesome, and so is their website. It's like Groupon for vegans. Amazing vegan products are offered for a limited time at highly discounted rates.

Their marketplace is loaded with goodness (kale chips, vegan designer handbags, gluten-free cake mixes, shoes, and jewelry), all offered at discounted prices. And one of the very special items offered right now is something I've been dying to try since I first read about it in VegNews a few months ago — Choc & Nut Spread: 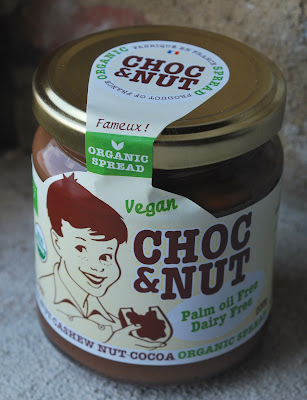 A high school French teacher introduced me (and the rest of my French class) to Nutella years ago. She brought a loaf of good bread and a jar of Nutella to class. As we all sampled the chocolatey-hazelnutty goodness, she told us that Nutella and bread was what French kids ate for breakfast. I fell in love with Nutella.

Fast forward to 2004. I went vegan, and not long after giving up dairy, I made an alarming realization: I could no longer eat Nutella because, to my surprise, it contained dairy. My life was officially over. But over the years, a few brands have introduced vegan versions of the chocolate hazelnut spread, and plenty of recipes for a homemade version are available online. That sustained me. But none were quite like Nutella.

That is, until Choc & Nut came along. This stuff is much more like the real thing, probably because it's made in France. And the French know how to do chocolate and hazelnuts right. Also, unlike some other vegan versions, Choc & Nut has that milky taste. It contains soya protein, and I think that might be the answer to achieving the milky creaminess that Nutella has. It also contains cashews, and maybe that makes it kind of creamy too.

When my review jar arrived at work, my co-worker Hannah wanted to try it. So we cracked it open. She spread some on a banana, and being the classy person that I am, I stuck my finger straight into the jar. We both oohed and aahed, but Hannah, who has eaten Nutella more recently than me, said the Choc & Nut could use more sugar. I didn't think so at all. It seemed plenty sweet to me. In fact, cane sugar is the first ingredient in this stuff.

This morning, I spread some Choc & Nut on whole wheat toast and downed it with a glass of coconut-almond milk: 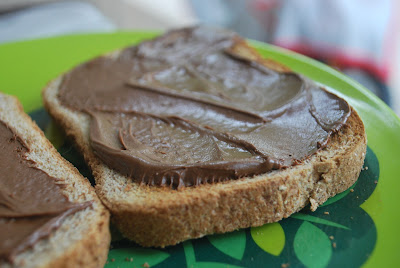 Anyway, you can order 3 jars of Choc & Nut on Vegan Cuts for $19. That's a bargain considering 3 jars would normally run you about $27.

And, because you're a Crunk reader, if you order between now and October 31st, you get a 10 percent off discount using the promo code BLOGFRIEND.

On a less chocolatey note, I was a little late in picking a winner in the Juice Here Now e-cookbook giveaway. Oops! But the lucky random winner is ... Gluten-Free Happy Tummy!
Posted by Bianca at 10:58 PM

hmmm i was really disappointed with this stuff. i really wanted to like it b/c i miss nutella a lot. but it tasted like slightly choclatey chalk to me :( i'm glad it exists tho and that's cool that folks who like it can get it cheap!

This stuff is SO addictive! And I can't help but laugh that you learned about Nutella from your French teacher since Nutella is Italian. We got 'em again! :P

Maybe due to the UK's proximity, Nutella has always been a big deal here. I love hot toast with melty chocolate spread. Have you tried Humdingers Chocolate Spread? Its a nut free Australian brand.

Have to give this a go as I miss Nutella. Have people tried Ficoco (fig and coco spread?). I saw in local grocery store in DC (Giant) and brought to a picnic at a winery. I thought was pretty tasty. http://www.ficoco.com/

When I saw this post, the first thing that came to my mind was Nutella and how much I love it. This really looks delicious. I'd love to have some toast with that Choc & Nut spread right about now myself! Thank you for sharing! I'll check out their website.

Ooh, that is good news for dairy-free people!

Yum this stuff sounds delicious! I haven't had Nutella in years! I'll have to check this stuff out, thanks for sharing!

oh my gosh that stuff sound outrageously delicious! i could not be trusted with a jar of that stuff in my apartment! haha and thanks again for the giveaway! I'm so excited! :)

I came really close to getting that, but didn't. Now I wish I had!

Just wanted to mention that my local library in Ottawa, Canada has your book - but there's a line-up to check it out so I'm still waiting. Thought you might think that is cool!

Oh wow Anardana! That is cool! Thanks for telling me!

Sorry, but I was very disappointed with this stuff. Before I became a vegan, I enjoyed Nutella a lot. Choc & Nut is nothing like Nutella. When I saw "Choc & Nut" being offered as a deal on Vegan Cuts, I ordered three jars of it. I find that it tastes like cheap chocolate with a slightly nutty aftertaste. If you close your eyes and concentrate, you can detect a hazelnut flavor.

Sadly, I must go back to making my own home-made Nutella (which is still not as good as the original but is better than Choc & Nut).