Better Than Sugar or Honey

A few years ago, after reading Skinny Bitch, I attempted to give up as much granulated sugar as possible. I switched from white sugar to evaporated cane juice (which is guaranteed to be vegan while white sugar can be questionable) in baked goods. That was an easy switch. But in my attempt to cut down on the more refined granulated stuff, I started using agave in my coffee. And I grew to love it even more than sugar.

Now I know there's some agave controversy these days. Is it the same as sugar health-wise? Is it worse? To be honest, I really don't care. At the time I switched, it was a health move. But my healthy changes are always phases. I'm not a health food vegan. I'm an ethical vegan, and I like things that taste good. I also like things that aren't honey that taste kinda like honey. Agave haters, don't hate.

Xagave offered to send me a bottle of their raw organic white and blue agave to review. And they sent me a giant bottle! 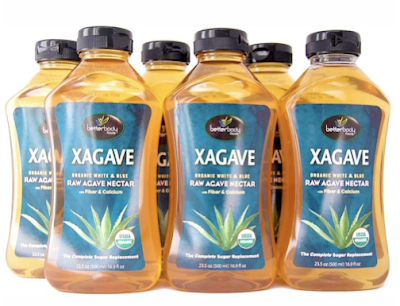 First, I tasted it by itself. Tastes like agave. All the brands I've tried taste about the same. Then I put some in my coffee. Delicious! 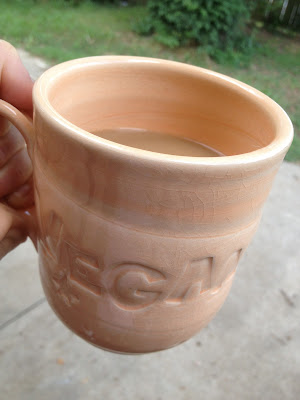 Since just using the agave in my coffee would make for a boring review, I decided to make one of my favorite fruit salads that calls for agave — the Classic Ambrosia from Raw for Dessert: 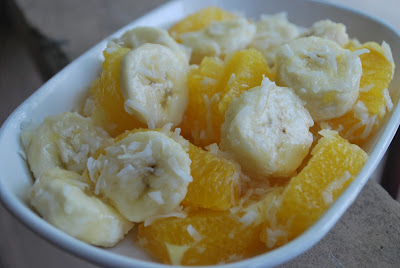 It's just banana and orange slices mixed with dried, unsweetened coconut and agave. So simple, and yet so satisfying. I'm not a huge fan of fruit, but I do love anything with coconut. And bananas are my probably my second fave fruit. The agave adds a touch of decadence to an already naturally sweet salad.

While I didn't notice a huge difference in taste with the Xagave over other brands, I do love that it contains both calcium and fiber. I'm always trying to work more calcium into my diet, so I can avoid supplements.

I also like the packaging better than most other brands. The back of each bottle contains a Sugar Exchange Table, which tells you how to convert sugar measurements to agave measurements in baking, cooking, and beverages. I've always been scared to bake with agave unless a recipe calls for it because I've never understood the exchange rate.

The chart also shows the calories saved my using Xagave over sugar. Since its sweeter than sugar, you don't have to use as much and, thus, you save calories. Let's see – it's tasty, it's sweet, it contains calcium and fiber, it's not mean old honey, and it can save you calories because you use less. That's a winner in my book.
Posted by Bianca at 9:57 PM

great review! i'll have to keep my eyes open for this product!

Cute mug! I have one that's similar from Jeanette Zeis too, and I love it! I agree, I can't manage to get myself worked up about agave. It's the main sweetener that I use, and if it's actually more processed than some claim, oh, well. I don't expect or need my sweetener to be a health food. It's something that I use sparingly.

Sounds like a great product! The ambrosia sounds fantastic! Nice and simple but a beautiful dish and I definitely want to give it a try! :)

Explaining the difference between health vegans and ethical vegans can be so difficult to people sometimes! I am still not fully on the agave wagon. Cane sugar is just so convenient, but maybe I will give this brand a chance.

That stuff sounds good (and like you said, if it saves calories!)

Yum! Ill have to try that. And I really like that it has the exchange.

I love Xagave! I use it to make sweetened almond milk in my blender when I want something yummy. Mmmmmm!